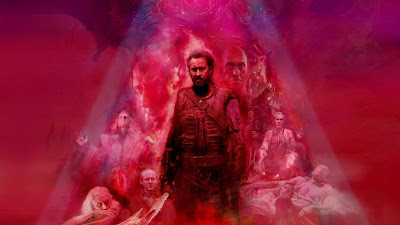 One of my most anticipated movies of the year does not disappoint.

There will never be another Nicolas Cage. Sure, he takes a lot of shit these days for making so many movies and exercising what appears to be very little quality control. He's also been embraced ironically over the last decade or so by hipsters who "love" Nicolas Cage because he goes so big so often. Yeah, no shit Nicolas Cage is great, guys. They might as well be professing their love for bacon or Jeff Goldblum. There's nothing impressive about it.

What is so great about Cage -- and there was a time he was without question my favorite actor -- is that he's willing to take chances no other actor would take. Sometimes it's in a performance, whether it's doing a Pokey impression in Peggy Sue Got Married or shouting the entire alphabet in Vampire's Kiss. Sometimes it's in his choice of material. I can't think of another A-list, Academy Award-winning actor who would read the screenplay for Mandy and not just understand director Panos Cosmatos' wavelength, but be on it as well. When he's on his game, Nicolas Cage is a gift. 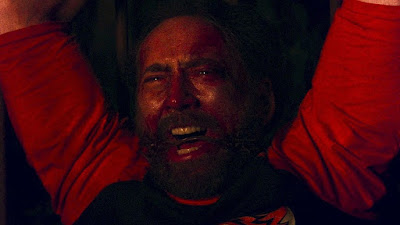 Mandy is a gift as well: one of the best movies of the year and what my friend Elric Kane would call "pure cinema." It exists to be not so much watched as experienced, so please don't just go see theatrically, but see it on the biggest, loudest screen you can. It is destined to be an all-time great midnight movie. It's not just because it's weird -- it is weird -- but because when the lights come up at 2 am and the credits begin to roll in near silence, you'll be positive you dreamed half of what you saw.

The story is the standard stuff of revenge tales: Red (Cage) lives a happy, quiet life in the mountains with his wife Mandy (Andrea Riseborough). She is kidnapped by a religious cult led by Sand Jeremiah (Linus Roache) and eventually killed before Red's eyes. He goes out for revenge. It's Death Wish meets Race With the Devil but with Hellraiser thrown in, too, all filtered through Cosmatos' colorful, wild, hallucinatory style. It's a crazy movie, for sure, but anyone looking for more action-packed, kicky B-movie fun like, say, Drive Angry, most likely won't have the patience for Mandy. This is a movie that takes its time, that holds on shots and allows us to absorb them, that lives in its moments both peaceful and nightmarish. Again, it's an experience. 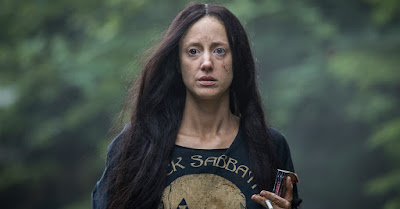 Cage is great at the movie's center. He has moments that are big but never showy. "Heightened" is probably a better word, because the entire universe in which Mandy exists is heightened. He knows just how to pitch his performance to match the material, completely buying into what Cosmatos has created. There is a scene that will undoubtedly be talked about as a class "Nic Cage scene," in which he stands screaming in a bathroom in a bloodied shirt and tighty whities. What the people who laugh at that scene from an ironic distance fail to understand is that it comes from a place of real pain, and Cage is never a fearful actor: he's going to feel everything deeply and hold nothing back. The genuine sadness and rage he exposes don't so much ground Mandy as it does guide it -- for all its trippy visuals and extreme violence, there's something real at its core. 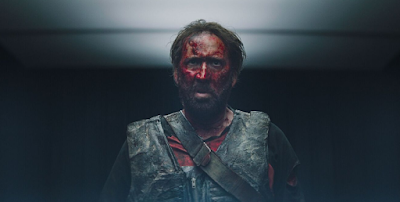 Even if Mandy isn't your bag -- and it's for sure not a movie for everyone -- you've got to appreciate a film that is so totally realized a very specific vision. Between this and Beyond the Black Rainbow, Panos Cosmatos' films don't feel like anyone else's. Benjamin Loeb's cinematography and the brilliant score by the late, great Jóhann Jóhannsson go a long way towards supporting Cosmatos' vision, making for an angry, violent movie that's more beautiful and hypnotic than it is assaultive. It's so good to see Nicolas Cage back in a film that rewards his bold approach to acting, because Mandy is bold and uncompromising, too. It feels like exactly the movie it wants to be. Cinema is better for it.

Mandy opens theatrically in limited release and will be on VOD platforms tomorrow, September 14.