Second Comings: Dawn(s) of the Dead 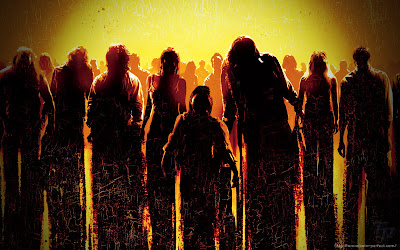 As someone who used to be impartial to anything that dealt with zombies, I thought it would be interesting to revisit the movie that changed that forever and its remake, which celebrates its 13th birthday this week. Before having seen George Romero’s 1978 masterpiece, Dawn of the Dead, I would argue that “zombie” movies all followed the same formula and that zombies (and movies about them) were lame as hell. Upon recently revisiting both the classic and its 2004 remake (Zack Snyder’s directorial debut), I realized that I was VERY wrong. How could that be true when even a zombie movie remake could be SO different from its iconic original? In the case of Dawn of the Dead, it’s almost like watching two completely different movies, which in turn makes my job here a little harder. Either way, here I go. 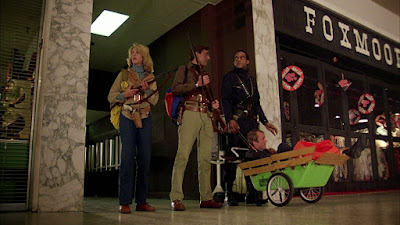 One of the most notable differences between the 1978 and 2004 versions is their band of survivors, our protagonists fleeing a widespread zombie outbreak by taking refuge in a shopping mall. In the original, we have a much smaller and more closely knit group consisting of only four people: Francine (Gaylen Ross), her boyfriend Stephen (David Emge), Peter (the amazing Ken Foree), and Roger (Reiniger). Because the band is made up of such a small amount of people, the 1978 version of Dawn of the Dead has a much easier time developing its characters and making them feel like actual people. This may have a lot to do with the pacing of the film, too. Because the movie clocks in (depending on which cut of the original you watch) at a whopping 2 hours and a half, and because it is generally pretty slowly paced, it feels like we are really spending a lot of quality time with Romero’s characters -- almost like we’re there, too. We also get characters that are incredibly different from one another but each serve a vital role in the survival of the group. For instance, Peter easily assumes a leading position because of his experience as part of a SWAT team, while although Stephen has no combat experience he is the only one who is able to fly the helicopter that transports them.

Because the band of survivors in 2004 is way bigger, we don’t get to really know them or feel like everyone has a purpose in being there. It begins to feel like some are only there for kills. That being said, while this is usually a bad thing, I would argue that it isn’t in the case of 2004’s Dawn of the Dead. What makes it acceptable here is that (as I mentioned before) both movies are looking to serve a different purpose. While the original seems be a more emotional piece of scary social commentary, the remake feels like its intended purpose is to freak out the audience with incredible death scenes. What better way to provide more of these (still effective) kills than with more characters? This difference is also represented in the other characters found in both movies: the “zombies” (is there some unspoken rule saying that we can’t really even call them that? I feel like there is, or I totally made that up). In 1978, the zombies we get are classic and very true to what we think of when we hear the “Z” word. They’re extremely slow, almost mindless, they walk with their arms out, and the way to kill them is by getting to the brain. This works perfectly in the original because, again, it is much slower paced and it gives our four survivors a logical chance to defeat them or run. This doesn’t make them any less scary, though, especially because in the original the mall is infested with huge crowds of them. 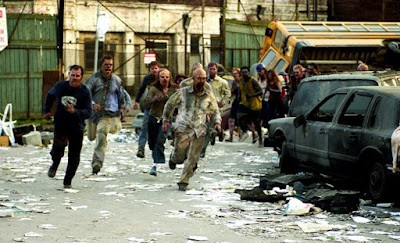 In 2004, Snyder completely breaks one of Romero’s important rules: Zombies DO NOT run. I always did like a rule breaker, though. I feel like the remake’s decision to have its zombies be way faster and more ready to attack than traditional zombies absolutely works. This could be because the remake is a lot more quickly paced, and slow zombies just wouldn’t work with the action packed kill-fest it was trying to be. The same applies to the original and its traditionally slow zombies. The zombies in 1976 were meant to represent mindless, creeping consumers (which is why they’re gathered in huge groups inside a mall, the mall was “an important place in their lives”). Romero’s vision was much more effectively executed by having the zombies walk at such an unhurried pace in huge groups, because that is exactly the kind of behavior we would expect from shoppers who are only concerned with thoughtlessly spending money on shit they probably don’t need. It’s hard to decide which approach is more effective when both work so well for their respective movies and accomplish exactly what their goal is effortlessly. 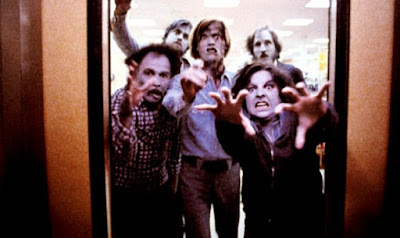 Because choosing whether I prefer the character approach used by the original or the one the remake uses is almost impossible, I think now’s a good time to look at where a bulk of the differences between each movie lies: the story. The plot differs so much between the remake and it’s original that they really become their own, and the only variable they seem to have in common is that the survivors take refuge inside a shopping center. As soon as the original starts, the audience is immediately thrown into chaos and into a world where the “zombie outbreak” has been in effect for some time now. The remake gives us time to witness the life of our protagonist (Ana as played by Sarah Polley) before all hell breaks loose and she is forced to leave her mundane, suburban life to lead one where she constantly kicks zombie ass. More importantly, as I mentioned before, the mall in the original has been already overtaken by a huge crowd of zombies. The survivors are really only safe inside of an office and are there not so much only for safety, but for resources as well. In the 2004 remake, our protagonists seek safety in a mall that has only been invaded by a few single zombies, until ultimately it gets surrounded by crowds of them that they have to fight off. Still, the characters are able to wander the mall freely without being worried that a mob of zombies is ready to eat them alive (they’d really only have to worry about one or two straggling ones). This difference is important because, again, it supports the goals of each respective version of the movie. The 1978 version blatantly serves as Romero’s social commentary on the horrors of consumerism, which is why having the mall be infested with tons of these mindless creatures is actually really hilarious. In 2004, by having the zombies be primarily on the outside, the survivors BECOME the consumers, taking advantage of all the free stuff they have around them, almost distracting them from the reality that they can’t stay in the mall forever.

This seems to be the only real conflict we get in the 2004 remake (I mean, besides the hordes of zombies OUTSIDE of the mall), so when the group decides to finally leave the mall it almost feels like a “just because” thing. In the Romero original, the mall gets over run by a crazy biker gang that wreaks havoc and contributes conflict between the humans, which eventually forces our remaining survivors to escape the mall. I’m not sure why they decided to completely omit the biker gang in 2004, because it would have given the survivors a more logical reason to leave. I still don’t think this is a major flaw, because we are also given interesting sub-plots in the remake that are well done and give it some emotional depth. For instance, there's a zombie baby that they’re forced to kill, which challenges the morality of our survivors and allows the audience to ask themselves what they would choose to do in that position. We are also met with the conflict of a father that has been bitten and his daughter begging the group not to kill him before he zombifies. These instances provide the remake with some substance that makes it more than just a careless gore-fest, which I can and do appreciate. 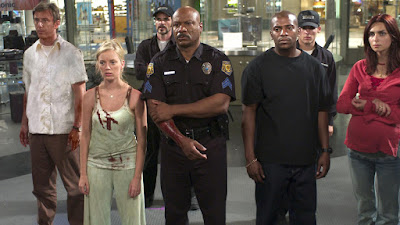 My favorite thing about both the remake and the original is the ambience they each set for themselves. Zack Snyder is most well-known for how (for lack of a better word) “comic-book” like his movies feel. I can confidently say that the same applies to his Dawn of the Dead remake. He uses extremely saturated colors and bright hues to create a sense of urgency in the viewer. Something horrible is going on and we can sense it. I also really particularly love this because it’s different for a horror movie to stray from gloomy and morbid colors and still effectively convey a dark, creepy atmosphere. Whenever the movie gives us a kill sequence, it feels like reading a panel straight out of a zombie comic book, and I absolutely love that. The original, while setting a completely different atmosphere, is just as effective. Where the remake strives to be saturated and striking, the original strives to be eerie but light and does so effortlessly. The lighting in the original mall is provided mainly by neon store signs, which makes the atmosphere almost hazy and glowy. It makes sense because it contributes to the dream-like (more like a nightmare), sluggish state that the zombies are in. This, accompanied by an incredible score by (my favorite) Dario Argento and Goblin, creates such a perfect eerie pairing that works flawlessly together. The remake’s music is also extremely well chosen. During one of my favorite scenes, an...interesting jazzy cover of "Down with the Sickness" by Disturbed plays as the survivors are seen having a grand ol’ time “shopping” while hoards of zombies collect around the perimeter of the mall. This isn’t the first time a happy song is juxtaposed with the horrifying reality of what is going on outside (and if you couldn't tell by now, I fucking love when movies do this). When our survivors first arrive, Bobby McFerrin’s "Don’t Worry Be Happy" is playing over the elevator’s PA system, and it’s awesome. In both the original and the remake, the accompanying songs felt like a match made in heaven (or in this case, Hell) and go impeccably with their respective movies. 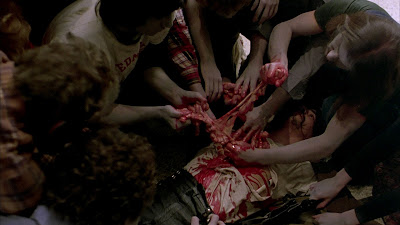 Because both movies are so different from each other, deciding which one reigns superior is not only difficult, but feels unfair. I loved both of these movies for very different reasons. Romero’s Dawn of the Dead was smart, hilarious, and thought provoking while still giving me the gore and guts I love so much in horror. Snyder’s rendition was so much fun to watch and never lost my attention for a second because it was so action packed and quickly paced. I would recommend both of these highly, but it would of course depend on what kind of movie the viewer is in the mood for. If I absolutely HAD to choose a favorite, I would probably choose the 1978 original because to me, it is flawless. That being said, I would still probably rewatch the remake more often just because it’s more accessible, shorter, and doesn’t require as much thought as it’s original. I’m so relieved both these films changed my mind about zombie movies, and I am now able to thoroughly enjoy them for years to come.