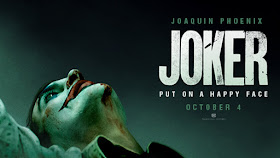 “I used to think that my life was a tragedy,” Arthur Fleck tells his mother seconds before smothering her to death. “But now I realize it’s a fucking comedy.” Todd Phillips’ Joker is a bit of both, in truth, but where one ends and the other begins will be the topic of debate for some time. For sure, Joker is a bleak and uncompromising parable that reimagines the Clown Prince of Crime as God’s Lonely Man. For sure, its stunning visual palette and knockout performances will earn continued attention this award season. For sure, its haphazard political message will be defiantly appropriated by a core audience too vulnerable to understand its deeper implications. Joker is full of images that will be GIFs and memes by the end of opening weekend. We all knew that was going to happen. We can’t stop it. The really confounding thing about Joker, though, is that it seems like exactly the kind of brutal, macabre, standalone story the DC Universe should be telling. It’s not Marvel. It’s not building a universe. It’s not interested in sequels or spin-offs. It’s making a statement. I respect that. But is a statement this misguided and irresponsible really worth making? 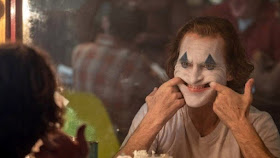 While it’s rife with visual and narrative references to classics like The Killing Joke, The Man Who Laughs, and The Dark Knight Returns, Todd Phillips’ film (co-written with 8 Mile’s Scott Silver) isn’t an adaptation of any one comic book story. It’s more of a blurry Joker watercolor that finds retail clown-for-hire Arthur Fleck (Joaquin Phoenix) clawing and scraping his way through a swollen and decaying Gotham City that looks like it’s about to fall into the mouth of hell. Trapped in a run-down walkup with his mother, Penny (Frances Conroy), Arthur battles to keep a variety of mental illnesses in check long enough to break into the stand-up comedy world. Every day, he tries to paint a cosmetic smile over his bruises. Every day, he tries to look on the bright side. Therapy helps him organize his thoughts (and write his jokes). A random smile from neighbor Sophie (Zazie Beetz) puts pep in his step. But when a trio of smarmy stockbrokers push him over the edge, Arthur becomes the unintentional leader of a socio-political uprising that brings Gotham City -- and mayoral hopeful Thomas Wayne (Brett Cullen) -- to its knees.

Joaquin Phoenix’s sinewy frame stretches like Silly Putty over every inch of Joker. The actor is Machinist-level thin, which pulls his features into a kind of gawking carnival mask. More Travis Bickle than Rupert Pupkin, Arthur is right at home in Phillips’ Gotham City, which trades Burton’s Art Deco and Nolan’s industrial realism for 1970s urban rot. Thanks to Mark Friedberg and Laura Ballinger’s art and production design, we can smell the blood on the walls and the sewage in the streets. We can taste the tar in each cigarette Arthur smokes. It’s a dank and hopeless world further emphasized by Phillips’ cinematography, which favors lingering close-ups over fast-paced action. Phillips and Phoenix also seem to know exactly how an innocuous moment can become uncomfortable, often using long stillnesses and silences as preludes to shocking events. Joker is, from a technical standpoint, an immaculately made piece of art.

But what does it all mean? Joker’s rich vs. poor dichotomy hits us like a sledgehammer from the opening shot: Fleck is at his makeup table, stretching his powdered face into a desperate smile while news radio reports the horrific conditions of Gotham City (“Is it just me, or is it getting crazier out there?”) and the entitled ignorance of one-percenters like billionaire Thomas Wayne. Though Penny considers Wayne a great man (stemming from an absolutely obnoxious plot development we’ll get into a bit further on), Arthur resents Wayne’s implication that he alone can save the city from Super Rats, or that those citizens who can’t pull themselves up by their bootstraps are “clowns” who deserve their destitution. Class signifiers are held up like billboards throughout Joker, and while Wayne and hammy late night host Murray Franklin (an excellent Robert De Niro) are easy targets of resentment, Joker muddies its righteous waters when it casts derision at minorities (notably black women) and, most uncomfortably, a little person (Leigh Gill).

These thematic concerns aside, we need to get back to Joker’s gigantic Wayne problem. Thomas, Martha, and -- you guessed it -- Bruce are all shoehorned in for a second act diversion exploring Arthur’s origins that not only brings the narrative to a screeching halt, but further complicates Arthur’s already fractured ideology. Wayne is both a lost father figure and a kind of economic gatekeeper, The Man who keeps Arthur and his kind down. There is a version of his story in which Arthur could assign very specific blame to very specific actions and act in light of their repercussions. But that’s not this story. Arthur’s actions are driven by fever dreams and hallucinations. He isn’t a class warrior or a community activist. He’s mentally ill. “I don’t believe in anything,” he tells Murray Franklin. Firing off a long tirade during his segment on Franklin’s show, Arthur tells the studio audience that all he wants is for people to show a little kindness every once in a while. He wants them to consider the people they step over as they walk down the street. As he murders a talk show host on live TV, Arthur believes himself to be a practitioner of chaotic good. 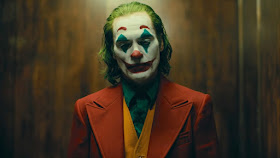 But depiction is not endorsement, nor are a character’s words always the best indicator of their actual intent. Let’s give Phillips and his team the benefit of the doubt; let’s assume that Arthur Fleck is a parodic figure. Let’s assume that Joker is actually taking the piss out of the thousands of clown-faced anarchists who rise up in the wake of Arthur’s chaos, that it’s holding a sober mirror up to the millions of dimwitted edgelords who co-opted Heath Ledger’s Joker or Hugo Weaving’s V for their short-sighted, anti-humanist ideology. Let’s assume Arthur is Tyler Durden. What, then, do we make of Joker’s cathartic closing moments? How do we reconcile the actions of the clown-faced Joe Chill, who leaves Bruce Wayne parentless in Crime Alley? Is Arthur Fleck a truly apolitical agent of chaos, or is he a victim of abuse, neglect, and mental illness, as the film suggests? Joker doesn’t answer that question. That’s being sold as an artistic choice (a la Taxi Driver), but it also may sink Joker upon further reflection. It all might be a big joke, but, as Fleck laments in his last scene, I wouldn’t get it.
Patrick Bromley at 5:00 AM
Share