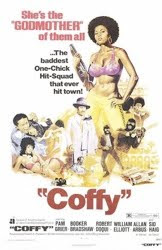 With Angelina Jolie kicking ass in Salt this weekend, it's time to look at some other action movies starring ladies. They can do all the same stuff as boys!

2. Red Sonja (1985) - I can't believe Brigitte Nielsen didn't become a movie star off of this one. It might have been the hair, which has at least influenced certain segments of lesbian culture. 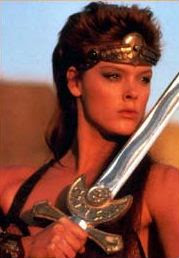 3. Point of No Return (1993) - The American remake of La Femme Nikita isn't as bad as you think. It's just kind of generic and Bridget Fonda doesn't make the most convincing action star -- which, I would argue, is kind of the point.

4. Coffy (1973) - Coffy kicks so much fucking ass. Not ironic ass. Sincere ass. Pam Grier is the shit. A fantastic movie.

6. Charlie's Angels (2000) - They're not dumb, they're cute, right? The action isn't all that great (because McG), but at least the movie seems to know exactly what it is. Spice World with wire-fu.

7. Aliens (1986) - Ellen Ripley is just behind Beatrix Kiddo for the most kick-ass girl in the history of movies. Like Tarantino, James Cameron gets that making a great female action hero doesn't just mean having her act like a man (though they both believe that strong women are defined by their maternal instincts).

8. Barb Wire (1996) - This single attempt to turn Pamela Anderson into a movie star -- even an ironic one -- rightly failed. I guess remaking Casablanca only much shittier isn't a formula for automatic success.