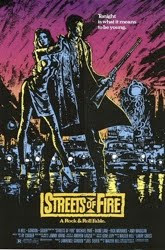 Inception is finally out in theaters today, and because we are human beings with sight we can all agree that it's going to be f'ing awesome. Let's F some more f'ing awesome movies.

4. Point Break (1991) - Because Johnny Utah. Between this, Speed and The Matrix, Keanu Reeves has starred in three of the best action movies of all time.

5. Star Trek II: The Wrath of Khan (1982) - Not just the best Star Trek movie ever made, but one of the best sci-fi films of all time. Great score, great story, great Shatner.

9. The Sure Thing (1985) - There's a large number of f'ing awesome John Cusack romantic comedies to choose from: Better Off Dead. Say Anything. High Fidelity. Must Love Dogs. Except not Must Love Dogs. This one's not actually the best of them, but it gets the edge today for one reason: the Zuniga Factor.

10. Phantom of the Paradise (1974) - We're talking about movies that are f'ing awesome, right? Right. That's why this movie is on here.
Posted by Patrick Bromley at 8:33 AM