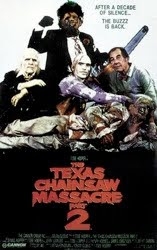 To celebrate the release of Predators (like the first movie, but with an S on the end), we're F'ing the F out of these horror movie sequels that are better than their reputations suggest.

1. Psycho II (1983) - On paper, the very suggestion of a sequel to Psycho is enough to make me never stop throwing up in my mouth. But instead of being something terrible Buck Henry would pitch in The Player, it's actually kind of awesome -- a slow-burn character study that, minus some additions to the mythology that I could have done without, is a great example of a movie that's better than it has any right to be.

3. Day of the Dead (1985) - It would be almost impossible to live up to the greatness of Night and Dawn, and Day of the Dead doesn't do it. Still, it's not as bad as many would have you believe, and has actually dated much better than expected. And, compared to Romero's zombie efforts ever since, it's Back to the Future. (Everyone says Citizen Kane. Fuck that.)

4. The Texas Chainsaw Massacre 2 (1986) - Make fun all you want, but I prefer this sequel to Tobe Hooper's grisly original. It's a strange, sweaty, uncomfortable mix of horror and humor and it's completely brilliant. One of the best horror sequels of all time.

5. Halloween 4: The Return of Michael Myers (1988) - An attempt to get the series back on track after the odd failure of Halloween III: Season of the Witch (aka There Are Snakes and Bugs in my Halloween Mask). Not a classic, but it at least tries to work in many of the same ways as Carpenter's original. Everything after this one would be the worst, but Dwight H. Little is the man.

6. Hellbound: Hellraiser II (1988) - One of the most fucked up movies you'll ever see. Also, one of the best realizations of hell on screen that doesn't involve Alex Winter in grandma makeup.

7. Wes Craven's New Nightmare (1994) - Yes, everyone agrees that Nightmare on Elm Street 3: Dream Warriors is the best of the Elm Street sequels, but that's because most people got bored by New Nightmare and bailed. This was Scream before Scream. It's a horror movie that feels like grad school, and I mean that in a nice way.

8. Final Destination 2 (2003) - The Final Destination movies are pretty much the worst for a lot of reasons, but this one rules because it's the only one that figured out how to correctly be stupid and gory and hilarious.

9. Saw VI (2009) - The Saw franchise has become the modern-day equivalent of the Planet of the Apes series, and this most recent entry was smart to take on the health care and insurance industries. Hardly sharp satire, but at least finds a reason to exist beyond just torture and awfulness.
Posted by Patrick Bromley at 10:48 PM