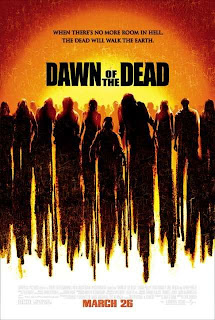 Alexandre Aja's Piranha 3-D is coming out this weekend, and we all know it's going to CG chew our CG penises off. Time to look back and F some past horror movie remakes.

1. Dawn of the Dead (2004) - Zack Snyder took one of the best and most relevant horror movies of all time and made it into a movie about nothing. Still, it's an awesome movie about nothing, with fantastic set piece (those first 10 minutes are holy shit) after fantastic set piece. I will never stop telling the post-credit coda to fuck off, but this is a damn good horror movie, remake or not. Also, zombie baby.

2. Halloween (2007) - One of the most controversial remakes of all time doesn't deserved to be loved or hated, but rather studied. Rob Zombie spends half a movie doing his usual white-trash f-bomb thing to discover "where evil began" (Michael Myers doesn't need an origin) and the second half of the movie slavishly imitating John Carpenter's original. It's a mess and I don't understand its existence and f you I still kind of like it.

3. The Thing (1982) - John Carpenter's "re-imagining" (barf) of The Thing From Another World is in a tight race with David Cronenberg's The Fly for Best Remake of All Time. Still my favorite John Carpenter movie (suck it, Halloween) and one of the best horror movies ever made.

4. The Hills Have Eyes (2006) - Alexandre Aja's first horror remake is totally 2-D but also kind of good. Yes, it's overly bloody and mean-spirited and someone drinks a bird, but it's hard to deny the movie's brutal effectiveness. It's also hard to deny Claire from Lost.

5. The Blob (1988) - If John Carpenter's The Thing and David Cronenberg's The Fly are the best remakes ever made, then Chuck Russell's take on The Blob (blub) is the most underrated. Frank Darabont wrote the script and Johnny Drama's mullet star in this endlessly clever, gory movie that totally kicks ass (blub).

6. Psycho (1998) - Because Alfred Hitchcock forgot to include all the jerking off.

8. House on Haunted Hill (1999) - William Malone's remake of William Castle's original should be filed under "better than it has any right to be." Yes, there is the terrible CG and the Chris Kattan and the Lisa Loeb roller coaster cameo (I'm just so scared to lose), but Geoffrey Rush is awesome and some stuff is genuinely creepy. For devoted genre fans only.