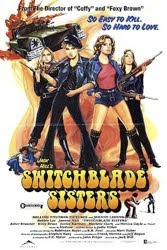 Robert Rodriguez's Grindhouse-trailer-turned-movie Machete hits theaters this weekend to remind us all exactly which Mexicans we should and should not fuck with. In its honor, let us F some genuine (not imitation) exploitation movies.

1. The Last House on the Left (1972) - Wes Craven remakes The Virgin Spring but adds way more horrible rape and murder and David Hess. Seriously hard to watch at times. You know what this movie needed? A Hollywood remake.

2. Switchblade Sisters (1975) - I wanted to put Coffy on this list, because that movie is incredible. Instead, here's another Jack Hill movie that totally kicks dick. So many badass chicks in one movie. AKA The Jezebels.

5. Death Race 2000 (1975) - One of the most awesome movies ever made. Paul Bartel directs David Carradine, Sylvester Stallone, Mary Woronov and Martin Kove in a movie that's violent and funny and colorful and cartoonish. Genuinely brilliant. You know what this movie needed? A Hollywood remake.

6. Chained Heat (1983) - Not the best women in prison movie (that would be Jonathan Demme's Caged Heat), but it still has naked Linda Blair and naked Sybil Danning and John "0.0" Vernon playing the evil warden. Not really good trash. Just trash.

8. Turkey Shoot (1982) - A great example of Australian exploitation (Ozploitation) directed by the great Brian Trenchard-Smith. A crazy futuristic prison movie with Steven Railsback and a hairy wolf guy. AKA Escape 2000.

9. Nightmare City (1983) - Mostly terrible Umberto Lenzi zombie movie has a few bright spots, including an undead raid on a TV station and a climax at an amusement park that predates Zombieland. Plus, a woman gets her boob bitten off because the movie is Italian.

10. I Spit On Your Grave! (1978) - AKA Day of the Woman. The ultimate in sleazy rape-revenge movies, here's a film that unintentionally transgressive and, if you can get past the nastiness (which isn't easy), ahead of its time. You know what this movie needs? A Hollywood remake.
Posted by Patrick Bromley at 5:53 PM