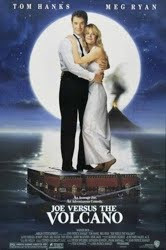 We can all pretend like we shouldn't care about The Social Network because it's the "Facebook movie," but let's admit to ourselves that it's going to be awesome for a number of reasons. And let's admit these movies are awesome, too. Let's admit it while we F them.

1. Once Upon a Time in the West (1968) - You know your movie is f'ing awesome when Charles Bronson is the least badass thing about it. Henry Fonda? Badass. Jason Robards? Badass. Such a kick ass movie. Also, Claudia Cardinale.

2. Joe Versus the Volcano (1990) - How the fuck have more people seen Sleepless in Seattle or You've Got Mail than this? Such a beautiful movie. I forgot how BIG. Thank you for my life.

3. Blade Runner (1982) - It's been ripped off so many times and re-released in so many different iterations that you might not think that Blade Runner is one of the best movies ever made. You would be wrong. Too bad she won't live. But, then again, who does?

5. The Long Goodbye (1973) - Robert Altman's take on Philip Marlowe is one of the shaggiest, most unconventional and best detective movies ever made. Elliott Gould mumbles and is awesome. Arnold Schwarzenegger shows up. Every song on the soundtrack is a variation on the theme song. Robert Altman made an insane number of great movies, and this is one of his best.

6. Forbidden Planet (1956) - Let's pretend this isn't one of the best sci-fi films of all time. Let's pretend Leslie Nielsen isn't awesome playing it straight or that it doesn't have Robby the Robot or that its widescreen Metrocolor compositions aren't incredible or that it has nothing to do with successfully turning The Tempest into space opera. Forbidden Planet would still be f'ing awesome for one reason: Anne Francis.

7. Michael Clayton (2007) - Every scene is good and interesting. The climax is kind of terrible, but everything else about this movie is f'ing awesome so the movie is still f'ing awesome.

8. Pickup on South Street (1953) - Because Sam Fuller. One of meanest, toughest and baddest movies ever made.

9. Blow Out (1981) - Brian DePalma's best movie, and he's made a lot of awesome movies. John Travolta's best performance, and he's agreed to appear in a lot of movies.

10. Inglourious Basterds (2009) - We got us a German here who wants to die for country. Obliiiige him.
Posted by Patrick Bromley at 6:58 AM