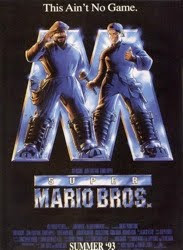 This weekend sees the release of only one major studio film: Resident Evil: Afterlife, the fourth (fourth!) in the series of movies based on the Resident Evil videogame. Because when something is the worst, there should be more of it. That's how come there's Applebee's.

1. Street Fighter (1994) - Not the badass Sonny Chiba movie, but a Jean-Claude Van Damme vehicle based on the video games of the same name. Die Hard screenwriter Steven E. DeSouza "directs" this ugly, stupid imitation of a movie. This was Raul Julia's last film, which is maybe the most embarrassing final credit since Orson Welles bit it after playing the voice of Unicron in Transformers: The Movie. This thing made almost $100 million at the box office, because we're fucked.

3. Super Mario Bros. (1993) - Bob Hoskins IS Mario. John Leguizamo IS Luigi. British and Hispanic makes Italian. This movie has kind of a cult following, because parts of it are sort of dark and imaginative. Don't be fooled, though. It's mostly the worst. Dennis Hopper's portrayal of King Koopa is what ultimately killed him.

4. BloodRayne (2005) - Any of Uwe Boll's "movies" could go on this list, but BloodRayne is especially hilarious thanks to Michael Madsen and Meat Loaf and every single person in this barf. Also, it quickly ended the movie career of Kristanna Loken, which is also very funny.

6. Hitman (2007) - I want to make fun of this movie so badly, but I'm getting bored just thinking about how bored I am. Timothy Olyphant bald tattoo head naked Olga Kurylenko confusing this with Max Payne.

9. Lara Croft: Tomb Raider (2001) - Someone decided to make a Lara Croft movie because they could cast Angelina Jolie as the big boob'd heroine. That was a good idea. It was the only idea anyone had, because this movie is death.

10. Mortal Kombat (1995) - Paul W.S. Anderson has a terrible reputation as a filmmaker, and shit movies like this one (which is about people fighting) are the reason why. Incidentally, he's also responsible for Resident Evil: Afterlife, so the suck has come full circle.
Posted by Patrick Bromley at 6:15 PM