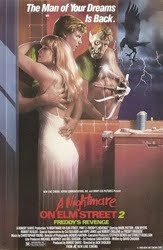 The lifeblood of the horror movie is the sequel, the remake and, now, the "re-imagining" (which makes me re-barf). It's Scary Movie Month, so let's revisit some of horror's most popular and enduring franchises. Because this time it's personal.

Don't forget to participate in the F This Movie! Scary Movie Challenge!

1. Friday the 13th (10 movies + 1 crossover + 1 remake)
High points: The first movie is still kind of a grungy classic. Part 3 is gloriously stupid and has hilarious 3D effects. Part IV has Crispin Glover and Corey Feldman. And I would argue that Jason Goes to Hell is intentionally funny.
Low points: Anything involving going to space, taking Manhattan or versusing Freddy.

2. A Nightmare on Elm Street (7 movies + 1 crossover + 1 remake)
High points: The original, obviously, and there's a lot to like about Dream Warriors and (especially) New Nightmare.
Low points: Everything else. Freddy's Revenge is only worth seeing because it's the gayest movie ever made.

3. Hellraiser (8 movies)
High points: Again, the original movie is grisly and intense, and the second movie is batshit crazy and actually does a good job of recreating Hell.
Low points: The next six direct-to-video sequels, though a movie with the subtitle Deader can't be all bad. It's descriptive, at any rate.

4. The Texas Chainsaw Massacre (4 movies + 1 remake + 1 remake prequel)
High points: The two Tobe Hooper movies are classics, and I actually prefer the sequel to the original.
Low points: Despite the starpower of the franchise -- including Renee Zellweger, Viggo Mortensen and Matthew McConaughey -- the rest of the movies are barf on toast. At least the remake explains that Leatherface wears a mask of human skin because he's insecure about his skin condition. Fuck that movie with a chainsaw.

5. Halloween (8 movies + 1 remake + 1 remake sequel)
High points: John Carpenter's original is the classic template for every slasher movie. Season of the Witch is pretty terrible but fascinating in its insanity. Return of Michael Meyers (Part IV) is an underrated redo of the first film. H20 is better than it has any right to be. Rob Zombie's remake and its sequel don't quite work, but at least try something different and are worth a look. Actually, the Halloween series might have the best batting average of any franchise.
Low points: If not for Curse of Michael Meyers, about Druids, and Resurrection, which is worse than cancer.

6. Phantasm (4 movies)
High points: The Phantasm films have the distinct advantage of all being helmed by the same guy, series creator Don Coscarelli. That means that even though they're not all good -- and they're not -- at least they all exist in the same universe and attempt to tell one long, unfolding story instead of just being a bunch of rehashes.
Low points: A lot of what works about any of the Phantasm movies -- dreamlike imagery, bizarre pacing, Reggie -- is also the stuff that works against them. None of them are terrible, but there's not a great film among them, either.

7. The Living Dead Series (6 movies + 4 remakes + 1 spin-off + 4 spin-off sequels)
The first three Romero films, Return of the Living Dead and the Dawn of the Dead remake.
Low points: Everything else. Romero is the George Lucas of horror, directing a trilogy of films that are held in the highest esteem and creating a template for an entire genre, then making a second trilogy in the same series (years later, too) that makes us wonder how the fuck they were made by the same guy.

8. The Howling (7 movies)
High points: The Joe Dante one.
Low points: Anything not directed by Joe Dante.

9. Saw (7 movies)
High points: The first movie is a watershed horror movie for the 2000s, like it or hate it. Saw III is where the series started to get interesting because it's actually about something; same goes for Saw VI. This is a series that gets more interesting the longer it goes on.
Low points: Saw II and Saw IV are particularly mean-spirited and, worse yet, dull.

11. Alien (4 movies)
High points: Forget what I said about Halloween; the Alien series actually has the best batting average. Each film takes a new approach to the material, from the slow-burn monster-movie dread of Ridley Scott's original to the combat hell of James Cameron's follow-up to whatever the hell Alien: Resurrection is, and every movie in the series is at least directed by a genuine artist with a vision.
Low points: Even the movies that don't work -- Alien3 and Resurrection -- are interesting and not total failures. They're low points in comparison to the impossibly high standards of the first two films, but I wouldn't suggest that either is a bad movie. Except Resurrection, which is kind of a bad movie.

12. Children of the Corn (7 movies + 1 remake)
High points: There aren't any. This series began as shit and somehow only got worse.
Low points: Any of them that have the words "children" or "corn" in the title.

13. Child's Play (5 movies)
High points: The first movie is incredibly entertaining and well-done, given the ridiculous premise, and the series found new life when it embraced its campy side (Bride and Seed of Chucky).
Low points: Child's Play 2 and Child's Play 3.
Posted by Patrick Bromley at 9:26 AM