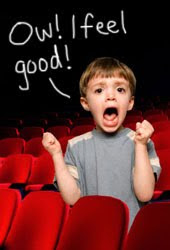 How 'bout that Super Bowl? Super Boring commercials, amIright? Well, soak it up, football fans, because it looks like there might be a player's strike next year. And THEN who are you gonna watch? Shane Falco? The answer is yes -- we will be watching Shane Falco. "Pain heals. Chicks dig scars. Glory lasts forever."

This is the second trailer for Super 8, which is directed by J.J. Abrams and produced by Señor Spielbergo. The first "teaser" trailer, here, is actually longer, but shows less of the movie. I first saw this during the Super Bowl, and, for a brief moment, it made me forget about how much I hate the Packers. Close Encounters of the Third Kind meets X-Men meets Paul (#pauljoke)?

I'm not even going to bother with any commentary about this movie, because Patrick already did it ... and BETTER. Click here to read his unique take on this trailer. And while you're at it, subscribe to his About.com Comedians newsletter! You're welcome.

Can Kevin Smith just retire already? I'm not saying that this movie doesn't look good (it doesn't), or that Kevin Smith doesn't still have talent (he doesn't), I'm just annoyed by the fact that the March 8 Chicago premiere of this movie costs $77.50 for the CHEAPEST ticket. Also, weed, tweets, hockey and jorts.
Posted by Patrick Bromley at 4:17 PM