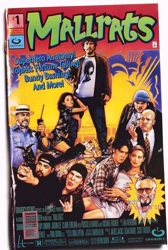 Did you guys see Moon? That movie was awesome, and made even more awesome by virtue of the fact that it was director Duncan Jones' first film. We can all be more than just David Bowie's son if we put our minds to it. His second movie, Source Code, opens this week, and we're all hoping it's not a drastic step backwards. After all, no Sam Rockwell. Let's F some past second movies that were disappointing.


1. Mallrats (1995) - Kevin Smith experienced one of the biggest sophomore slumps of the last 20 years after becoming a critical darling with his debut film, Clerks, and then alienating all but the late-night cable crowd with this second feature, which failed to make back even its $6 million budget. The movie is still reasonably funny (because Jason Lee) and entertaining enough, but lacks the low-budget charm and humanity of Clerks and Chasing Amy, Smith's next film. A number of Kevin Smith fanboys will tell you this is their favorite of his movies, but those people are wrong.

2. Poetic Justice (1993) - John Singleton exploded onto the scene in 1991 with Boyz n' the Hood, which was pretty great. It's not really anymore, because time marches on. His second film was a pretentious romance in which Janet Jackson's braids played a character named "Justice" who wrote poetry. DO YOU GET IT? Singleton has spent the rest of his career proving that Boyz was pretty much a fluke. We got a problem here.

3. The Postman (1997) - Kevin Costner won a lot of of Oscars for his first film, Dances With Wolves (because GoodFellas), so naturally his second movie was a three-hour post-apocalyptic western which he directed, produced, starred in (as a postman who doubles as a Christ figure) and even sang over the end credits. It was a duet with Amy Grant, because K. Cost isn't one to hog all the glory.

5. The Last Movie (1971) - This is the movie you make when it's 1971 and everyone heaped praise all over your first movie, which was Easy Rider. Also when you devote your life to drugs and alcohol. This movie is what killed Dennis Hopper.

6. Crimewave (1985) - On paper, you would think Crimewave couldn't fail. Sam Raimi directs (coming off Evil Dead) with a script by Joel and Ethan Coen. The movie was taken away from Raimi by the studio, though, who wouldn't allow him to cast his lead of choice (Bruce Campbell) and made the experience a nightmare. Raimi has pretty much disowned the movie, which is now more a curiosity than anything else.

7. The Brown Bunny (2003) - Buffalo '66 was awesome, so it made sense that for his follow-up, Vincent Gallo would want to spunk in our mouths. Literally.

8. Dead Silence (2007) - James Wan made a big name for himself with the success of Saw in 2004, and while I would love to give him credit for doing something different with his next movie, I can't because his next movie was Dead Silence. Just because you're trying to make a ghost story about puppets doesn't mean you're not making a terrible ghost story about puppets, James Wan.

9. Stop-Loss (2008) -It took Kimberly Pierce almost a decade to make a film after breaking out with Boys Don't Cry (it's taken me even longer to get over the emotional devastation that movie caused, because the Bluest Eyes in Texas Are Haunting Me Tonight). There's a lot to admire in Stop-Loss, but noble efforts do not a good movie make.

10. Southland Tales (2007) - Even the people that loved Donnie Darko (and there are many of them, and several of them are the worst) hated and rejected Richard Kelly's second movie, Southland Tales. I get that, but can't really speak to it because I think it's great. It just goes to show you that one person's Southland Tales is another person's Southanld Tales.
Posted by Patrick Bromley at 7:36 AM