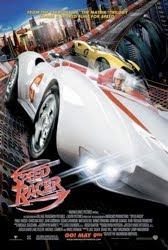 Welcome to Take Two, a new feature on F This Movie! (because F This Movie! needs more recurring features) in which we revisit movies that we didn't really like (or get, but mostly like) the first time around to see if our feelings about them have changed. The future is now!

I tend to think that almost any movie can improve on a second viewing, mostly because you're finally able to see it for the movie that it actually is and not the one you were thinking it would be. It's no longer being compared to your expectations, and instead can actually be taken on its own terms. Maybe it's some amount of familiarity with the movie that makes us more forgiving the second time around. Maybe it's just dashed hopes -- expecting to dislike a movie the second time can make it easier to suddenly feel like it's not so bad.

It took me a while to see Speed Racer back in the summer of 2008, a) because I have no affection for the cartoon and b) because everything I saw about the movie made me think it would make me feel old and nervous. Several weeks into its release and with a dearth of other new releases to choose from, my wife and I finally decided to check the movie out on a Friday night. We were both bored almost immediately; more than that, though, the audience full of 10-year old kids was completely bored, too. It's hard to bore kids at the movies (as evidenced by the success of stuff like Rio and Hop), but the three-quarters full audience for Speed Racer quickly grew restless and rejected what it had to offer -- they were talking, running up and down the aisles, finding anything to do but watch the movie. It was somewhat remarkable to see a movie that loud and colorful and busy still manage to bore the shit out of a bunch of kids.

The boredom is all that I remembered about Speed Racer, so it was tough to muster up any excitement about revisiting the movie. Making things more difficult is the fact that the movie is every bit as boring as I remembered for at least its first hour. The first fifteen minutes of the movie are an assault on the senses, in which a hyper-stylized race is intercut with a load of dull exposition explaining how Speed Racer arrived at this point. Trouble is, we have no idea who Speed Racer is and no way of caring about him -- though that never phases the Wachowskis, who apparently just decided that since he's based on a cartoon character, he doesn't need to have a single character trait other than that he likes to drive cars fast.

And therein lies the problem at the center of Speed Racer. The Wachowskis put all their time and energy into how they were going to tell the story and never stopped to notice that they didn't have a story worth telling.

Speed Racer's main villain is, of course, a greedy corporation called Royalton Industries, headed by E.P. Arnold Royalton (Roger Allam, doing a poor man's Tim Curry).That's the big conflict of the movie -- will Speed or won't Speed sign up for corporate sponsorship. Seriously? What is it with these $100 million dollar blockbusters obsessed with coprorate culture? The Phantom Menace takes a lot of shit (much of it from F This Movie!, as heard on our Phantom Menace podcast) for jettisoning ideas like good and evil in favor of trade embargos and federation power grabs. I get that Speed Racer only had a cult cartoon behind it and not what is arguably the most beloved film franchise in history -- the stakes were much lower -- but you didn't hear anyone complaining about the stupid, capitalistic plot of Speed Racer. There are probably some people who would say that Speed Racer is actually about capitalism. It isn't.

And what's with all these cartoon movies making corporations the villain? Speed Racer. Yogi Bear. The Flintstones. Alvin and the Chipmunks (see also: The Squeakuel). Josie and the Pussycats. I guess in the absence of a recognizable villain, the "writers" of these movies have to invent one; what better than a faceless, evil conglomerate?

The movie that Speed Racer reminds me of in a lot of ways is Kerry Conran's Sky Captain and the World of Tomorrow. Seeing the trailers and marketing for both, it seemed (at the time) like this was some sort of giant leap forward -- it would be the future of cinema. Then the movies came out and proved to be the future of nothing at all. Instead, they're mildly interesting one-offs -- experiments in style and technique that we might some day point to and say "Oh, this bad movie was doing this one thing years before it became pretty common."

In fact, there's already been a movie that did what Speed Racer was trying to do, only with success: Edgar Wright's Scott Pilgrim vs. the World (which F This Movie! also did a podcast on; you can hear it here). Wright incorporated the language of cartoons, comic books, video games and anime in a masterpiece that still tells a story and features three dimensional characters. Even the style of the film feels organic and logical in Scott Pilgrim: we're seeing the world as Scott has constructed it. He defines himself by pop culture and has made himself the star of his own movie/sitcom/video game/pop art, and the style of the movie reflects that. With Speed Racer, you get the sense that the Wachowskis just wanted to make a live action movie that was as much like other media as it could be. It's like when The Flintstones came out. It was obvious that great pains were taken to make a live action film that was just like an episode of the cartoon. What's the appeal of that? If I want to watch The Flintstones, I'll watch The Flintstones. The movie is just some sort of unnecessary middle man.

Speed Racer is obviously much more ambitious than something like The Flintstones, and there are some sequences that actually come close to working. About halfway through the film, there's an extended race sequence that takes on a life of its own -- even if, once again, there are literally no stakes. We don't know what happens if Speed's team (which includes Matthew Fox as Racer X, because cool characters are way more cool when they're super white and boring) wins or loses the race. Like the rest of the film, we don't really know what's on the line -- it fails as drama. Still, there's some neat CGI driving. If that's all we're looking for, let's just hand the Statue of Liberty over to the giant monkeys now. We're fucked.

Is it worth talking about the actors? Not really. Speed Racer is a movie that was in development forever, with guys like Johnny Depp, Vince Vaughn (?) and Keanu Reeves circling roles at one time or another. When it finally got made in 2008, it starred Emile Hirsch and Matthew Fox. Kind of a step down. I would bag on Emile Hirsch's performance, except there's nothing wrong with it. He does a fine job playing a cartoon, I guess, in that he's boring and isn't given a part to play. John Goodman is effectively larger than life as Speed's dad, and both Christina Ricci and Susan Sarandon appear to have been cast on the basis of their gigantic eyes -- they look like anime characters (if nothing else, the movie serves as a reminder of just how great-looking Susan Sarandon is). The kid that plays Speed's younger brother (Paulie Litt) is annoying, but that's how he's been written. He runs around the movie mugging with a monkey and providing comic relief, which I'm sure is faithful to the cartoon. I would like to once again remind Hollywood that faithfulness to a cartoon -- or any source, for that matter -- does not a good movie make.

Ultimately, a second viewing of Speed Racer didn't really change my mind about the movie. It's still overly concerned with style and not with story. It's still boring. And, as someone who doesn't play video games or watch anime, it still tries its hardest to make me feel old. It might have succeeded, too, if its intentions weren't so transparent. Its wildly colorful and hyperactive and fast and loud and completely hollow. It's like a kid standing in front of you, waving his arms and screaming for over two hours; when you finally relent and give him your attention, he's got fuck all to say.
Posted by Patrick Bromley at 11:19 PM