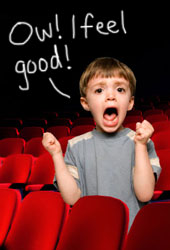 "Have mercy! / How rude! / You got it, dude! / You're in big trouble, mister! / My name is Harvey Milk, and I'm here to recruit you!" -Doug, after his weekend in San Francisco in which he went on the Full House tour, probably.

If Patrick and I had a nickel for every time we peed in a fountain, and then lightening struck, and then a creepy statue granted our wish to swap bodies so we could bone each other's wives ... well, let's just say that we could probably afford to purchase the domain name "fthismovie.com" (which we can't, because [DUR!], we don't HAVE that many NICKELS!). Also -- full disclosure -- Patrick and I have NEVER shared a good long pee together. Guy wouldn't even change his clothes in front of me in gym class. BEST FRIENDS 4EVA! My only question: when did Ryan Reynolds become Ryan Mannequinface? #becarefulwhatyouwishfor!

This movie looks beautiful (like, The Tree of Life beautiful), but also, you know ... DING-DONG CRAZY! I guess those two things (crazy and beautiful) aren't mutually exclusive. "You're SO obvious, Lars von Trier!" I did it! A Crazy/Beautiful joke in 2011! What are we talking about? Oh, right -- Melancholia. I suppose any movie about the end of the world (read: the earth is blown to smithereens after colliding with another planet [I hope that's not a spoiler, as even the director has admitted as much -- the movie starts at the end]) can't really be judged on a strict sane/insane metric. I'm looking forward to this! Quick side note (which is all this paragraph is, apparently): Dogville is one of my wife's favorite movies, which I cannot, for the life of me, explain. Think it has something to do with her love of cat-faced actresses.