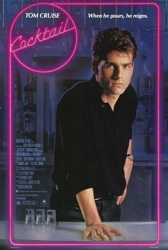 We at F This Movie! are known netwide (that's internet-wide, which I assure you is a thing) for having impeccable, unassailably cool taste. Even the best among us are not infallible, though, and today's list is proof of that.

1. Erika: Cocktail (1988) - 1) Tom Cruise, circa 1988. 2) Waterfall scene. 3) Coughlin's Law. 4) "If Jordan gives birth to a fine Irish son / There will be Cocktails and Dreams for him one day to run / A business that will yield the financial windfall / To be franchised in every suburban shopping mall. / If a daughter arrives to bless our clan / I guess the shit will finally hit the fan / But this I shall promise thee / I'll never let her marry a guy like me. / Still if our child is the naughtiest of girls or the wildest of young men / I swear I'll be the best dad I can / And never ever get spooked again." 5) I saw this movie as a kid, and while I recognize as an adult that it is not a good movie, the 11-year old me still wants Tom Cruise to rescue me from my mean, rich dad, give me twins and a bar in a shopping mall.

When this was first released, it opened on the Friday that my son finished fourth grade. I had just completed my 15th year of teaching. We were not in the mood for anything weighty or substantive or thought-provoking. We were in the mood for stupid fun.

This film fit that bill. The plot is pure simplicity: “Nicholas Cage has to steal a whole mess o’ cars.”  Okay. Got it. That is it! That is all any audience needs to know! We sat, stupid and happy for 118 minutes, and watched Nicholas Cage steal a succession of cars. I do not know if I have ever had more fun in a movie. Angelina Jolie shows up as eye candy. Robert Duvall shows up to lend the movie some Academy Award caliber gravitas.

Maybe it was spending time with my son. Maybe it was relief that the school year was over and summer vacation had officially begun.

Holy Cats. I love the shit out of Gone in 60 Seconds. 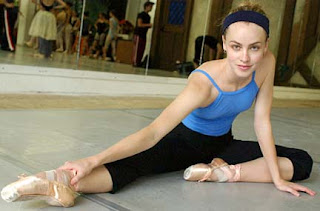 4. Mike: Rocky V (1990) - This movie is terrible. While I give Stallone some credit for getting the series back on track as far as the character's journey is concerned (sorry folks, but Rocky IV really doesn't fit in the series), it's all kinds of awful. Stallone continues to act like someone doing a Rocky impression, while Talia Shire and Burt Young repeat their performances movie to movie. Sage Stallone isn't bad and Tommy Morrison is as good as can be expected. Richard Gant gives a predictable performance as the Don King-like George Washington Duke. Everything about the movie is lazy, uninspired and simply boring. That's why I've seen it only about 10 times.

5. Erich: Superman III (1983) - I'm sure nostalgia is wreaking havoc on everyone's picks, but here is a movie my kid self saw with a regularity I only wish I could blame on shoddy parenting. Superman III isn't the best depiction of the Man of Steel OR Richard Pryor, but it inspired the fraction-of-a-penny embezzlement scheme in Office Space and taught me the phrase "apres ski." According to Wikipedia, Robert Vaughn plays the bad guy and a major plot point hinges on him trying to control the world's coffee supply. I haven't seen the movie in fifteen years, so I'll take the Internet's word for it. All I know is that Superman turns evil, smashes a bar mirror with peanuts, and causes a huge oil spill. Go '80s!

6. Alex: The Beach (2000) - I'm not ashamed of much, least of all my taste in movies. But whenever this aesthetically pleasing dreck comes up in conversation (which is surprisingly often, in my circles anyway), I am pretty sheepish about raising my hand to lobby on its behalf. We talk so often on the podcasts about the "ambitious mess," and I can think of no more appropriate term for The Beach. An overstuffed and constipated take on Lord of the Flies for the ADD set, the movie tries to say so much about youth, innocence, class, drug running, French chicks and banging Tilda Swinton. Does it all work? Not even close! That's why it's on the list. But given that The Beach was given to us by a talented director, Danny Boyle, teamed with a talented cast with excellent source material (seriously, it's a great book), I'll probably re-watch this movie for the rest of my life to figure out what went wrong, whether DiCaprio is really drinking rattlesnake blood in the first act and whatever happened to Virginie Ledoyen.

7. Mark Ahn: The Chronicles of Riddick (2004) - Pitch Black worked as a version of the sci-fi/horror thriller, with enough unique perks (seeing in the dark, duh) and tension to keep the story interesting and moving forward. Chronicles throws out all of what worked in Pitch Black and tells us that Riddick is not just a petty thief/homicidal maniac, but a civilization-saving Messiah. The plot is messy and over-elaborate, but I still like the places where Riddick solves his way out of trouble, and the characters is best in a cold-blooded fury dispatching bad guys. I still like the lived-in feel of the universe, filled with elementals and Necromongers and Furians and prison planets; it's still a pretty picture to look at. The flaws are obvious, but whenever Chronicles is running on TV, I end up taking at least 15 minutes to watch whatever part is on.

8. Patrick: Meet Joe Black (1998) -  There isn't a criticism you could level towards Meet Joe Black that I wouldn't agree with: bloated overlength. Glacial pace. Brad Pitt's wooden, almost alien performance. Artificial sense of weight and importance. Subplots about corporate takeovers. Endless speechifying. On-the-nose musical score (that one I might disagree with). Six different endings. Incorrect assumption on the part of Martin Brest that America was dying for a three-hour remake of Death Takes a Holiday. All of these things may be correct, but damn if I'm not reduced to tears every single time I see it. It's like I'm two people watching Meet Joe Black -- the guy who sees all its flaws and knows better, and the guy who doesn't care because this movie works.

Posted by Patrick Bromley at 10:28 AM