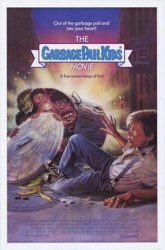 Who is this movie for? Seriously. Is it you? If it's you, please say so.

As a child of the '80s, I -- along with most of my friends -- "collected" Garbage Pail Kids (GPK) cards, which is to say I had about two dozen of them one summer.

And, yes, I did own the "Doug" card -- Doug Plug, a cartoon of a dog peeing on a fire hydrant-shaped Doug. It was one of my most cherished possessions for part of one afternoon. 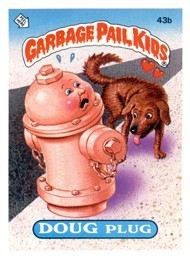 While never HILARIOUS, the cards were clever enough to keep me amused (in the derivative vein of Mad magazine), and just gross enough to nonplus most authority figures; namely, teachers (my parents, on the other hand, couldn't care less about these stupid, innocuous cards). Don't believe me? Here are two archival newspaper clippings decrying the impact these cards had impressionable children. Reagan's America!

Today, we consider GPK cards tame. Quaint, even -- a pop culture relic from 25 years ago. Honestly, I'm more offended these days by Bratz dolls than I am by vulgar caricatures of Cabbage Patch Kids.

I didn't see The Garbage Pail Kids Movie when it first came out in 1987. In fact, I've never seen the movie (before this past Sunday, that is). It was completely off my radar. And now I know why.

It is the WORST. And not in a good way.

Unlike Troll 2 (the legit "Best Worst Movie"), there's nothing redeeming about The Garbage Pail Kids Movie -- it is ugly and slow and uninteresting. And the acting, while BETTER (these are relative terms) than Troll 2, only serves to further drag the movie down. I can't even enjoy it on an ironic level -- the acting is too good (which is to say, not great, but not horrible) to laugh at, which would have at least given me something to do for 96 minutes.

Before the movie started, I had no idea what it was going to be about. Would it take place in a self-contained GPK universe? A fish-out-of-water story? Horror (the creature design certainly seems to imply as much)? A coming-of-age tale of three adolescent boys on a late-summer journey to see a dead body in the woods, only to discover that GARBAGE PAIL KIDS were the murderers? 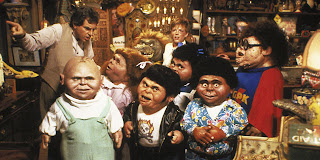 So ... this movie is an allegory for child slave labor and the fashion industry, right?

Probably not. That's too much to expect from a movie produced by Atlantic Releasing Corporation and fucking TOPPS CHEWING GUM. Still waiting for their live-action Bazooka Joe joint ...

A few random notes I jotted down during the movie: 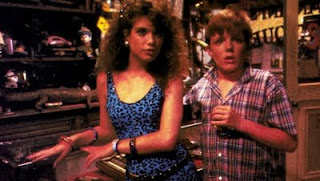 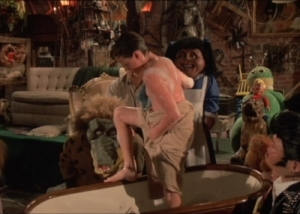 Aaand ... this is about the time I zoned out. The last half hour of the movie consists of a fashion show, a big fight sequence, a "prison" break and rough bikers coming to the aid of the GPKs. All of this SOUNDS interesting, right? You would be wrong. I couldn't stop looking at my phone, wondering when this thing was going to end. It needs to be 30 minutes shorter JUST TO BE WATCHABLE. 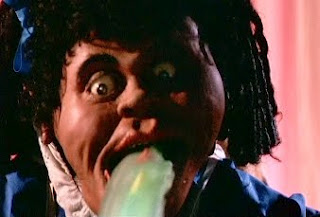 In case you're not convinced that The Garbage Pail Kids Movie is reprehensible, here is a list of crimes committed by eponymous stars:
Breaking and entering
Causing a disturbance
Grand theft auto
Destruction of property (both public and private)
Vandalism
Theft
Assault
Underage(?) drinking
Public intoxication
Drunk driving
Cannibalism (assuming Ali Gator is "human")?
Public urination
Farting in the face of innocents

I don't know what changes could've saved The Garbage Pail Kids Movie. Trust me: every idea you and I have would make the end product immeasurably better than this wet fart of a film. HOWEVER, I argue that it never should've been made in the first place. The world doesn't need this!

"Rats and thunder, wind and hail / Send the kids back in the pail!"

In the comment section, please continue to give us suggestions for future installments of "I'll Watch Anything." Thanks!
Posted by Patrick Bromley at 7:16 AM