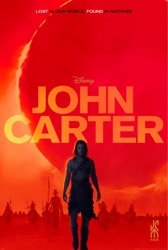 Going to the movies is like watching a magic show. We agree to suspend our disbelief for a couple of hours, and in return we expect to see something amazing. Whether that something is a levitating handkerchief or a full-scale alien invasion, we don't care that it isn't real as long as the performer keeps us enthralled. Unfortunately, this delicate spell is easily broken. Ask anyone who has ever been stuck near a group of rowdy teenagers in a crowded theater, or so far to the left of the stage that they can see the magician's secret pocket. Poof! A willing entrant to the land of magical wonders has been transformed into a grumpy non-believer, wondering if it's possible to get his money back.

There's nothing like falling under a movie's spell. John Carter cast that spell on a lot of people. Despite mixed reviews and disappointing box office returns, a strong word-of-mouth campaign has sprung up to defend director Andrew Stanton's adaptation of Edgar Rice Burroughs's story A Princess on Mars. I hope Disney appreciates this grassroots campaign, because so far it's been more successful their own multi-million dollar ad blitz. I was excited to see the film, not just because I like Stanton's first two movies, Finding Nemo and WALL*E, but also because there's nothing more exciting than finding treasure in someone else's trash pile.

The movie begins on Mars -- or as its inhabitants call it, "Barsoom" -- with a voiceover that introduces us to two warring Martian factions: the power-hungry Zodangans and the scrappy Heliums. Forget little green men (for now, at least). These Martians are big, shirtless white guys, hefting swords and flying insectoid air ships. The only real difference is that the Helium folks wear red capes while the warriors of Zodanga wear blue. Oh, and the leader of the blue guys, the villainous Sab Than (Dominic West), has been given a magic death ray by the Therns, a group of bald shape-shifters who interfere in interplanetary events for their own amusement.

We meet John Carter (Taylor Kitsch) in 1881 New York City, dodging a sinister-looking stranger on the way to send a telegram to his nephew, Edgar Rice Burroughs, urging him to come quickly. Carter is gone when Edgar arrives, but he has left behind a journal that tells the story of his journey from Army man to treasure hunter to interplanetary explorer who spends most of his time on Mars...er...Barsoom, trying to find a way home.

On Barsoom, Carter can jump high and far, the result of lower gravity and high bone density. This ability fascinates the first creatures he meets, a race of green, four-armed warriors called Tharks. Their leader, Tars Tarkas (voiced by Willem Defoe), takes a shining to Carter and adopts him as a pet. Eventually, Carter encounters the human Barsoomians, saving Helium princess Dejah Thoris (Lynn Collins) from Zondangan attack. Thoris is running away from her father, who has agreed to marry her off to Sab Than in exchange for peace. Following in the footsteps of any number of romantic comedies, Carter and the princess go from hating each other to falling in love, for reasons that have more to do with both of them being attractive humans than any tangible emotional connection. After all, who else is Carter going to fall for, a Thark? All the while, we're shown how much John Carter misses his dead wife, first with a lingering close-up of his wedding ring, and later with a scene that cuts back and forth between Carter on Mars and a flashback to Earth. Carter and Dejah Thoris discuss their feelings for each other, his desire to go home, and her desire that he save her people in a series of awkward and overlong conversations that include lines like "it feels like I have always known you" and "a man may change his metal, but he cannot change his heart."

Dialogue is a big problem in John Carter, which is surprising since the screenplay is partially credited to Pulitzer Prize winner Michael Chabon. I can only assume the cheesiest lines were added in haste to replace ones Chabon had written about 1940s superheroes punching Hitler in the mouth. The biggest issue with the dialogue is that there's so much of it. Climactic action scenes like the ape-on-Carter-action shown on the movie poster feel oddly truncated, and yet there's plenty of time for people to prattle on, trying (and mostly failing) to explain Barsoom's complex sociopolitical landscape. Having never read the source material, I imagine the tongue-twisting names and dense mythology can be blamed on Burroughs, but it doesn't excuse Stanton from forcing the audience to spend a good chunk of the movie trying to figure it all out for themselves.

Even more confusing, the two warring factions look the same: buff gladiator-types with swirling red tattoos, incomprehensible names, and nearly identical airships. It's not too bad when everyone is standing around, but when the fighting starts they become a mass of flashing swords and bulging biceps. It begs the bigger question: why is Mars populated by human gladiators in the first place? Why, given the film's massive budget, does it feel like they skipped the design process in favor of making the cheapest costumes possible? The film takes place on Mars. The director has the best CGI animators in the business on speed dial. Why are the Tharks the only otherworldly beings on this other world?

The similarities between the Red and Blue Barsoomians make more sense in the context of the Mars civil war at the center of Burroughs' stories, a war that mirrors the one John Carter has just finished fighting on Earth. Unfortunately, the film glosses over that meaty bit of symmetry, sidelining what could have been the thematic core of the film. Instead of a story about brother fighting against brother, it's the story of a guy who can jump really high and his favorite she-Martian. John Carter is a frustrating film because it misses so many opportunities. The inventive aspects of the film get lost among science fiction cliches. For all I know, Burroughs invented those cliches. It doesn't matter. Stanton never finds a balance between mythology and action, never gives us a reason to care about the characters. The film swings between overstuffed set-pieces and scenes that just feel empty. For every cool Martian ruin and exotic CGI creature, there's someone wearing a generic tunic, swinging a generic sword, in a generic desert that looks as much like Arizona as it does the Red Planet.

I wish I could write a glowing review of John Carter. I'd love to stick it to film snobs and join the film's champions in their Martian paradise, but I can't. Although it's not bad enough to deserve the "Ishtar on Mars" label some critics have thrown around, I doubt anyone but the biggest fans will care about the film by year's end. If Carter resonates with you, by all means tell people to go see it. You were dazzled by the magician, and there's nothing more wonderful than that. I envy you. Me, I'm thinking about how to get my money back.
Posted by Patrick Bromley at 6:49 AM