Sh!#ting on the Classics: Dances with Wolves Dances With Wolves is a magnificent 90-minute film. Unfortunately, the original theatrical release ran close to three hours. Even that film is hard to find among the bloat and aimlessness of the close-to-four-hour-long Extended Version.

I remember not particularly liking Dances With Wolves when it was first released. I thought it was boring. Nothing prepared me for the Extended Version, though, which adds almost an hour of footage to the original, overlong film. It reminded me of the time my wife and I sat down to watch Ray on DVD. The disc gave us a choice between the “Theatrical Version” or the “Extended Director’s Cut.” We foolishly chose the latter. Day turned to night. We were four hours in, and Ray Charles wasn’t even blind yet!

Dances With Wolves is too damn long.

“Shut the fuck up,” is my Algonquin Round Table-like riposte.

THE PLOT IN BRIEF: At the end of the Civil War, Lt. John Dunbar (Kevin Costner) stages a heroic/foolhardy stunt that somehow wins the battle for the Union soldiers. A grateful general offers him any post he cares to name. Dunbar wishes to see “the frontier” before “it is gone.” Arriving at Fort Sedgewick, he finds it deserted. He spends his days keeping a journal, tidying up, and befriending a wild wolf. Gradually, he discovers Sioux Indians living nearby. He gradually befriends them and gradually becomes a part of their tribe. His bond with medicine man “Kicking Bird” grows particularly strong, gradually. Slowly-paced adventures ensue. Eventually, the Army catches up to him and all hell breaks loose. 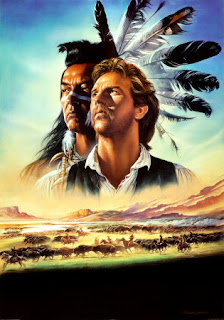 Dances With Wolves is very earnest, and while I do not think that its earnestness should be held against it, this is the quality that begins to grate on one’s nerves. Dances With Wolves is the annoying religious cultist in the airport who simply won’t take “no” for an answer when he hands you one of his crazy brochures. Then he wants to go on and on and tell you all about his miraculous conversion…

Speaking of religious indoctrination, this film is the first installment of the Kevin Costner “I Humbly Suggest to You That I Am Jesus” trilogy, the other two films being Waterworld and The Postman. (You remember the broad outline: Jesus Christner, a long-haired, bearded outsider with soulful eyes and a great butt, brings enlightenment and salvation to a doomed but grateful people. He gets the shit kicked out of him for his efforts. Amen.)

During this Costnerian Epoch I half expected him to make it a quartet by writing, producing, directing and starring in SoCal Christ, a musical that is 16 ½ hours long, not including its five intermissions.

Pauline Kael wrote a vicious pan of Dances With Wolves. The New Yorker wound up apologizing for her review in a prepared letter it mailed out to the hundreds of readers who complained about it. Her review has become sort of legendary; the line most often quoted is “Kevin Costner has feathers in his hair and feathers in his head.”

Like a sixth grade research paper, this film’s simplicity and sincerity and naivete are stunning. Almost every white man depicted is crude, bloodthirsty, and grotesque. In contrast, the film presents the popular trope of the Noble Savage, close to the earth and all that. Until they do something crude, bloodthirsty, and grotesque… so Kevin Costner is left as the only character that is ALL GOOD. He alone is the Man of Conscience. He alone knows that killing is bad UNLESS HE IS THE ONE DOING IT. Then he tells the other Indians that it “felt right to kill.” This is one confused sermon.

I believe Costner was sincere in his efforts to bring this story to the screen; but like a breathless child, he tries to say so much that he winds up saying nothing. One of the peculiar ironies of art is that, often, “bigness” is in “smallness.” Costner is clearly awed by the American West. So he throws the whole of it at us over and over and over again -- not realizing that smaller, more keenly observed details would better serve his purpose.

Dances With Wolves was praised for its cinematography, but it is picturesque for no clear purpose. When John Ford shows the audience the grandeur of Monument Valley in his films, there is always a dramatic purpose to the shot and composition beyond mere picture postcard prettiness. Costner the director is also in love with “figures on the horizon silhouetted against the sky.” You could edit this movie down to two hours if you just removed all the pointless and redundant shots of characters silhouetted against the sky. The film also features more zoom shots (specifically zoom outs) than any major studio film I have ever seen. Perhaps because this was his first time directing, Costner (like a suburban father videotaping his son’s ballgame) could not keep his hands off the goddamn zoom lens.

FULL DISCLOSURE: The famous buffalo hunt sequence is properly awe-inspiring and exciting; it is exactly five minutes long. Just think: this single, exciting sequence sure would have a bigger impact in a shorter film.

My wife suggested that the film’s broad story outline almost seems like a twisted version of Heart of Darkness, but because Costner is a megalomaniac, he gets to play both Marlowe and Kurtz! And Jesus.

MASSIVE TANGENT: I had many jokes here that my wife, who actually does have some American Indian ancestry (tribal name: “Eyes Roll to Ceiling”) deemed politically incorrect. I am not allowed, for instance, to make fun of Kicking Bird’s hairstyle: a mad mix of a party centerpiece, a pineapple, and a volcano. It is very distracting; more so because Grahame Greene, who plays Kicking Bird, gives the best performance in the film. But after seeing this film, with its characters names like “Stands With Fist” and “Wind In His Hair” and “Two Dogs Fucking” (okay, maybe with that last one I’m thinking of something else) I feel like making up fun names for everyone!

Patrick can be “Chief Too Funny For The Room.” Call me “Undiagnosed Anxiety Disorder.” Doug, of course, is Pudding Pants.

Sitting through this interminable film and writing this interminable column has led me to one conclusion: this is the best film on which I have ever shit. But any first-year film student could spend some quality time with a DVD copy of Dances With Wolves, Handbrake (a computer program I am convinced is secretly illegal—ask for it by name!), and Final Cut Pro and produce a shorter, better version of this film. Less sky, more wolves!

THE PUNCHLINE: Dances With Wolves won Best Picture, Best Director, Best Adapted Screenplay, and Best Editing at the 1990 Academy Awards – you remember, the year Goodfellas was nominated in every one of those categories too!

BETTER YET: Readers in the Chicago area who yearn to see a good Western will get their chance tomorrow night (3/28) as the Northwest Chicago Film Society presents Man of the West (1958, Anthony Mann) at the fabulous Portage Theater, 4050 N. Milwaukee.  Showtime is 7:30 pm and admission is only $5.00.
Posted by Patrick Bromley at 8:24 AM

Email ThisBlogThis!Share to TwitterShare to FacebookShare to Pinterest
Labels: dances with wolves, kevin costner, oscar winners, shitting on the classics