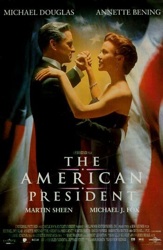 When I discovered that Patrick intended to make I’ll Watch Anything a (semi) regular feature here, I was, quite frankly, shocked. One thing Patrick and I agree on is how obnoxiously some people will insist you watch their favorite movie, especially once it becomes clear in the workplace or family that you are the MOVIE GUY. I have been teaching Film Studies in a public high school for almost thirty years, so imagine how many times well-meaning (pain-in-the-ass) colleagues have brought me their copy of Boondock Saints or Requiem for a Dream and INSIST THAT I WATCH IT. Similarly, students just starting out on their personal “movie journeys” are always asking me if I have ever seen A Clockwork Orange or Evil Dead 2 or Fight Club or Eraserhead, as if they are the only ones who have ever heard of these movies.

Patrick and I once admitted to each other that we would often take the goddamned DVD, just to get the person off our backs, keep it for a few days, and return it unwatched, with a knowing nod and a declaration of “Interesting!”

So Patrick has suggested that I watch Rob Reiner and Aaron Sorkin’s 1995 film, The American President. This I have done. What did I think of it?

The plot of The American President, for the three of you who have not seen it yet, concerns recently widowed President Andrew Shephard (Michael Douglas). When he meets-cute with lobbyist Sydney Wade (Annette Bening), he decides to start dating again. His underlings are mostly against this; they beg him to think of his upcoming reelection campaign. His political opponent Senator Bob Rumson (Richard Dreyfuss) makes political hay of the courtship. Shephard’s approval ratings fall. Shephard makes a big speech on TV and solves everything. That is pretty much it.

I have never been a parishioner at the church of Aaron Sorkin, and I found his screenplay for The American President to be just another Aaron Sorkin Papal Bull(shit.) You know the setup: crowded offices full of literate people spouting aphorisms a mile a minute, a sweaty liberalism that mostly goes unquestioned, the inevitable presence of a Sorkin manqué talking even faster and smarter than everyone around him, a certain humorless earnestness that permeates every scene, and the entire narrative leading up to one big moment of speechifying.

We have seen this before and we will see this again. From Sports Night to The West Wing, from Studio 60 on the Sunset Strip* to, I am guessing, Sorkin’s upcoming HBO show Newsroom. Even his scripts for A Few Good Men and The Social Network suffer from these signature tropes. In The Social Network, Sorkin finally figured out how to goose his frequently weak narratives: make the protagonist and the antagonist the same character. It yields Shakespearian tragedy, and that character gets to do TWICE the speechifying. Bonus!

Sorkin won an Oscar for The Social Network and deservedly so.

I thought Michael Douglas was great in The American President. I usually like Michael Douglas, though. Except for a certain sameness that one can argue will start to infest any big star’s performances (Give the People What They Want) I have always liked Michael Douglas, especially his performances in The China Syndrome, Romancing the Stone, Wall Street, The War of the Roses, Falling Down, Wonder Boys, and Solitary Man. 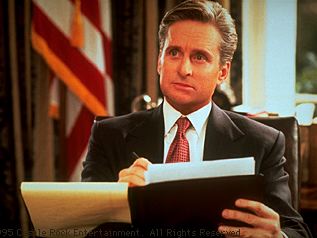 I am not a particular fan of Annette Bening, and I think in this movie she is miscast. Her performances always seem too “actressy” by about half, and this one is no exception.

The film suffers from a large cast of one-dimensional characters. As Patrick has pointed out in innumerable film reviews, why (in films like this one) does each character only get to be ONE THING?

In this regard, Richard Dreyfuss really suffers. He is presented as pure evil, a smug amalgam of Dick Cheney, Rush Limbaugh, and a horned lizard. He only lacks a moustache to twirl. He makes big trouble for the Michael Douglas character by smearing him on television. Then Michael Douglas finally gives his big speech… and we never see Dreyfuss again.

All of us know, of course, that this is exactly the way things play out in real life. After President Obama’s last State of the Union address, remember the shock we all felt the next day when the entire Republican Party had disappeared?

So I have been a willing participant in this new column… I have dipped my toe in the fetid pool of other people’s suggestions. But I need to be clear on this: I will NOT watch ANYTHING. F-Heads, if you want me to participate again, you had better come up with some mind-blowing doozies. Challenge me. Pique my curiosity. Make love to me… NOW.

*Oh, Studio 60 on the Sunset Strip! This was the only television show in history that I watched every week because it was so bad -- so ludicrously earnest about nonsense, so wrong headed at every turn. I reveled in its awfulness. Don’t believe me? You must read Nathan Rabin’s epic takedown of Studio 60. You will find it here.

In the comments section, please continue to give us suggestions for future installments of "I'll Watch Anything." Thanks!
Posted by Patrick Bromley at 7:57 AM