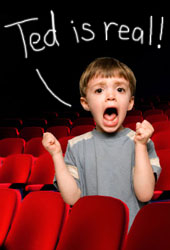 I know everyone important (i.e., readers of this site [e.g., F-Heads]) totes saw last week's teaser for the Total Recall trailer, but did any of you watch the actual trailer (release date: Aug. 3, 2012) that debuted on Sunday (because Jesus)? No? None of you did? That's OK; it wasn't very good! Well, that's not entirely true. It was a perfectly serviceable preview. For a beloved sci-fi movie from 1990 that did NOT need to be remade. Starring a lead actor who seems like he's an asshole in real life. And a lead actress who is inarguably attractive, but also dead inside. And a supporting actress who is maybe the hottest alien on the planet. And Bryan Cranston. Yeah. Here are a few other trailers that don't piss on Philip K. Dick's grave.

Guys, I'm conflicted. The statement, "From the creator of Family Guy," alone would normally be enough for me to check out, but DAMMIT if I didn't crack up a few times during the trailer. Sure, it's completely ridiculous, and I'd be lying if I said I didn't have a joke about The Beaver in my back pocket. But when Mark Wahlberg (who has HUGE nostrils, BTW) starts rattling off trailer-trash lady names in his thick Southie accent, I lost it. I just wish that stupid CGI stuffed animal didn't sound exactly like Peter Griffin.

And STOP. Trailer paused at 30 seconds. FRANKIE? Really. Elizabeth Banks' character's name is "Frankie." I am already SO checked out, but I'll muscle through (for you guys). Ok. NOPE. Paused again at 1:20 -- REALLY?! You would never hit on Elizabeth Banks? I mean, YES, I get it. They're brother and sister (side note: when did trailers start giving away entire PLOTS?), but if my sister looked like the chick who tasted like a burger in Wet Hot American Summer, I would DEFINITELY go to prison. Shall we continue? Oops ... paused at 1:35. Because YEESH Michelle Pfeiffer! You look like a third-act stand-in on Death Becomes Her. You're falling apart, is what I'm saying. MOVING ON. All right, I was able to finish it without any more interruptions. Knowing nothing about the movie before I saw this preview, I have to admit I wanted it to be a comedy. And I suppose it's wrong to judge a trailer based on my misplaced preconceived notions, but this is a pretty heavy film, especially for a late June release. Where are the robots in disguises? Where are the Hufflepuffs? Where are the wild, wild Jim Wests (desperados)? Unfortunately, seeing Chris Pine in a summer movie only makes me want to see a sequel to Star Trek that much more. Make it so, number one!

Quick introductory correction: these "Guardians" are NOT owls of Ga'Hoole. DO NOT MAKE THE SAME MISTAKE I DID! I love Alec Baldwin. Except, I probably don't. I mean, yes -- his acting and politics and matinee idol good looks are incredibly appealing. But he's also arrogant. And a jerk. At 54, he just proposed to his 28-year-old yoga instructor. Not horrible, but still ... a little creepy. Remember when he got kicked off that American Airlines flight because he was too busy playing Words with FUCKING Friends? Getting worse. And what about the time when he repeatedly called his daughter a "pig" in a voicemail? Total asshole, is the point I'm trying to make. And then there's this -- his lame attempt at an eastern European accent portraying a tattooed Santa in a cartoon for kids. Three parting thoughts: a.) that Easter bunny is nightmare fuel; b.) when did "The Sandman" qualify as a beloved childhood mythical figure?; and c.) for a quality children's movie (Claymation, to boot) that looks fun and clever and creative, I highly recommend you check out the trailer for ParaNorman (release date: Aug. 17, 2012). It looks unbelievably better than ... whatever Rise of the Guardians is.


Katniss? #dodougsjobforhim
Posted by Patrick Bromley at 7:43 AM