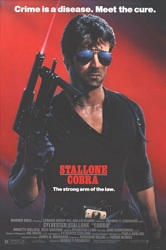 Why is Sylvester Stallone an action star?

I say this as someone who likes Sylvester Stallone (even if he ranks fourth or fifth on my list of favorite action movie heroes). He's made a bunch of movies I like -- though when it comes to action movies, I think he's just been in some that I happen to enjoy (like Cliffhanger, Tango & Cash and, of course, Demolition Man) instead of necessarily being the reason I enjoy them. I even get why he's a movie star -- especially in something like Rocky, where he's great at playing a guy who is sweet and decent but has been hit in the head too many times. He has a bruised charm that makes him hard not to like.

His action movies have none of that, though. He's never sweet. He's never even really likeable. I don't know where Stallone fits in as an action star.

Think about it:
Schwarzenegger is The Other. The Superman.
Bruce Willis is the smartass everyman.
Van Damme is the athlete, capable of tremendous physical feats while still projecting a vulnerability for which he rarely gets credit.
Seagal is the dark, mysterious guy with the shady past and incredible speed.

Where does this leave Stallone? What does he bring to the party? 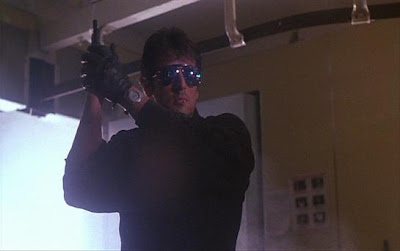 Confusing the issue even more is the fact that he's probably the guy most closely associated with '80s action. When people are referencing the genre (usually to disparage it), it's his monosyllabic mumble that they're imitating (that is, when they're not doing a terrible Schwarzenegger impression). But that's really just because he's so closely associated with John Rambo, arguably the single biggest and most iconic action hero of the decade. Stallone, then, is by default the definitive action star of the '80s (and beyond), but I can't quite put my finger on why.

Marion "Cobra" Cobretti, the hero of Cobra, is basically just a glammed up version of Rambo. He speaks very little. He shoots first and asks questions never. The difference is that he doesn't really believe in anything beyond killing bad guys; at least Rambo lived by a code, even if that code was a disgusting and jingoistic revision of U.S. politics and our role in the Vietnam war (I'm referring to Rambo: First Blood Part II here, because First Blood is actually really good). Cobra has no code. No politics. It only believes in surfaces.

I don't even know where to start when talking about Cobra. It's one of those movies that actually cries out for its own F This Movie! commentary track, if only because there's so much to point out and discuss that space here won't allow. I remember I desperately wanted to see it as an 8 year old, I think because Cobra's gun has a laser sight on the poster and I had never seen anything like that. I might have thought he was using an actual laser gun, until my brother explained to me what a laser sight was. Still, it sounded like the coolest thing ever. It's not.

Turns out the movie is basically targeted at 8 year olds, because anyone older than that can see through just how vapid it ends up being. Here's just an example of how stupid the movie is. It opens with shots of a bunch of guys standing in a warehouse (one that doesn't appear to contain any goods, only tattered sheets, mood lighting and trashcan fires) and CLAPPING AXES TOGETHER IN UNISON. They don't speak to one another. They just stand there and bang axes. And they look like normal guys, too. Some of them wear suits and ties. I'm dying to know more about the home lives of these guys. Where do they tell their wives they're going after work? "Sorry, honey, I'm going to be a little late. Got my Tuesday night axe-clapping group. Go ahead and start the meatloaf without me." And do these guys talk to each other before the axe clapping starts? "So can you believe those '85 Bears? Oh, shit, it's 7 o'clock. Time to start banging our axes together."

And, yes, I assume that even back in 1986 people referred to that Bears team as the '85 Bears.

Then we get to Marion "Cobra" Cobretti, which is maybe the most ridiculous action movie name EVER, who shows up at a grocery store to take care of a hostage situation. He's revealed in pieces: first, we get his car, a 1950 Mercury (because OF COURSE IT IS) with a license plate that reads "AWSOM 50." Then it's a progression of "coolness" -- boots, jacket, gloves, sunglasses, matchstick in the mouth. Everything about him is COOL. It's such desperately manufactured nonsense. 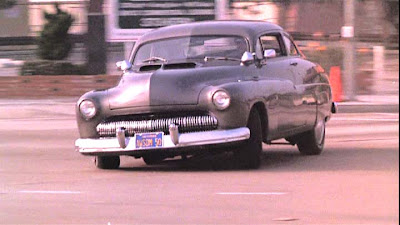 Everything in the movie follows this same formula. Director George P. Cosmatos, who previously directed Stallone in Rambo: First Blood Part II, isn't interested in logic or coherence. He's only concerned with what a particular image looks like at the time (in that guy, he's kind of like a precursor to Michael Bay). The guys banging axes in unison looks cool, I guess, so we're not supposed to question the logistics behind it.

Of course, after shooting the guy holding people hostage (only after opening a can of beer and DRINKING IT DURING THE STANDOFF HE IS SO FUCKING COOL), Cobra takes his gun with the COBRA DRAWING ON THE HANDLE and twirls it around the way NO ONE DOES (Robocop does not count). It's another moment designed to remind us that Cobra is the coolest. That's pretty much the whole movie: a constant series of reminders that Cobra is AWESOME (sorry, "AWSOM") intercut with a bunch of dirty, sweaty bad guys committing brutal murders.

Oh, right, the bad guys. They're led by Brian Thompson, playing a character referred to only as the Night Slasher: 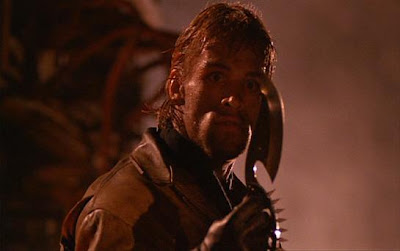 He barely speaks in the movie, instead spending the majority of his screen time glowering, sweating and sharpening a series of silly, elaborate knives. Also, murdering. Guy loves murder. His whole motivation is the establishment of something called the New Order, which is never really explained but which I understood to mean chaos and probably more murder. All the axe-clappers at the beginning of the movie are presumably believers in the New Order, as is the guy Cobra blows away (sorry, "wastes") in the grocery store. One of Cobra's co-workers on the force, a corrupt cop named STALK (Lee Garlington, here a kind of white trash Stockard Channing) who appears to be the Night Slasher's girlfriend, is also a secret believer. The New Order seems to be made up of mostly men, though, so I guess it's kind of like Promise Keepers.

But here's where the New Order's plan breaks down: after Brigitte Nielsen (who was married to Stallone at the time the movie was made, and who really was very striking back in the '80s) sort-of-but-not-really sees them post-murder on the side of the road, they devote ALL their time, energy and resources to tracking her down and killing her. In fact, they catch up with her again in a parking garage, but fail to really do anything (except kill Sledgehammer! with an axe) but give her an EVEN BETTER LOOK AT THEIR FACES.

This is one of the stupidest plans in action movie history. Is the Night Slasher really that concerned about a witness? The guy is running around murdering people left and right, often in broad daylight. His whole plan is to burn the world, and he's afraid of being picked out of a lineup? It's such weak motivation just so that Cobra can spend the rest of the movie protecting Brigitte Nielsen, and the movie would actually be so much better off without her character at all. If the bad guys were really just violent anarchists, it would make sense to unleash Cobra on them -- a cop who's willing to do anything to take down bad guys who actually do anything.

As it stands, Cobra isn't a character. He's a collection of gimmicks and clothes. He's a matchstick and a pair of sunglasses. He's a trenchcoat. Whenever he's got time to himself, he cleans or works on his gun. Seriously. That's his only character development. I know it's supposed to suggest his total devotion to the job, but it just comes off as ridiculous. Everything in the movie comes off as ridiculous. Facist, too, but this was the '80s. Cobra is constantly being chided by one of his superior officers (Andrew Robinson, Hellraiser dad) for constantly killing guys, but we're supposed to hate him for it. He's standing in the way of Cobra doing his job, and his job is murder. At least Lethal Weapon rationalized Martin Riggs' body count with the fact that he was crazy. In Cobra, it's just supposed to be another thing that makes him cool.

There are '80s action movies that transcend that category and exist as just good movies -- I would recommend them to anyone. Die Hard. Lethal Weapon. Robocop. The Terminator. Cobra is not one of those movies. But, like Action Jackson and Invasion U.S.A., it is an essential movie for students of the '80s action genre. It is violent and hollow. Trashy. Fascist. Stupid. Everything we've come to associate with the period.

Perhaps the most interesting thing about Cobra is that it basically represents the version of Beverly Hills Cop that Stallone never made. The screenplay, written by Stallone (based on the novel Fair Game, later made into an action movie with William Baldwin and Cindy Crawford, meaning the same book inspired two completely terrible action movies), was originally intended to be Beverly Hills Cop. When the producers of that movie decided to take things in a more comedic direction, Stallone turned his script into Cobra. It's self-indulgent trash, designed to build the mythology of Stallone's own awesomeness while still not really explaining what it is that makes him a compelling action hero. He looks good in sunglasses, I guess.

In the end, Cobra is really only memorable for two things: Stallone telling the grocery store terrorist to go ahead and blow the store up because "he doesn't shop here" (just one of many terrible one-liners Stallone wrote for himself) and the crazy bad guy death, in which (SPOILER) the Night Slasher is hung on a giant meathook and pushed into a giant furnace to burn alive. It is a terrible movie, but also kind of awesome. I'm hardwired to respond to stuff in it, and I hate myself for it. It's like looking at a picture of Kim Kardashian -- I know I should know better, but I can't help it. I want to punch my own boner.


Got an action movie you'd like to see highlighted in a future Heavy Action? Discuss in the comments below.
Posted by Patrick Bromley at 5:08 AM