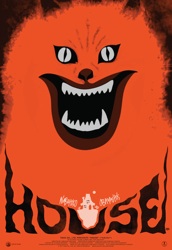 The back of the Criterion Collection Blu-Ray of starts with this line: “How to describe Nobuhiko Obayashi’s indescribable 1977 movie House (Hausu)?” Well, I don’t know either.

A brief synopsis of the plot: seven schoolgirls (Gorgeous, Fancy, Mac, Prof, Kung-Fu, Melody, and Sweet, feeling broadly like fairy tale tropes) go on vacation to a house in the countryside, inhabited by Gorgeous’ aunt and an ominous white cat. As time passes, the house ends up attacking and devouring the girls, except for Gorgeous, who is the only survivor, and replaces her aunt as the ghoulish, vampiric resident of the haunted house, presumably to continue feeding on living innocents.

It sounds potentially terrifying. There’s plenty of examples of horror movies using haunted houses to beautiful, gruesome effect, and I was sort of hoping for it here, although I am absolute in my cowardice and fear when it comes to horror films (I’ve said before, I don’t need to fill my imagination with images that are going to slice me up in my dreams), thinking that Patrick was yanking my chain for the sake of an “I’ll Watch Anything” column.

Except this movie isn’t scary. It’s more silly than anything. 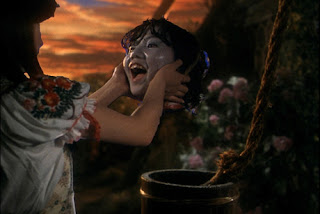 It doesn’t really have a plot. The movie takes its time getting the girls to the house, and then they try to escape the house, but that’s about it. Since it doesn’t really have a plot, it doesn’t seem to have discernible transitions; it’s a jumpcut from this place to this other place for which you have no context. Perhaps director Nobuhiko Obayashi’s background as an “ad whiz” explains the hiccups in stringing scenes together.

The music and sound design make no sense. Often, there are whispers or oddly placed voices, and I’m not sure if that’s to add to the creepiness of the house, or it’s one of those throw-ins for the sake of tone. Regardless of why it’s there, what it reminds me of is one of those videos that go along with karaoke versions of songs, but since the cheap places I go to karaoke can’t afford copyrights for the actual videos of the songs, they end up having nonsensical videos. For instance, the video for Michael Jackson’s “Billie Jean” is… an Asian woman in a sundress and a garden hat, riding her Schwinn in circles. That’s what this film feels like. (Also, no one should ever karaoke a Michael Jackson song; the dude was the King of Pop for a reason. The reason is that he could really sing.)

The camera positions don’t make any sense. There is minimal to no explanation for most things that happen. The aunt character disappears about halfway through the movie. Is it because she’s taking over Gorgeous? I’m not sure. There are some odd framing issues, like when the viewer watches a scene between Gorgeous and her father’s new girlfriend through the distortion of a bunch of small bathroom glass windows. It’s cool, and I suppose metaphorical, but like most of the movie, I don’t know if it’s pointing at an idea from earlier in the movie or in culture or if it’s just there to be there.

Part of the reason (perhaps much of the reason) for the movie’s disconnectedness or lack of intense horror could stem from Obayashi’s consultation with his 11-year-old daughter, who he dredged for new ideas, claiming that adult minds also sought what can be understood. It certainly explains the feverish nature of the movie and the lack of referents or signposts for the viewer, but then why look for scary ideas and then present them in un-scary ways? A girl gets eaten by a piano while her dismembered fingers continue to play on, another gets her severed head pulled from a well, and another gets smothered beneath flying futon cushions. None of these potentially terrifying moments really play for chills, but not necessarily for laughs either. If I’m not scared at what’s happening, or laughing at the absurdity at the events, then what am I left with? Sadness (no)? Confusion (yes)? Anger (not really)? I’m not demanding to be told what to feel, but I’m completely at sea as to what to do with what I’m seeing, as much as I appreciate the idea of trying to come up with new fears. 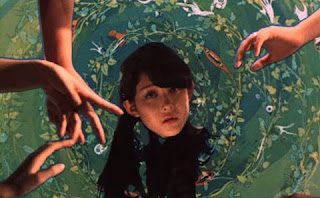 To add to my confusion, the studio that commissioned House wanted a movie like Jaws. I can’t get to the place where Jaws is some kind of genetic precursor to this movie; it’s not apples to oranges, it’s apples to horses. I imagine that a Japanese studio wanting a Japanese derivative of Jaws did not imagine this, rather like how Absolut Vodka executives probably did not have this in their heads when they told Zach Galifianikis to make an ad for them.

Is it worth watching? There is plenty of praise for Obayashi’s visual style, and his background in commercials definitely shines through, but I’m not totally sold on the greatness of Obayashi’s style; it feels more like style for the sake of style, as if he wanted every trick he knew to be on-screen. The blue-screen effects are dated now, but I appreciate them in the context of the times and for being the most interesting parts of the movie. It would be hard to recommend this, but if I were programming a hypothetical horror movie festival lineup, then House would make the cut, because it’s weird and completely different than almost anything you’ll ever come across, and for a movie like House, that’s all it is asking for.
Posted by Patrick Bromley at 6:04 AM