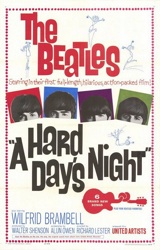 Can you guys believe it? 400 posts! It seems like just yesterday we were at 398. Let's celebrate by busting out some more of our favorite movies of all time!

Erich: It was tough enough coming up with a list of my Top 5 movies, and now Patrick wants me to fill out the rest of my Top Ten? If it wasn't for you, faithful readers, I'd have told him to stick his list where the blog don't shine. At the risk of losing my rebel cred, here are five more movies that I love, in no particular order. Are they favorite movies six through ten? I dunno. You tell me. Except, don't tell me, because YOU DON'T KNOW ME!!!

A Hard Day's Night (1964, Richard Lester) - Roger Ebert once said this was the kind of movie that could be watched again immediately after it was over. I don't always agree with Mr. "Super-spoiler" Ebert, but I do here. The Beatles' feature film debut is funny, wonderfully surreal, and has great music. You can't buy me love, but feel free to buy me a copy of this movie when it hits Blu-ray.

Young Sherlock Holmes (1985, Barry Levinson) - I missed this '80s gem when I was a kid, probably because I was busy watching A Very Brady Christmas for the hundredth time, with no responsible adult around to break that VHS tape in half and put this movie on for me instead. Given the recent fascination with reinventing Sherlock Holmes, it's worth going back to this (let's pretend) original. It’s got mysteries, swordplay, killer pastries, and a murderous cult. Not only was this film made by many of the same people responsible for Temple of Doom, but it is a better movie.

The Muppet Movie (1979, James Frawley) - I know Patrick and I recorded an entire podcast about this one, but I'll say it again; The Muppet Movie is amazing. With sharp writing, adult humor, pitch-perfect cameos, and Paul Williams' heartfelt music ("The Rainbow Connection" is still my daughter’s lullaby of choice), it's the complete, fuzzy package. Forget the toy commercials that pass for kids movies these days. Plunk the youngsters down in front of Jim Henson's timeless classic instead. Just be prepared to answer questions like "Why does that bad man want to hurt Kermit?" and "Who's Dom DeLuise?"

Groundhog Day (1993, Harold Ramis) - It's a good thing Harold Ramis snapped up this rodent-themed celebration before Garry Marshall began his cinematic holiday rampage. Starring Bill Murray at his sharpest, the film is both ambitious and accessible. Ramis and co-writer Danny Rubin aren’t afraid to tackle issues of mortality and the meaning of life, wrapping big philosophical ideas in a tight comedic package. The love story between Murray's cynical weatherman and Andie MacDowell's idealistic TV producer may not be conventional, but when they finally (spoiler!!1!) get together, the moment is fully earned. Easily one of the best comedies of the last 20 years.

UHF (1989, Jay Levey)- Finally, my left-field pick, a movie I love but can't really defend. A silly slice of pop culture awesomeness starring the one and only Weird Al Yankovic as a dreamer who transforms a low-rated TV station into a ratings powerhouse on the strength of shows like "Wheel of Fish" and "Druids on Parade." The faux-TV format gave Yankovic the freedom to parody everything from Indiana Jones to Network to The Beverly Hillbillies. The film also introduced the world to a pre-Seinfeld, pre-racism Michael Richards, as the mop-loving janitor Stanley Spadowski. Sadly, Weird Al made just this one movie (heck, even Pee-Wee got a second chance). It’s almost as sad as knowing that no one under the age of 30 even knows what a “UHF” is.

Alex:
Boogie Nights (1997, Paul Thomas Anderson) - Paul Thomas Anderson is, without question, a big bright shining star. Erika provided a perfect and adorable appraisal during the show about her favorite movies, usurping every bit of my thunder in the process.

The Empire Strikes Back (1981, Irvin Kirshner) - In which a young Alex first learned that our heroes don't always win the day.

Goodfellas (1990, Martin Scorsese) - I would argue that it is the most re-watchable movie of all time.

United 93 (2006, Paul Greengrass) - I've never seriously attempted to persuade Patrick to do a show on this movie because BUMMER, but that shouldn't dissuade any of us from hailing it as a masterclass of dramatic filmmaking. That's precisely what it is.

Dr. Strangelove or How I Learned to Stop Worrying and Love the Bomb (1964, Stanley Kubrick) - My favorite Stanley Kubrick picture by a mile, because in addition to all his standard-issue brilliance, it's also one of the best comedies of all time.