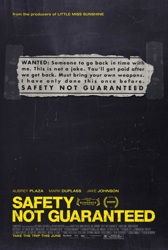 With its quirky indie premise, its indie rock soundtrack and the fact that it stars one of today's indie movie darlings, it would be easy to dismiss Safety Not Guaranteed as warmed-over Sundance fodder by way of 1997 -- "hipster bullshit," as at least one internet commenter has stated. That would be missing the point.

Based on a real classified ad placed in Backwoods Home Magazine back in 1997 (which itself was a goof, though it was picked up by a number of outlets as if it was the real deal), Safety Not Guaranteed stars Aubrey Plaza as Darius, a downbeat (because Aubrey Plaza) intern at a Seattle magazine who is chosen to accompany a douchey reporter (Jake Johnson) on a road trip to investigate a mysterious ad that reads:
Eventually, Darius tracks down the author of the ad: it's Kenneth (Mark Duplass), an intense and possibly paranoid grocery store clerk with secretive reasons for wanting to go back in time. As the pair get to know one another (and train for the upcoming trip to the past), Darius has to confront her own fears and regrets and determine if the very convincing Kenneth is actually on to something or just batshit crazy. 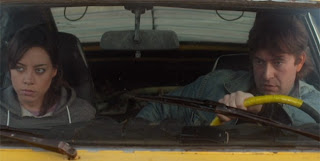 Those expecting a hard sci-fi exploration of time travel are going to be let down by Safety Not Guaranteed, which really only uses time travel as a plot device -- it's the engine designed to drive a thoughtful and well-observed character study. Ultimately, Safety Not Guaranteed is really about Irony vs. Sincerity, and which one we will use to govern our lives. It's very easy to read a plot synopsis of the movie and imagine all the ironic ways it could approach the material; just the idea of basing a screenplay on that classified ad practically has air quotes around it. But sincerity is much, much harder. It requires opening yourself up. Putting your trust in something. The movie gets that, and while I won't explicitly say what side it comes down on, when Jake Johnson triumphantly pumps his fist in the air like Judd Nelson at the end of The Breakfast Club, it's a pretty clear declaration. The people who have written the movie off as just another hipster indie romance have already chosen irony. That fist pump won't mean anything. The movie will be lost on them.

The casting of Aubrey Plaza is key here, because irony and sarcasm are her default modes -- her enormous eyes were practically made for rolling. That's why it carries so much more weight when her defenses begin to melt in the presence of Kenneth's steadfast belief and commitment to something fantastic. She wants sincerity, even if she hasn't realized it. Mark Duplass has a much trickier role, making Kenneth believably eccentric without overdoing the crazy, always hinting at the damaged layers beneath (it seems for a time that the movie is going to take him into some Fisher King territory, but, to the movie's credit, that is sidestepped). Duplass has quickly become one of those actors I will gladly watch in anything (which is good, since he's showing up in everything). He's natural and likable but never trying too hard to be liked -- there is an undercurrent of something...call it hostility, call it an "edge" -- to his performances that keeps an audience on their toes. Interesting, too, that he co-wrote and co-directed (with his brother Jay) Jeff, Who Lives at Home earlier this year, as it, too, addresses how much sincerity we will allow to guide our choices.

Jake Johnson has his own subplot that, for a while, feels a lot like a sitcom B-story. It's only as the movie progresses that his story comes into focus: he's just another person haunted by a memory from his past, attempting to go back in time in a much more conventional sense. Some of his scenes with Karan Soni, playing the geeky, virginal intern who rounds out the journalist trio, don't quite ring as true as other scenes; the pair feels more like characters in a movie in their worst moments. And, yet, it all comes down to changing the future. Johnson, perhaps resigned to his present, sees an opportunity to alter the destiny of another character for the better. On that level, the scenes work. 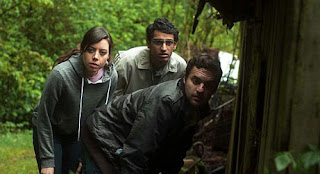 The movie rushes things at the end, taking shortcuts both narratively and emotionally, as though a couple of scenes are missing that would have filled in the gaps. By that point, though, it hardly matters, because the characters have earned our investment. I love that writer Derek Connolly (who won the Waldo Salt award for his screenplay at Sundance) and director Colin Trevorrow don't shy away from making big choices in the resolution. There's another version of the movie that exists that hedges its bets and plays coy with the sci fi elements, but not this one. This one earns its fist pumps.

This weekend, I also had the chance to see Wes Anderson's latest movie, Moonrise Kingdom, which actually works as a really interesting companion piece to Safety Not Guaranteed: both movies are about feeling like an outsider and constructing an elaborate fantasy to deal with that, and about how those fantasies are better when shared with someone else. When just one person believes in it, it remains a fantasy. When two people believe it, it becomes something real. The greatness in both movies is in their ability to make us believe it, too.

Some movies just know how to push our buttons. Safety Not Guaranteed pushed a whole bunch of mine. It's one of my favorite movies of the year.
Posted by Patrick Bromley at 6:16 AM