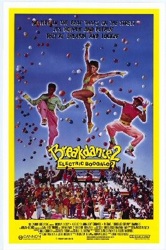 I have never seen Breakin'. I hope I can still follow Breakin' 2.

Notorious for being one of the worst and most unnecessary sequels of all time, Breakin' 2 seemed like a perfect movie for me to view for an "I'll Watch Anything" column (the movie is currently streaming on Netflix Instant). Its legacy is obvious, as it has become shorthand for every hilarious person to make a joke about a sequel. Anytime someone makes up a fake Part Two to a movie, they subtitle it Electric Boogaloo. Inception 2: Electric Boogaloo. Schindler's List 2: Electric Boogaloo. This trend remains disturbingly prevalent despite the fact that the reference hasn't been funny since 1996. Is this really still the best we can do? Got to give it up for Doug, whose default sequel joke is The Return of Durant. Better yet, it always has been.

But the joke doesn't just seem to be that the words "electric boogaloo" are funny sounding, even if they are. There's an implied criticism of the notion that a movie -- nay, a SECOND movie -- was made entirely about breakdancing. Ha ha, good one. Yes. It's ridiculous that they made a whole movie about dancing. That would never be done again. Unless you count Save the Last Dance and How She Move and four Step Up movies and two Honey movies and two You Got Served movies and Roll Bounce and two Stomp the Yard movies and Center Stage and Heavenly Bodies and Dirty Dancing and Dirty Dancing: Havana Nights and not one but two movies based on the Lambada: Lambada and The Forbidden Dance. Other than that, though, no one would make a movie about dancing. 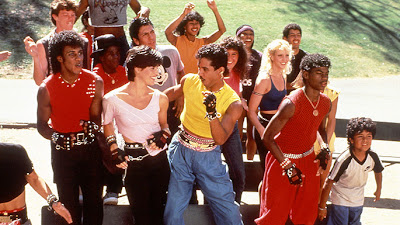 Released the SAME YEAR as its predecessor, Breakin' 2 finds the stars of the first movie, Lucinda Dickey, Adolfo "Shabba-Doo" Quinones and Michael "Boogaloo Shrimp" Chambers (and, yes, they are credited on screen as such) reprising their roles as Kelly, Ozone and Turbo, respectively. Their relationship is a little confusing, because it seems as though Kelly and Ozone haven't seen each other in a long time (neither knows what the other has been up to), but also that they are dating. The main thrust of the movie involves an evil developer's attempts to shut down Miracles, the graffiti-painted community center where Ozone (who doesn't own a full shirt -- only halves) teaches dance classes. The gang decides to put together a street festival to raise the money and save Miracles.

Yes, it's the old Mickey Rooney/Judy Garland "let's put on a show" plot, only with waaay more neon clothing and popping-slash-locking. Whether it was because of the rushed production schedule (again, the original and the sequel were released THE SAME YEAR) or just overenthusiasm on the part of writers Jan Ventura and Julie Reichard, Breakin' 2 is unable to decide on a single conflict. The movie's solution is to have EVERY conflict: they need to earn $250,000 to keep the community center open. Kelly has a job offer to dance in France, and has to choose between following her "dream" and being happy with the "street kids" (her dad's words, NOT MINE). Turbo has a crush on a girl (Sabrina Garcia) he wants to ask out but doesn't know how. Ozone's ex-girlfriend is threatening Kelly to stay away. A rival crew is causing trouble for our lead characters. Turbo is hurt and hospitalized.

All of this -- ALL OF THIS -- is resolved with breakdancing. Are you listening, Israel and Palestine?

I kid Breakin' 2, of course, but there's something sweet about the degree to which it suggests that dancing brings us together and forms community. It's right there in the opening number, in which the main characters, Ozone (who I shall call "DeBarge"), Turbo and Lucinda Dickey (who is AWESOME and should have had a longer career) dance down the street and get the entire town to join in with them:

A lot of the dialogue in the movie feels improvised by actors who maybe didn't spend a lot of time studying Del Close. It leads to exchanges like this:


KELLY
It looks fantastic. You guys did a great job.

KELLY
Man, this place is great! I love being here.

Or my second favorite:

KELLY
Oh, man, you have mirrors? This is great!

When they first come up with the idea for the street festival to raise the necessary funds, someone says "We'll dance!" No duh, your movie is called Breakin' (2). Then someone else chimes in with "We'll have a juggler!" (Or something). That's as far as the ideas go. Dancing and juggling. This wouldn't be that funny on its own, except that later, Turbo gets on TV to advertise the street festival and says "There will be dancing, juggling, everything!" Once again, the two things mentioned are dancing and JUGGLING. Is juggling that big of a draw? Did I miss out on the '80s juggling craze that culminated in a movie called Jugglin'?? WHY ARE THEY TRYING TO SELL US ON THIS JUGGLING?

There's a sequence halfway through the movie in which Turbo and Ozone (also the names of my favorite Autobots) do a kind of "Girl is Mine" dance sequence with a life-size doll that's laying around the apartment. WHY DO THEY OWN THIS? I don't know. Surely it has come to life before and tried to kill one or both of them. 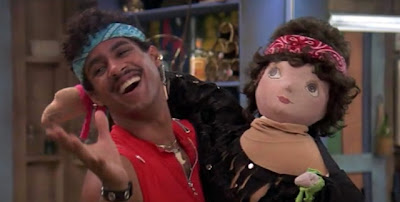 The way the scene is directed, each guy is imagining the doll as the girl he likes, so the scene keeps cutting back and forth from the doll to Lucinda Dickey or the doll to Sabrina Garcia. But then the guys get jealous of each other dancing with their "girlfriend" and proceed to have a tug-of-war with the doll until it RIPS APART and its insides spill out everywhere. Director Sam Firstenberg missed a great opportunity here to continue with the motif and cut back to Lucinda Dickey dead on the floor, her blood and entrails spilled everywhere. I mean, commit to the bit, guys.

The opening credits tout plus size character actress Lu Leonard as "The Head Nurse," which is a great credit because it presumes that a) I know who plus size character actress Lu Leonard is (I do) and b) it tells us that there will be a HEAD NURSE at some point in the movie. Not a regular nurse. A head nurse. The one who is in charge of the other nurses, at least for the duration of the shift that she and the nurses under her happen to be working.

Seriously, I couldn't get that credit out of my head, because it suggested that sooner or later, this movie was going to take a detour to a hospital. Every time I would be lulled into complacency and begin to enjoy a dance sequence or something, I would have to snap back to reality and remind myself "Holy shit, we're 50 minutes into this thing and we still haven't met the HEAD NURSE. What is going to happen? Who is going to the hospital? How will he/she be injured? Is someone going to die in Breakin' 2: Electric Boogaloo? Is "electric boogaloo" some kind of '80s "street" term for defibrillation? "Shit! Ozone is in cardiac arrest, y'all! Give him the electric boogaloo! CLEAR!!"

The hospital scene eventually arrives (Turbo's stuntman takes a bad fall down some concrete steps), and Lu Leonard makes a nearly wordless appearance as the Head Nurse. It culminates in a huge dance sequence (OF COURSE) in which Ozone and Kelly produce their very own lab coats and wheel Turbo out on his bed, while everyone in the hospital -- including some sexy nurses who weren't working there a minute ago and ALL OF THE PATIENTS -- join in. The scene that's missing from this dance number is a shot of the hospital hallway littered with the dead bodies of the patients when it's all over.

Clearly I think Breakin' 2 should have been WAY more violent than it is.

In the movie's best sequence, Turbo is so excited that the girl he likes might go out with him that he begins to dance, and his elation allows him to defy the laws of gravity: he dances up the walls and across the ceiling. The effect is shaky -- the camera moves in such a way that it's obvious the room is a rotating set (Wes Craven did it much better during Tina's death in the original Nightmare on Elm Street) -- but the results are still fun. Ok, Gene Kelly splashing in puddles it ain't, but it's very sweet.

See, that's the thing I didn't expect from Breakin' 2: Electric Boogaloo. It's the perfect movie for contemporary audiences, with their hip and ironic sensibilities, to make fun of. I should know; I just spent 1,000 words making a bunch of jokes about it. But the people who sit down to watch this movie just to feel superior to it are assholes. Of course we are superior to it now -- on the surface, anyway. It's silly. It's SUPER dated. The clothes are terrible. The movie is cheap and not very well made. And, yet, it is sincere, and that's something that all of the hipsters making their "electric boogaloo" jokes won't pick up on. There is such a sense of joy and fun in the movie that it's impossible to dislike, ridiculous as it may be.

It didn't need to be sincere. It's very existence is born of cynicism. Produced by Menahem Golan and Yoram Globus through Cannon films (a company that's taking up permanent residence in the pages of F This Movie!, thanks to yours truly), both Breakin' and Breakin' 2 were made solely to cash in on a dance craze and get young people to the theater for a weekend. It's an exploitation movie -- just not in the traditional "grindhouse" sense to which we've grown accustomed. As such, it would have been very easy for everyone involved to show up, do some dancing and call it a day.

Yes, that is essentially what they do, but not before they infuse the movie with energy and fun. Everyone has a great time when they dance, and it shows.

So go ahead and make fun of Breakin' 2: Electric Boogaloo. It's an easy target. But it's a movie that captures a specific cultural moment; while breakdancing may have seen like a fad at the time, just about every move on display in the movie still shows up in every hip-hop dance seen today. I'll hesitate to call Electric Boogaloo "influential," but I guarantee it's a movie that meant a lot to the people who grew up in the '80s and dreamed of being a dancer. I'm actually glad to have seen it. Mostly for Lucinda Dickey. 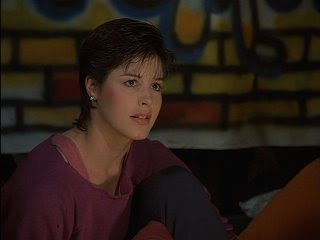