My Favorite Bond: JB on Goldfinger 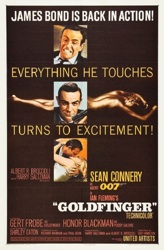 Our "My Favorite Bond" series continues with JB dipping himself in gold and championing the virtues of Pussy Galore.

50 Reasons Why I Love Goldfinger

1.    Best pre-credits “teaser” sequence…
2.    …that ends with one of the best quips in the entire series: “Shocking.”
3.    Sean Connery, inarguably the best Bond in the series’ history.
4.    The sight of Bond emerging from the lake in a wet suit and then taking it off to reveal a pressed, white tuxedo underneath.
5.    Best Bond theme song.
6.    The villain makes pocket money by cheating at gin rummy!
7.    Shirley Eaton painted gold — Yum.
8.    Score by John Barry, one of the best of the series
9.    Pussy Galore
10.    Miss Galore is clearly shown to be a lesbian; Bond “sets her straight” through sheer force of his machismo and will.
11.    “Hey Hey in the Hayloft!” Bond and Pussy’s fight in the barn.
12.    Fattest Bond villain. (Okay, that one’s personal.)
13.    Best Q briefing on new gadgets—
14.    “I never joke about my work, 007.”
15.    All that crazy shit going on BEHIND Q during that scene.
16.    Bond’s Aston-Martin…
17.    …and its famous ejector seat.
18.    One of the first Christmas presents I remember was the Corgi Toys’ miniature Aston-Martin. It was the coolest.
19.    That little car was the top-selling toy of 1964.
20.    The villain cheats at golf.
21.    Goldfinger is one of the few movies to make golf entertaining and suspenseful.
22.    Best henchman: Oddjob.
23.    Oddjob is so strong he can crush a golf ball with his bare hands — try it sometime. It’s harder than it looks.
24.    Death by razor-brim bowler hat.
25.    Pussy Galore.
26.    Best Bond villain scheme: irradiate America’s gold supply and render it worthless.
27.    Goldfinger was one of the first “next level” movie villains, like the latter Simon in Die Hard With A Vengeance or Joker in The Dark Knight. They are absolutely immoral.
28.    The laser-beam device Goldfinger straps Bond into, intending to melt his testicles.
29.     “Do you expect me to talk?” “No, Mr. Bond, I expect you to DIE.”
30.    A villain who serves Bond Mint Juleps -- Yum.
31.    Best “talking villain:” Goldfinger explains his mad scheme to his “investors” using huge, intricate models and relief maps minutes before he kills them — he’s just showing off.
32.    Death by car crusher.
33.    Pussy Galore.
34.    Is “Pussy Galore’s Flying Circus” the real inspiration for “Monty Python’s Flying Circus?” Think about it.
35.    “The taking of Fort Knox” is one of the best heist sequences in movie history.
36.    When things go bad at the end, Goldfinger instantly switches uniforms and shoots his own men — he is prepared for anything!
37.    The final fight between Bond and Oddjob, great fight choreography and one fight where Bond does not have the clear advantage.
38.    Oddjob smiling and motioning Bond to “hit him again.”
39.    The final time readout on the atomic device.
40.    Death by depressurizing airplane cabin window.
41.    Anytime a peculiar death scene in a movie is the subject of a segment on Mythbusters, you know the filmmakers have done something right.
42.    Pussy Galore.
43.    Latin America, London, Miami Beach, Switzerland, and Kentucky — this film is like taking a vacation!
44.    After a brief detour into cold war realism in From Russia With Love, Goldfinger writes the blueprint for the rest of the series.
45.    Entire film a testament to the skill and wit of legendary production designer, Ken Adams.
46.    Ken Adams was not allowed into the real Fort Knox. He had to guess at what the inside really looked like. Apparently, his guess was so on the money that it aroused the suspicions of the CIA.
47.    First Bond film to win an Academy Award, Best Sound Effects Editing.
48.    Goldfinger is not just the best—it is the best of the Connery films.
49.     Closing credit: “The End of Goldfinger. But Bond Will Return in Thunderball!”
50.    Pussy Galore 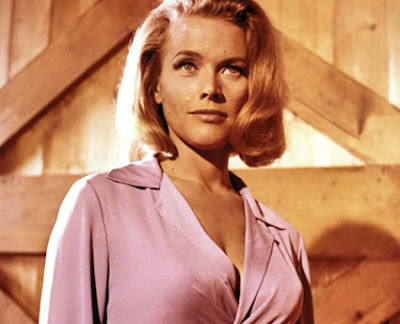 My Ranking of the Bond Actors: Connery, Craig, Dalton, Brosnan, Lazenby, and Moore.

Favorite Bond Theme Song: “Goldfinger,” sung by Shirley Bassey Runners-up: “Surrender” from the end credits of Tomorrow Never Dies, sung by K.D. Lang (it should have been used over the opening credits) and “You Only Live Twice,” sung by Nancy Sinatra

Underrated Bond Movie: The Spy Who Loved Me

Least Favorite Bond Movies: For Your Eyes Only and Moonraker

Best Single Line in a Bond Movie: (Alec Trevalian to Bond in GoldenEye) “I might as well ask you if all those vodka martinis ever silence the screams of all the men you've killed... or if you find forgiveness in the arms of all those willing women for all the dead ones you failed to protect.”

Previously on "My Favorite Bond":
Patrick on On Her Majesty's Secret Service
Posted by Patrick Bromley at 6:41 AM