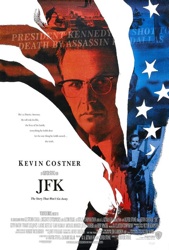 Or...So, What Really Happened That Day?: JFK and the Pursuit of Truth

For the longest time, I thought JFK was an attempt to shed light on the murder of the 35th president of the United States, an uncrackable mystery that probably grows less and less likely to be revealed as each decade passes.

Were this the case, we would relegate Oliver Stone’s 1991 opus of obfuscation to the bin of “ambitious failures” we so often reference here at FTM. Viewed through this prism, the movie is a failure on almost every level of storytelling. If a person or entity was located in Dallas at the time of the president’s murder, there’s an off-chance he, she or they were complicit in some fashion, according to this incorrect reading of Stone’s tale. The Dallas Police Department? Lots of smoking guns there. The CIA? Almost definitely. The Mafia? Why the hell not? Embittered Cuban exiles? Integral. A specific network of homosexual operatives and ex-military thugs in New Orleans? Probably the brains behind it all.

Taken as a story about the absolute truth of an event shrouded in ongoing intrigue, JFK is equivalent to the cinematic exercise of throwing some ideas against a wall to see what sticks … except that everything sticks. 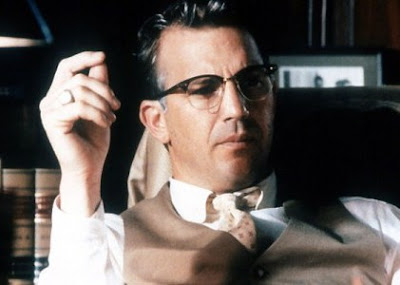 I don’t know quite when I stopped being frustrated about the fact that the version of events put forward by Jim Garrison (Kevin Costner) can’t possibly add up, but if I had to hazard a guess I’d say it dawned on me after what is supposed to be the closest thing to this movie’s pull-back-the-curtain moment: the conversation on Washington’s National Mall between Garrison and a well-informed ex-Pentagon spook known only as X (Donald Sutherland, doing all the great Donald Sutherland things).

Up to this point, Garrison has encountered a host of mentally unstable individuals who can provide him only with fragments of a grand plot to murder the president. It’s as frustrating for the viewer as it is for Garrison. He knows he is close to something, but every question answered carries with it a new tranche of uncertainties to tackle.

And so he finally gets a prolonged meeting with a man who seems confident, levelheaded and plugged into the precise Washington backchannels he needs to crack this case. And X comes through, yielding a windfall of information about everything from Kennedy’s intent to scale back operations in Vietnam to suspicious last-minute changes to Kennedy’s security detail in Dallas.

When it’s over, Garrison asks X to appear in court to drop similar truthy bombs on to the jurors. His response? I quote, “No chance in Hell.” His reasons are essentially that he would never even make it to the courtroom because he knows too much, but I think the overarching point is that Stone has chosen to take the one source of reliable information in this impossible quest for the truth and essentially render him null and void. You’ll notice that even though Garrison has secured a healthy bounty of intelligence on the matter, almost none of it makes into Garrison’s final, sprawling courtroom monologue.

And the footage shown over the majority of that monologue? Apart from serving as a clinic on film editing from Joe Hutshing and Pietro Scalia and a master class in cinematography from Robert Richardson, it plays out less like a coherent documentation of one of the most chaotic days in the history of the country and more like Garrison’s paranoid fever dream. A frenetic and relentless amalgam of close-ups, zooms, wide shots, black-and-white, color, real footage, re-enactments, I’m not being bombastic when I say it’s one of the best single sequences ever committed to film.

Which of course brings us back to the central question of my assertion: does it matter that the sequence doesn’t really come together from a storytelling perspective? I’d argue that in this case, not only is it okay, it is precisely the point. Garrison himself seems resigned to defeat even as he is wrapping up his closing remarks. He eloquently implores future generations to continue to question the facts given to them in a pursuit of the truth, and even goes so far as to suggest overthrowing the government if the pursuit does not pay dividends, “like the Declaration of Independence says to.”

Structurally, this is a downright bizarre way of telling this story. But Stone pulls it off because JFK is, quite simply, a brilliant achievement of technical filmmaking. I spoke already about Hutshing and Scalia’s pristine editing job and Richardson’s daunting cinematography, accomplishments so monumental, they all secured Academy Awards in a year where the whole of the film-admiring community appeared in the tank for The Silence of the Lambs. I understand it can be foolish to point to awards as a measure of a film’s success, but I’m highlighting this because the work of these artists was impressive enough to sway what appeared to be an impenetrable consensus for Jonathan Demme’s masterpiece. 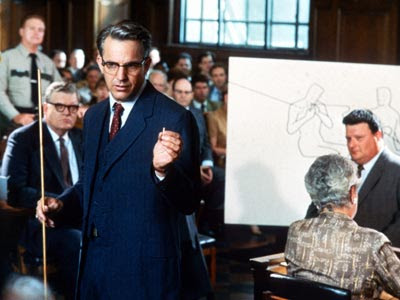 Beyond the technical achievements, Stone appears to have called in every favor owed to him by every actor in Hollywood in 1991, and they are all fantastic. For me, JFK’s who’s who of a cast never really feels like a stunt in the way that certain Garry Marshall holiday adventures often do. Stone just procured some of the best performers working at that time and put them to work in challenging and innovative roles. It is, to this day, some of the best work ever in the careers of Joe Pesci, Tommy Lee Jones, Gary Oldman, Ed Asner and Sutherland, which is really saying quite a bit.

But the lynchpin is Costner, who gives a singularly great performance that’s so starkly different from just about anything else in his canon. I’ve always considered Kevin Costner to be a movie star -- that is, he's an agreeable and handsome leading man capable of holding your attention for two hours while never really punching above his weight from a creative standpoint.

But as Garrison, he is bold, passionate and perhaps a little unhinged. None of this whole “pursuit of truth” malarkey I’m espousing here holds the slightest bit of water if you don’t give a damn about the pursuer. It all comes together in the aforementioned closing arguments. Costner, with ever-building desperation and passion, experiences what resembles a deeply personal emotional catharsis more than a nuanced legal argument before the court. Haunted for years by the atrocity he believes the government committed against its citizens, this is his unfurling of all the strands of justice he could muster from his dogged pursuit of justice.

It's a brave performance in a fantastic movie. It's a movie that would almost be disappointing if it presented itself as the definitive encyclopedia on What Happened That Day, Nov. 22, 1963. If you accept that gaining that knowledge is practically impossible, isn't one man's quest for that knowledge all the more fascinating?
Posted by Patrick Bromley at 7:33 AM