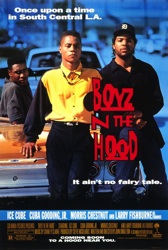 There is something that soars in my heart when I think about Los Angeles.

Although I live and work in the suburbs of Chicago now, and have lived here for much of my life, a significant portion of my childhood was spent in Southern California, amongst the palm trees, steep hills, and perpetual sunshine; my childhood there feels like it was bathed in the light of an eternal magic hour.

This romantic vision is the backdrop for John Singleton’s urban allegory, Boyz n the Hood. It feels weird even to call it an allegory, although it definitely is, only because there are quite a few parts that are firmly grounded in reality, although not without its cinematically heightened moments.

The National Film Registry has preserved the movie under its “culturally significant” designation, and I suspect this cultural significance comes from the film’s portrayal of life for a lower class black community in South Central (although the civic board would insist you call it South Los Angeles), mostly from the perspective of teenagers Tre, Doughboy, and Ricky. 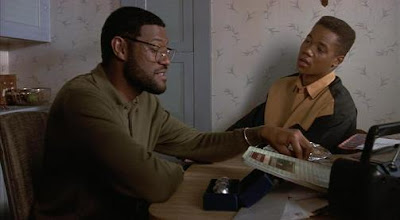 What's fascinating about Boyz is that its themes and content are now, mostly, the territory of documentaries, although Spike Lee, Scorsese, and Jim Sheridan have made feature films which cover the ground of poverty, urban life, and racial/identity politics that Boyz does; I’d add, though, that these three directors seem to have moved onto more mainstream projects. (Benh Zeitlin’s Beasts of the Southern Wild does give me hope that we may have another director who is willing to revisit these themes more than once. Singleton still stands out as the only West Coast guy out of that group.) Documentaries seem to more readily embrace the unblinking truthfulness and stark vulnerability that feel appropriate for the sobering topics that depictions of urban life conjure up.

It makes me curious, however, why so many feature filmmakers shy away from the subject. I suspect that it might be too difficult to maintain the right tone for a movie about urban life without veering into the clichés of terrible rap videos (gangbangers, gats, grills), or numbingly sad impoverishment, or overly sentimentalizing race and identity issues. Boyz stands out because it manages to balance out the aforementioned true-to-life elements of violence, poverty, and identity while still giving itself the leeway to be a movie, and not a documentary; it speaks with an allegorical tongue while still walking in the real world.

The balance between allegory and realism is most visible in the splitting of the burden of the narrative between the three male protagonists, who navigate the various obstacles and joys of their lives with varying degrees of success. Tre is the golden boy who mostly treads the straight and narrow, focused on his education and his career aspirations, although he is tiptoeing the line of bad decisions in his peer group and with his girlfriend. Doughboy has already served prison time, and is equally unafraid to use violence to threaten foes or protect his friends. Ricky is the star athlete, happy that his talents have given him a future, but not overly concerned with his environment, simply accepting that it will never change. I’d say that these characters are a little too close to being motifs to be actual people, but if one were to blend the traits of two or all three of these characters, then that would be closer to a realistic depiction of urban youth. Since the boys are more symbolic than realistic, it allows Singleton to focus on his ideas of violence, poverty, and identity, which can be plenty complicated already.

Cuba Gooding Jr. does well in his role as Tre, but my favorite performance is Ice Cube as Doughboy. It was a risk to take on Ice Cube, who had never acted and had made a name for himself as one of the premier gangsta rappers of all time. He easily wears the mantle of anger that is a part of Doughboy (and his own rap persona), but I’ve always liked his ability in the movie to soften his demeanor and project something that is tender and human underneath the rough exterior. He is the motif of the angry, young, urban black male, but at the same time he is also a human being with a fierce loyalty to his friends and family who understands the danger in which he lives. Singleton’s casting of him turned out to be an inspired choice. 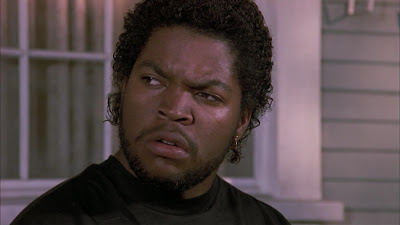 As his first movie, John Singleton made a huge splash, garnering a Best Screenplay and a Best Director nomination at the Academy Awards, all at the ripe age of 24. He continued to explore similar themes of violence, poverty, and identity in the films immediately after Boyz (Poetic Justice, Higher Learning, Rosewood) but seems to also have moved onto more mainstream projects, his latest being the Taylor Lautner vehicle Abduction.

I obviously don’t know, but maybe he’s said whatever he had to say about themes we see in Boyz; perhaps the topics themselves only have a certain shelf-life within the creative life of a director before he or she has to move to something else. It makes me a little sad that I haven’t liked his other movies as much as Boyz, and it makes me suspect that maybe that movie was not the signal of burgeoning talent, but was the premature peak of his artistic output. What remains unquestioned in my mind, however, is that Boyz n the Hood stands as a special piece of art in his career, in 1991, and in cinematic history.
Posted by Patrick Bromley at 6:53 AM