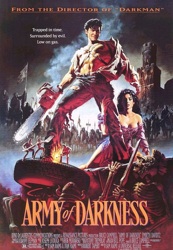 Oz the Great and Powerful is currently in theaters, and it has given Sam Raimi the biggest non-Spider-Man success of his career. Unfortunately, it's not really a Sam Raimi movie after the first 10 or 15 minutes. So here are the essential movies in Raimi's filmography, so beginners know where to start and diehard fans are reminded that they want to watch all of these again.

1. The Evil Dead (1981) - Sam Raimi's calling card to the world remains one of his best movies. The low-budget nature of this "cabin in the woods" movie -- one of only two pure horror movies in his filmography -- means there's a whole lot of ingenuity and creativity on display, while the fact that Raimi was using the movie to get some attention means he literally throws in every single thing he can think of or do. Modern audiences might have a tough time looking past the low-fi special effects, which is too bad, as it's still one of the most grueling and relentless horror movies ever made. Better yet, it manages to be those things without losing a sense of fun, something that can be said about nearly every Sam Raimi movie.

2. Evil Dead 2: Dead by Dawn (1987) - Raimi made one movie in between the first two Evil Deads (Crimewave in 1985), and it was a horrible, soul-crushing experience for him that he has since basically disowned. It's no surprise that returned to the familiar, delivering a sequel that's more of a remake -- a chance for him to do the same material on a bigger budget and with a different approach. Whereas The Evil Dead is grisly and genuinely scary, Evil Dead 2 ups the "fun" quotient considerably and is alternately bloody and funny -- Raimi pretty much invented "splatstick" here. It's not necessarily a better movie than the original, just a different one, and both worth like gangbusters on their intended levels. A whole lot of what Raimi would spend the rest of his career doing finds its genesis here. 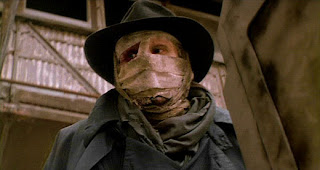 3. Darkman (1990) - Raimi's major studio debut combines many of the things the filmmaker loves -- old monster movies, film noir and comic books -- into one tight little package. This dark superhero movie, featuring Liam Neeson as a scientist who's left for dead and becomes a superhero, was hurt by being released in the wake of Batman, because a) audiences weren't familiar with the character of Darkman (because Sam Raimi MADE HIM UP!) and because they didn't know what to make of Raimi's directorial flourishes. He did not water his style down AT ALL, and the movie is the better for it. This is another of the director's work that had done better with age, when audience's sensibilities finally caught up with what he was doing.

4. Army of Darkness (1992) - The third installment in Raimi's Evil Dead trilogy brings Ash up to the majors, thanks to the backing of Universal Studios and a wide release. Not surprisingly, it pretty much sank at the box office, because no one knew what to make of it or even that it was the third movie in a series. It takes the series in a totally different direction, ditching the splatter in favor of more old-school adventure (the movie is practically a love letter to Ray Harryhausen) and being the most overtly comedic of the series. Like most of Raimi's movies, time has been very good to Army of Darkness, which became such a cult phenomenon on video and DVD (possibly because Anchor Bay put out a new version every other month) that many young film fans continue to name it as one of their all-time favorites. Raimi later remade the movie -- with a much, much higher budget and huge box office success -- as Oz the Great and Powerful.

5. The Quick and the Dead (1995) - Raimi continued to struggle in the '90s, making smaller genre movies that no one really saw but which would all go on to become cult movies. Though it's mostly just an exercise in style (a tribute to the Italian westerns of the 1960s), The Quick and the Dead is one of the few good westerns to come out of the 1990s -- especially because it's not the kind of meditative, deconstructionist western we had come to expect in that decade (thank you, Unforgiven). The movie celebrates being a western. Leonardo DiCaprio and Russell Crowe were barely-knowns at the time, and there's a killer cast of character actors including Pat Hingle, Keith David, Lance Henriksen, Mark Boone Junior, Tobin Bell and Roberts Blossom, plus a great villain turn by Gene Hackman. It's not one of Raimi's absolute best, but it's very entertaining and lets us see what a Sam Raimi western looks like. 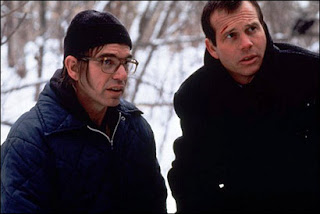 6. A Simple Plan (1998) - Here's where everything turned for Sam Raimi. After years of working in genre movies and making -- at best -- cult favorites, Raimi finally got some critical legitimacy with this film version of the novel by Scott Smith (who also scripted). The critics raved -- and rightfully so -- about this pitch-black neo-noir about a group of men who find a lot of money and the ways in which it eats at their souls. Great performances and a perfect sense of place (snowy Minnesota), coupled with some of Raimi's most controlled, least showy direction make this one of his best. Critics fell all over themselves to talk about how Raimi "grew up" with this one (often mentioning him in the same sentence as frequent collaborators and friends Joel and Ethan Coen) and acted somewhat surprised to discover that he's a great director. To which the rest of us responded "Um, no shit."

7. For Love of the Game (1999) - This is one of Raimi's worst movies, even though it's not that bad. It's on the list because it's a key moment in his evolution as a filmmaker and critical in understanding the trajectory of his career. A Simple Plan brought Raimi critical acclaim and made him a "grown up" filmmaker in the eyes of the studios, so Universal gave him a shot at directing their $50 million baseball drama For Love of the Game. The movie is fine -- it's sappy and overly long, but certainly inoffensive -- and is only one of Raimi's worst because it feels like he sold out. There are no real traces of him as a filmmaker on display. It's not just the lack of any crazy camerawork, which would have felt self-conscious and wrong for the movie. It's that, for really the first time (Crimewave doesn't count), it doesn't feel like Raimi loves what he's doing. There's no sign of his enthusiasm; it just feels like generic studio product.

8. Spider-Man (2002) - For all of its flaws, For Love the Game should be recognized for proving that Raimi could handle a big-budget studio movie and serving as his audition for Spider-Man. This was the moment that the Sam Raimi aesthetic finally matched up with a commercial aesthetic, and he was rewarded with massive box office success for the first time ever (like, so massive that it basically spawned a decade's worth of comic book movies). On a script level, the first Spider-Man is still a big mess, but, in the words of the great Film Crit Hulk, the movie works in the way it needs to work. Raimi obviously loves and understands the character of Spider-Man, and his movie gets right at the heart of what makes the character special. Both comic book movies and summer blockbusters have come a long way since 2002, but few that are as affectionately made as this one. 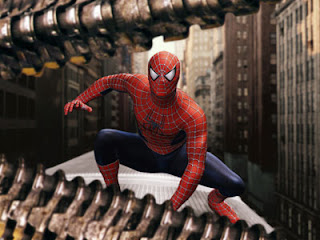 9. Spider-Man 2 (2004) - It may seem disappointing that HALF of this list is made up of either Evil Dead movies or Spider-Man movies, because Raimi has made other original movies worth mentioning, but each one finds him at a different point in his evolution and tells us something new about him as a filmmaker. By Spider-Man 2 -- still the best superhero movie ever made -- Raimi had worked out all the rough spots of the original movie and was at the absolute height of his abilities. It's his most confidently made film, combining the crazy energy of his early movies, the character study of A Simple Plan, the relationship drama of For Love the Game (which he gets right this time) and the comic book scope of Darkman. It's like a combination of Sam Raimi's Greatest Hits, but this time every single aspect clicks into place. This is as close to a perfect movie as Raimi has ever made.

10. Drag Me to Hell (2009) - After the frustrating experience and bloated disappointment of Spider-Man 3, Sam Raimi went back to basics and made his most balls-out horror movie since the original Evil Dead nearly 20 years prior. It's PG-13, no less! And, like all of his best genre efforts in the '80s and '90s, no one went to see it. It's amazing that audiences are only interested in Sam Raimi doing big blockbusters, since those movies sometimes swallow up everything that's interesting about him. It's the small to medium-sized movies like Drag Me To Hell that find him at his best.
Posted by Patrick Bromley at 7:51 AM