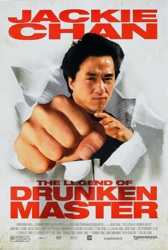 Jackie Chan is an international treasure.

There is no performer in the history of movies that combines slapstick, kinetic action, and charisma; partly because when would it have ever made sense for a martial artist to look to Buster Keaton as a source of inspiration? Whether he is successful or not in his Keaton imitation is a topic for another day (I think he’s great, by the way), but, if nothing else, Chan must be credited for originality in thinking. Who would think to make martial arts something... funny? But here we are.

Chan made The Legend of Drunken Master (released in 1994 under the title Drunken Master II) as a non-related follow-up to 1978's Drunken Master. The most important through-line for both films is the introduction of "drunken boxing" into movies: a series of feints, leans, and unorthodox punches and kicks which imitate the motions of a drunkard, thus earning the name. In addition to the swaying, unpredictable movements, the drunken boxer also becomes more powerful when actually drunk, since inebriation only makes the drunken boxer more powerful in his swings and less susceptible to pain. Which is what I've ALWAYS said. Think the Hulk, or probably closer, Popeye and his spinach.

In addition to being a super-cool looking style of martial arts, drunken boxing also ends up being the perfect vehicle for Chan's brand of physical humor. Nobody sells a reaction or dodges perilous danger better than Chan; he’d be perfect for the pantomime of American professional wrestling, if it went about 10,000 times faster. Everybody has heard of the death-courting physical stunts that Chan and his team regularly choreograph, but it’s not just the big show pieces, but the small touches that make his performances so fun to watch. Early in the movie, Chan’s character (Wong Fei Hung) has to defend his mother (played by Anita Mui, in the only comedy aside from Chan’s that works in the movie) from a band of thugs. He’s having difficulty defeating them, so his mother decides to toss him bottles of alcohol for him to drink during the fight, and the way he maneuvers himself to dodge his opponents’ strikes while still taking swigs from the alcohol is just as entertaining; it’s like watching two movies at once, because you have the bewildered bad guys trying their best to hit him, and then there is Chan, just. Trying to. Get a grip. On that damn. Bottle! 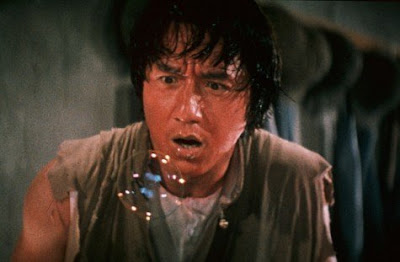 The physical comedy works great because it adds another dimension to the action that isn’t necessarily fighting-based. It’s not an injury during a fight that the protagonist has to overcome, but some side “business” that ups the stakes of the action. And this may be strange to say, but it makes the martial arts seem less “martial-artsy.” There is less of that pose-holding, you-killed-my-master stare-down that you often see in other films. I don’t point that out to criticize the poses or the stares but to say that the absence of those is indicative of Chan’s desire to try new and different things. Chan’s action (in this movie, but in most of his films) tend to be about the choreography of the actors and their adaptation to their environment; you don’t see a lot of blood flying or bruises forming, because it’s not about the physical beating of the opponent. You do see a lot of found items becoming weapons and guys breaking through furniture and glass emphasizing the hyperactivity of the action, which is beautifully illustrated in the Axe Gang fight in the middle of the movie, where Chan and a compatriot have to escape from 100 guys with axes from inside a restaurant. It’s not about beating every one of the bad guys; just getting out is good enough.

Which isn’t to say that Chan is light on the martial arts; he is awesome at it. The final showdown takes place in a steel factory (which bears too similar a resemblance to JB’s observation of the ubiquitous Factory that Produces Sparks in movies), where Wong Fei Hung confronts a villainous faction who plan to sell ancient Chinese historical artifacts. Chan, as Wong Fei Hung, is dressed in traditional Chinese clothing, while the henchmen he battles are very conspicuously dressed in Western suits and ties to delineate the natives from the foreigners.

The ultimate villain in this movie is John, played by Ken Lo, who in real life was Jackie Chan’s bodyguard. However, when I first watched Legend of Drunken Master in college, my buddies and I didn’t know that; we just called the bad guy Buttman. We called him that based on the reasoning that his butt muscles must have been developed to superhuman levels to deliver the volume of kicks in this final fight (“I bet he can go to the bathroom really quickly” was a side observation that met with lots of approving nods). Watch a clip of this fight; at least 90% of the time, Ken Lo is on one leg, coming at Jackie Chan with a blinding flurry of sidekicks. Unlike lots of traditional martials arts films, the tempo of this fight is blisteringly fast, and to my (untrained) eye, it doesn’t look like the film has been sped up much, there is no wirework for the jumps, and there is little “power powder”; Chan took over the directing for the final fight sequence, and he places the camera to best effect to anticipate the movement. It’s a terrific example of what makes Chan so good; it’s unorthodox, funny, quick, full of practical effects, and crafted by someone with an eye for entertaining an audience. He loves to entertain, and he works hard to do so; when he crawls through a bed of live embers during this fight, he did three takes to make sure he got what he wanted. Not bad for someone who was 40 when he made the movie. 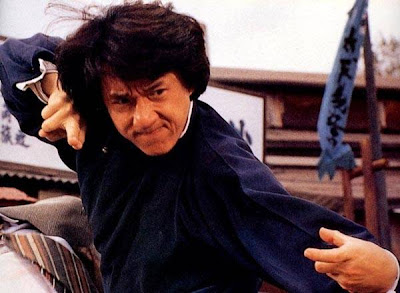 As for available copies of the movie, there is no version that combines the original aspect ratio, the original cut, and Cantonese language track all into one, which seems sort of preposterous in this day and age of Blu-ray goodies. I watched it on the Blu-ray released in 2009 by Miramax, which is unfortunately dubbed in English, and whose audio soundtrack doesn’t always match up with the punches on screen, and could potentially be very distracting. I love Jackie Chan as much as anybody, but I don’t need to listen to him speak English, especially in a Chinese movie. Somebody please dig up that Cantonese track!

The Legend of Drunken Master will stand as one of the most unique creations in martial arts movie history, a perfect example of the combination of qualities that makes him a singular performer. I’m hopeful that some new action star, like Dwayne Johnson or Stephen Chow (although neither of them will stack up to Chan’s kung fu prowess) will take up the action + sense of humor mantle that has been Jackie Chan’s for decades.
Posted by Patrick Bromley at 7:33 AM