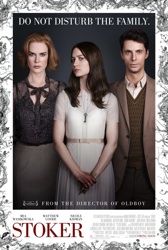 Stoker is well worth seeing, but in a way that is hard to describe. It’s at times really strong and laughably bad at others. I saw the movie a couple of days ago and I am still trying to process my feelings towards it. The good news is that the more I think about Stoker, the more I like it.

If for no other reason, you should see Stoker because it is the English-language debut of the very talented Korean director Park Chan-Wook (Oldboy, Lady Vengeance, Thirst). Stoker is not his best, but it might be closer to his best than I initially thought. His style is not neutered at all. It is the first solid pure horror movie of 2013. 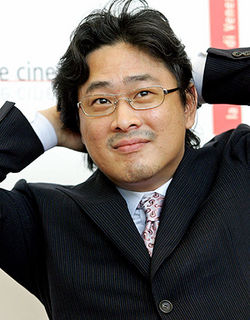 The plot of the movie is relatively straightforward. India Stoker (Mia Wasikowska) is an 18-year old outcast that lives on an estate with her newly widowed mother Evelyn (Nicole Kidman, who finally entertained me again with this performance,…HIP…HOP..HOORAY…Doc Hollywood invoice is in the mail!). India and Evelyn are visited by India’s mysterious Uncle Charlie (played by Matthew Goode). Charlie insinuates himself with the two women easily, as Evelyn is hot-to-trot for her late husband’s brother and India appreciates the attention Charlie dotes on her. Jealousy and mayhem ensue.

A basic plot description might make the movie sound like an erotic thriller, but it’s not that at all. Oddly enough, the closest thing it feels like to me is the rare horror remake where they get everything right! It’s a revisionist Addams Family. Unlike a lot of movies of late, Stoker takes the time to let the story unfold so that it plays as if these characters had lives before we caught up with them. What you are witnessing in the movie is a pot that has been boiling for a long time, and we’re here to watch it overflow.

It is the type of movie where you try to guess where it is going, and you are often wrong. The turns this movie begins to take about mid-way through (starting with a shower scene) get progressively weirder and more unsettling, but also more interesting.

Chan-Wook describes Stoker as “a nightmare one dreams after reading a fairy tale,” to which I cough ‘douchebag’ into my hand. That’s the type of thing you say when you have glasses on.

Phrasing issues aside, I will agree with him that there are many fairy tale signifiers in the movie – the ‘castle,’ the ‘wicked queen,’ the ‘threatened heroine,’ and the ‘handsome knight.’ The movie subverts almost all of these elements -- except maybe the castle, which is OK because I don’t give a damn about castles unless they’re enchanted and have pizza and games.

I like Chan-Wook’s other description of the movie better, where he describes it as a coming of age story for India Stoker. To avoid spoilers, I won’t go into much more detail except to say Stoker flips that convention on its head, too. Man, this movie is tough to talk about without spoilers!

Stoker has some flaws, though. In fact, I was having a lot of problems with the first half. Because Uncle Charlie is meant to have dark layers hidden beneath the surface, Matthew Goode is too obvious of a casting choice. He seems snake-like and sort of predatory from the beginning, so the only surprise is to learn to what extent he is messed up. Goode underlines the sinister elements too much.
The art direction is way over-the-top and laughable until you settle into the movie. I was having issues with things like the house being this immaculate jewel, but it has a dark SCAAAAARRRRRYYYYY basement full of spider webs. It’s what’s beneath the surface! Get it? “Oh yeah! I’m so Lynch right now,” said Chan-Wook to himself.

The dialogue is also sort of pedestrian, and everyone speaks very slowly. Like, Unbreakable slow. They could have shaved ten minutes off the movie if the characters spoke normally. Lastly, there are a few too many scenes of India being picked on by the ‘bros’ at her high school. I’ve been around a lot of ‘bros’ in my life (I was in a fraternity, remember), and these are poorly written bros. Maybe this is what Korean bros sound like, but if you’re gonna make a movie with U.S. bros, you better consult with a U.S. bro who has an ear for brocabulary. Station.

Mia Wasikowska’s performance is hard to process at first. Immediately after the movie, I texted a friend of mine about it and said I thought the lead was miscast and one-note. I felt she played the role in the most obvious way possible. And then I thought about it some more, and I came to another conclusion. For the journey this character ends up on, her demeanor and interactions make a hell of a lot of sense. I missed the point! 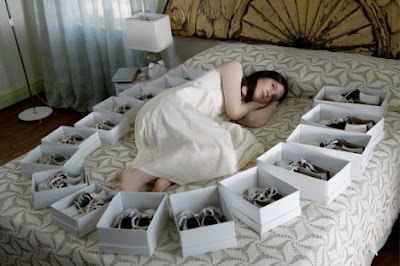 I’m eager to go back and watch Stoker again now that I’ve put its pieces together. The first half will benefit greatly from being informed of the movie’s eventual endgame. The second half, even on the first viewing, is effectively tense and crazy.

Isn’t that cool? In an era where most movies are weightless, Park Chan-Wook made a movie that will probably benefit from repeat viewings, analysis and conversation. I commend that.
Posted by Patrick Bromley at 7:31 AM