It Came from the '80s: Hell Comes to Frogtown 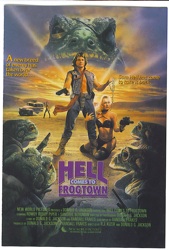 It's never easy to make a cult film on purpose.

Cult movies are not made by directors. They are made by audiences. No one can say what movie will find a following, and trying to manufacture a cult film by playing up the aspects that have made for successful cult films in the past is the height of cynicism.


1987's Hell Comes to Frogtown seems like exactly the kind of movie that has been prefabricated for a cult audience, from the casting of wrestler "Rowdy" Roddy Piper to the presence of mutant frogs to the post-apocalyptic setting to the tone, which is just the right side of campy and self-aware. What saves it from being too calculated and cynical is that it plays the material straight. The movie pre-dates the Age of Irony, so there's no evidence of the filmmakers or the actors winking at the camera. They understand that there are enough absurd elements in the movie -- from the title on down -- that they don't really need to call attention to it. Drawing inspiration from old-fashioned serials, spaghetti westerns and early-'80s science fiction, Frogtown is one of the few post-modern genre efforts of the '80s. Its use of pastiche is as much a commentary on the kinds of movies the decade produced as it is a straightforward genre effort.

"Rowdy" Roddy Piper plays the excellently-named Sam Hell, one of the few fertile men living in a post-apocalyptic wasteland. He is captured by a band of nurses, who plan to use him to impregnate a group of fertile women they have collected -- trouble is, those women have been kidnapped and taken to Frogtown, populated by giant mutant amphibians. Hell is tasked with sneaking in to Frogtown and rescuing the women; to ensure he follows orders, he is fitted with a kind of chastity belt device that's controlled via remote and delivers electric shocks when he tries to escape or acts defiant. Controlling the codpiece is Nurse Spangle (Sandahl Bergman), who accompanies Hell on his mission by posing as his sex slave. 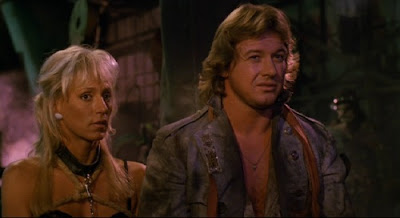 There's a lot of kinky shit in Hell Comes to Frogtown, which isn't really a surprise being that the whole premise is rooted in the main character fucking as many women as possible FOR THE GOOD OF MANKIND. The electronic codpiece is a clever addition, because it's the kind of thing that sticks in your head -- you remember that aspect even if you forget most of the movie ("Isn't that the movie where Roddy Piper gets his balls shocked?"). Former dancer and Golden Globe winner (!) Sandahl Bergman gets to do multiple stripteases and seduction dances, none more memorable than the completely fucked up "Dance of the Three Snakes" she performs for the Frog Commander. The movie's take on sexuality is in keeping with its 13-year old sensibilities, like a Heavy Metal comic come to life.

To say that Hell Comes to Frogtown plays the material straight is not to say that it is humorless. To the film's benefit, everyone is very aware of the movie they are making. Piper is overly broad at times -- he was used to better effect as the mostly-silent John Nada in John Carpenter's They Live -- but that's just a result of his limited abilities and the truth that wrestling acting doesn't always play well on camera. Sandahl Bergman is the movie's MVP, fully committing to being nerdy, being sexy and having to do some really, really weird shit. Both actors capture the tone of the movie in their performances, though, letting the audience know that they're having fun without trying to distance themselves from the material with a lot of "air quote" acting. But the self-awareness extends beyond just the performances: there's a cute sight gag early on, for example, that acknowledges the debt the movie owes to Planet of the Apes, while also being a meta joke about the low budget and lack of resources.

The movie was originated and developed by screenwriter Randall Frakes and director Donald G. Jackson, though the latter would eventually have to share directorial duties with R.J. Kizer, a sound editor whose only previous directing credit was the U.S. footage shoehorned in to Godzilla 1985. The presence of a more "experienced" director -- one who was sanctioned by Roger Corman's New World Pictures -- gave Jackson a bunch more money to work with, as well as the promise of making a 35mm feature that would be released in theaters (as opposed to the 16mm DTV movie it was originally intended to be). Without knowing much more of the back story on the "dual director" situation, I can say that the bigger budget helps; though it still feels generally cheap, the film benefits greatly from some good production design and effect frog suits. Trying to accomplish what the filmmakers pull off on a considerably smaller scale would have made the movie insufferable -- that its execution matches its ambition (more or less) makes the material much more palatable. 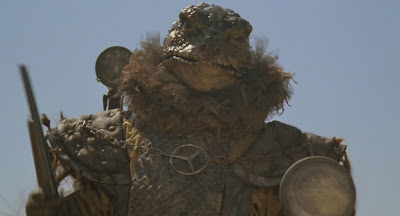 My first exposure to Hell Comes to Frogtown came courtesy of the late, great USA Up All Night, which would show B-movies all night Friday and Saturday (it's the same show that cultivated my love of Troma). Desperate to watch the movie as an enormous fan of Roddy Piper (all I knew was the great title and the fact that he was in it), it took me multiple attempts to actually see the movie as a kid -- it was such a terrible feeling to try and fight to stay awake until 2 a.m., only to wake up early the next morning and realize I had missed yet another showing of Hell Comes to Frogtown. These kids today with their DVRs will never know that kind of disappointment. It was a Holy Grail for me for a short time, which no doubt affected the impact the movie had on my psyche. It casts a shadow because it existed for so long in my mind before I ever saw it.

Unlike a lot of the '80s genre movies I've revisited for this column, my feelings on Hell Comes to Frogtown are basically the same as they were when I was 11. That's because the movie is pretty much pitched at adolescent boys, who are just beginning to fantasize about sex and may look up to a hero who has to sleep with every woman on the planet, or who are still enough in touch with their kids selves to find apocalyptic wastelands and mutant frogs cool. The reason I still like it as much as I did at 11 is because I still think wastelands and mutant frogs are cool. If anything, I can now appreciate the unique sophistication of the movie, which seems to actively stack the deck against itself (ludicrous premise, silly title, pro wrestler in the lead) but manages to be something special by embracing those very elements that could have sabotaged it.

A sequel, Return to Frogtown, was released direct to video in 1993. Though Jackson was once again in the director's chair, none of the original cast returned. Robert Z'Dar's jaw took over as Sam Hell, opposite Lou Ferrigno (playing a new character). I still have never seen it, probably because it doesn't have Roddy Piper, but also because I'm almost positive Hell Comes to Frogtown already said everything I need to hear on the subject. What the original movie accomplishes isn't easy. It carves out its own unique space in a decade full of genre movies from which it could have been indistinguishable. Sure, it gets a leg up by being show off-y to begin with, but that alone does not a memorable movie experience make. Just look at Snakes on a Plane.

Got a movie you want to see covered in "It Came From the '80s?" Let us know in the comments below!
Posted by Patrick Bromley at 12:11 PM