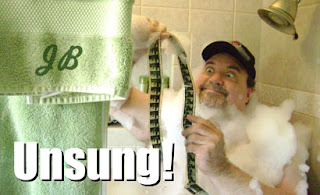 THE PLOT IN BRIEF: In 1966, Dieter Dengler (no, not Dirk Diggler, Dieter Dengler) flies bombing missions over Laos. Dieter (played by Christian Bale) loves to fly and it shows, but one day he is shot down over enemy territory. He is captured and placed in a horrible Laotian prison camp where the prisoners are dragged by water buffaloes over rough terrain and given insects to eat. Dieter and two other prisoners, Duane and Gene (Steve Zahn and Jeremy Davies) attempt a daring escape… a “Rescue Dawn,” if you will. 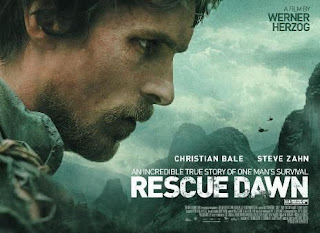 CONFESSION: I love Werner Herzog movies. I first saw Aquirre: The Wrath of God in a cinema class in college and it floored me. I later tracked down The Enigma of Kaspar Hauser, Stroszek, Herzog’s remake of Nosferatu, Fitzcarraldo, My Best Fiend, and Grizzly Man on my own. His Cave of Forgotten Dreams was one of my favorite films of 2010—in 3D!

Many years ago, I taught an adult education “after hours” class (that sounds like something they show on Cinemax at 3AM!) in foreign films. We screened a different foreign masterpiece every week, and then I moderated an hour-long discussion. My “students” were mostly older married couples who were film buffs and looking for something to do on Wednesday nights to fill their empty lives since they had all stopped having sex decades ago.

One couple seemed like they were still having sex. A lot of sex. (Shudder.)

Aquirre was, hands down, the group’s favorite film, and I still remember our delightful discussion after the screening. This is one measure by which my lovely wife and I judge new movies: how long and involved is our discussion of it after the film is over? Good movies inspire long conversations; bad movies take away some of your precious time left on the planet.

Speaking of having lots to talk about, Herzog still holds the record as the guest with the longest post-screening Q & A in the history of Ebertfest. (R.I.P. Roger). After the screening, he proved so fascinating a raconteur that the audience stayed in the theatre listening to his stories until well after 3 AM.

My first experience seeing Rescue Dawn testifies to the power of Going In Knowing Nothing Of The Film and With No Preconceived Ideas or Expectations (GIK-NOT-FAWN-PIE—Patrick, Glossary entry!) I cannot recommend this strategy enough. Some of my best movie-going experiences involved walking in knowing nothing (1977’s Sorcerer comes to mind) and being blown away. Interestingly enough, our esteemed colleague Adam Riske will debate this very point in his column this week. Watch for it. The young man has a future.

Two main attractions in Rescue Dawn are the performances of Christian Bale and Steve Zahn. I am a big fan of Christian Bale (“Good for YOU!” I already hear someone shout) and an even bigger fan of Steve Zahn. Zahn has delivered so many comic performances that it is enlightening to see one of his dramatic turns. In Rescue Dawn (as well as the excellent Shattered Glass) Zahn proves himself to be a capable and compelling dramatic performer.

Another quality of the film that shines is its offhand, non-studied REAL realism. Most Hollywood films feature a fake “Hollywood realism” to which viewers have grown accustomed. Hollywood films use techniques like invisible editing (which hides its own existence by masking cuts and avoiding jarring changes in POV) and color correction (to smooth visual transitions, even between shots filmed on different days) to fool us into thinking that what is happening on the screen is “life,” not “acting.” Many moviegoers forget that realism is a style—but it is not the only style. Except for the questionable physics in most action movies and the patent absurdity of cartoons, musicals, and comedies, American audiences like their films “real.” Hollywood makes it very easy for all of us to suspend our disbelief. One of Rescue Dawn’s triumphs is that a viewer could mistake it for a documentary. Herzog did not simulate a plane crash; he crashed a real plane. 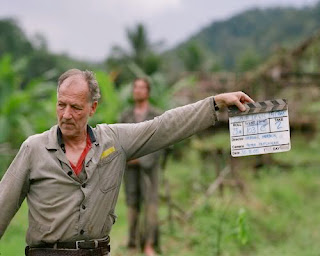 Les Blank’s documentary, Burden of Dreams, details the filming of Fitzcarraldo. It is a “must see.” We learn that Klaus Kinski, who plays Fitzcarraldo, was so difficult on the set that local Indians came to Herzog with an offer to kill Kinski . “I needed Kinski for a few more shots, so I turned them down,” explains Herzog in the film. “ I have always regretted that I lost that opportunity.”

The glorious nature photography in Rescue Dawn comes courtesy of the great Director of Photography, Pete Zeitlinger, who also photographed the Herzog movies Cave of Forgotten Dreams, Grizzly Man, Bad Lieutenant: Port of Call New Orleans, My Best Fiend, and Little Dieter Needs to Fly. Zeitlinger achieves a difficult balancing act in Rescue Dawn, giving us jungles and rain forests that are at once stunning and dangerous.

CAVEAT: The film includes some odd, stilted dialogue that takes a while to get used to. At times it seems like Herzog’s unique speech patterns had somehow been transcribed word for word. An example:


Dieter
I remember, I was in the attic with my brother. We were looking out, and we see this fighter plane, beautiful, coming right at us. And it's firing from its wings. And I see the machine gun, it's flashing and - whooosh - it goes flying past the house. It's so close. I mean, it's feet away from the house. And the canopy was open. And this pilot, he had his goggles up on his helmet. And I could see his eyes. And he was looking at me. Right at me. He's looking right at me. And then as he turns to go, he's starting back, he's looking right at me still. And the thing is, from that moment on, little Dieter, he needed to fly.

MASSIVE TANGENT: Has anyone else noticed just how many movies on IMDB get about a 7 on their rating scale? It doesn’t matter if it is a recognized classic or a certified flop. The positives average out the negatives = 7!

It is as if all the armchair critics at IMDb were teachers who decided to forego the rigorous job of grading by just awarding every student essay a B-. In the words of Daffy Duck, “Thanks for the sour persimmons, Buster.”

Could I have just spent the last year of my life actually championing MEDIOCRE films? Cue the Twilight Zone Theme.

Apparently, Rescue Dawn ran into trouble when the family members of the real Gene claimed that the film fictionalized events to the detriment of Gene’s memory. Gene’s brother created a website critical of Herzog and the film, claiming that the “Gene” Jeremy Davies portrays in the film is not the Gene they all knew and loved, and that Dengler had nothing to do with formulating the elaborate escape plan.

Nine years BEFORE directing Rescue Dawn, Herzog wrote and directed a documentary featuring the real Dieter Dengler titled Little Dieter Needs To Fly (a film I also recommend.) Gene’s family had no objection to the documentary. I guess in that ensuing nine years they forgot that there is a difference between testimony and drama.

What more recommendation do you need? Rescue Dawn is a forgotten film by a great director, features a dynamic performance by a very popular actor, engages the audience in a way few Hollywood films ever do, and features a compelling plot and magnificent cinematography. The legal trouble and threats of a possible lawsuit are merely a bonus. Rush right out and see it; do not allow yourself to be captured by crazy, syphilitic Laotians!

Rescue Dawn is available on DVD (Amazon.com is currently selling it for a little more than eight dollars) and for rent or purchase on both iTunes and Amazon Instant Video. No one (besides me) at F This Movie! has ever seen this film. This is your chance to trump the bastards! See it now and comment below!
Posted by Patrick Bromley at 7:40 AM