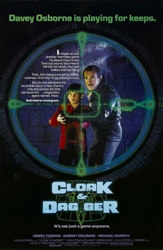 Video games, imaginary friends, old ladies with missing fingers. It must be a kids' movie from the '80s.

There is a sub-genre of movie that was very popular in the '80s: the Kids in Jeopardy Movie, in which real kids (not cartoons) find themselves in real danger at the hands of some real bad guys. Maybe that's why they made such a lasting impression on us '80s kids -- like many of the decade's genre efforts, they are kind of scary without being too scary or talking down to us. Think about Poltergeist or The Goonies or The Monster Squad or Lady in White or any number of the decade's genre movies: they all center on kids being put into danger, and while we're pretty sure they won't be seriously hurt or even killed, that threat looms over us for the entire film.

Cloak & Dagger is one of those movies.

Henry Thomas, fresh off of E.T., plays Davey, an imaginative 11-year old boy living with his widower father (Dabney Coleman in the first of two roles) in suburban Texas. Davey spends his days lost in a fantasy world of espionage, playing his favorite role playing/video game Cloak & Dagger and following the adventures of its hero, Jack Flack (also Coleman), who becomes Davey's imaginary friend. Davey witnesses a murder, but not before the victim can hand him a game cartridge he says contains important military secrets and must be brought to the FBI. Trouble is nobody believes Davey -- nobody but his one real life friend Kim (Christina Nigra), who seems to tolerate Davey more than believe him. As Davey is chased by murderous spies who want to get their hands on the Cloak & Dagger cartridge, he turns to the only man he can depend on -- Jack Flack -- to keep him out of trouble and keep him alive. 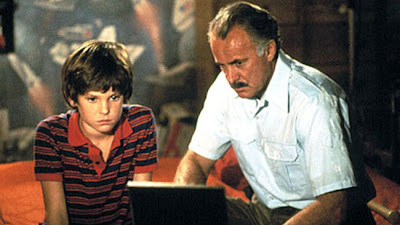 As if you couldn't tell from the plot description, what Cloak & Dagger basically amounts to is Hitchcock for kids, only with a fantasy element that puts it squarely in the Decade of Genre. Screenwriter Tom Holland and director Richard Franklin (who two years earlier collaborated on the excellent Psycho II) clearly want to make a Hitchcock movie, but someone must have reminded them that a straightforward espionage thriller wasn't going to cut it for an '80s movie directed at young audiences. Enter Invisible Dabney Coleman as imaginary friend Jack Flack and you've got yourself a fantasy movie. Coleman is terrific in the movie; if Henry Thomas wasn't such a talented kid actor (seriously, is there anything more moving than Elliot crying at the end of E.T.?), Coleman would be the whole show. He appears to be having a really good time playing Jack Flack.

Cloak & Dagger was on the short list of movies that was in heavy rotation among my siblings and I during the mid-'80s (also on the list: Time Bandits, Ice Pirates, Girls Just Wanna Have Fun, Better Off Dead and The Beastmaster, among others). I'm not really sure what the attraction was; I know that I liked the idea of having an imaginary friend with whom I could have adventures, and I'm sure that because parts of the movie freaked me out, returning to it over and over was a way to try and master that fear. 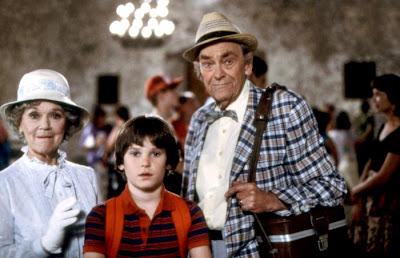 The movie doesn't really hold up to The Goonies Derivation, in which a once-beloved movie is seen years later with different eyes and may not prove to be as magical as we once believed. My memory was that it was a movie about a boy and his imaginary friend doing cool spy shit, but Jack Flack really isn't in it all that much.The majority of the movie consists of Henry Thomas being chased around town in sequences that aren't particularly suspenseful or inventive -- it starts and ends strong (once the scary old couple is introduced, the movie comes back to life), but the middle is a big drag. Cloak & Dagger functions like it's enough to be a movie about a kid on a spy adventure, forgetting that it needs to be a fun movie about a kid on a spy adventure.

And, yet, there are elements of the movie that will forever be burned into my brain: Jack Flack walking out of the fire. Davey stomping on his action figure. The nice elderly couple who turn out to be evil spies. The old lady with only four fingers. The chloroform. (Those last three are kind of the same thing.) Cloak & Dagger makes an impact on young viewers because it presents the world as a dangerous place. Grown men try to shoot Davey -- and not, like, Scooby-Doo shoot. Like actually fire a gun at and kill an 11-year old boy. To defend himself, Davey has to shoot and kill people. Sure, he's sort of tricked into it (dick move, Jack Flack), but the end result is the same: a kid kills a bad guy. Because it was the '80s, filmmakers could actually see this sort of thing through.

Cloak & Dagger suggests in its finale that it's really about the healing of a father/son relationship. The last scene certainly is, as Davey's father replaces Jack Flack as his hero while they hug in slow motion and Davey yells out "Dad, you have essentially replaced Jack Flack as my hero and things are going to be different from here on out!" (I am paraphrasing.) But it would be tough to argue that the whole film backs up such a theme. For most of its running time, it's just a chase movie, and not always a very interesting one. The stuff at the end about a reunion between father and son is nice (though it's yet another of the decade's offerings that presents a kid with a vivid imagination and then insists he or she has to ignore that and GROW UP; see also: Labyrinth), but hardly earned. Yes, Davey has newfound respect for his dad because he was willing to sacrifice his own life and leave his only son an ORPHAN to keep him safe. He should also respect the fact that his dad can WALK THROUGH FIRE, because that shit is cool. But does Davey's dad really understand him any better now? Just because Davey happened to be telling the truth about this one fluke conspiracy doesn't change the fact that he and his son are fundamentally different. Or are we to believe that Davey is going to give up his games and imagination because this experience with real danger has turned him off to pretend danger? I guess that makes sense. But what does that mean -- that he's going to turn to something boring and safe like SPORTS? I don't want to watch a movie in which a kid goes on a crazy adventure only to be turned on to sports at the end. 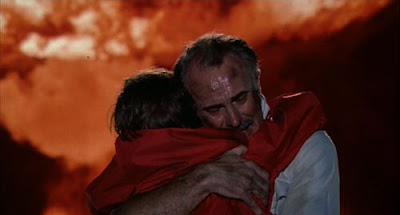 I have a complicated relationship with my own father, and, in theory, the last few minutes of this movie should just wreck me. They don't. Like I said, Henry Thomas's crying face is the most effective thing ever (that kid from The Sixth Sense can get fucked), but their reunion feels strangely weightless. Perhaps it's because Richard Franklin lays it on waaaay too thick. I find myself much more moved by the scene in which Davey stomps on his Jack Flack figure, effectively killing off and saying goodbye to his imaginary friend. That scene made me so sad as a kid. I hated watching him have to give up his toy and turn his back on his childhood. I still do. What does it say about me that I'm bothered more by the thought of Davey saying goodbye to his imagination than by the thought of him saying goodbye to his own father?

Maybe this explains my love of movies. They're my Jack Flack, and I don't want to turn my back on them. I'd take them over just about anything else.

Cloak & Dagger was originally released only as a double feature with The Last Starfighter (a movie I love), which makes sense, since both movies are about characters who love their respective games (an arcade game in Starfighter, a role playing game [and video game] in Cloak & Dagger) and find themselves essentially living inside of one. While I think one holds up better than the other, that's a MONSTER double feature in 1984. Both movies use fantasy as a way of processing the real-life dangers of the world. Both movies make heroes out of geeks -- and not in a redemptive, "now he's not a geek but a hero" way. The characters save the day specifically because they are geeks. They are good at video games. They have spent hours strategizing and role playing and are capable of finding their way out of danger as a result. The movies don't judge them, for better or worse. They're smart, they're capable, but they function better inside the fantasy. As movie fans, don't we all?


Posted by Patrick Bromley at 1:00 PM