Review: To the Wonder 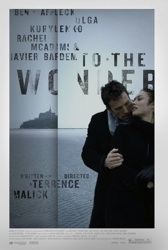 I want to be able to recommend Terrence Malick’s To the Wonder, but cannot in good conscience do that. Even if you are a fan, like me, prepare to be frustrated. Have you ever been sad and laid on the floor for five minutes (please say yes)? To the Wonder feels mostly like that.

The plot in brief: Neil (Ben Affleck) is an American traveling in Paris who meets and falls in love with Marina (Olga Kurylenko), a woman raising a 10-year old daughter. During their whirlwind romance, Neil invites the two ladies to move back to Oklahoma with him. They all go. In Oklahoma, Neil is some sort of an environmental inspector and Marina spends her time getting herself (and her daughter) acclimated to their new life in the US. After a while, their relationship deteriorates. Neil’s old girlfriend Jane (Rachel McAdams) then re-enters his life. In the B-story, a Catholic priest named Father Quintana (Javier Bardem) is having a crisis of faith. 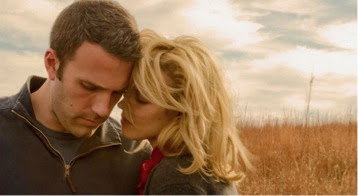 To the Wonder deals heavily with unrequited love. Actually, it’s more like unrequited devotion. The priest feels he’s not getting devotion back from G-D or Jesus; Marina is endlessly devoted to Neil, who is cold to her once the initial spark goes out. The problem with this is in its presentation. Whereas in The Tree of Life there are scenes involving dialogue that draw you into the drama, To the Wonder deals almost exclusively in breathless narration that almost always undercuts what you are seeing. A picture might be worth a thousand words, but a leaden chunk of narration can ruin the visual mystique.

The Tree of Life is a good place to start. It was my number two movie of 2011. The whole middle section of that movie (with the kids, Brad Pitt and Jessica Chastain) really got under my skin. I felt like I was uncomfortably a fly on the wall of this family’s life. To the Wonder should feel like that, but insteadfeels a lot more like the end of The Tree of Life, where you are up artist’s creek without a compass. I don’t know why Malick is so intent on alienating his audience in his movies. In the name of capital ART he is sacrificing what should be great drama.

Another movie To the Wonder reminds me of, to Malick’s detriment, is 2001: A Space Odyssey. To the Wonder deals with long stretches of gorgeous photography by Emmanuel Lubezki (who also was the cinematographer for Children of Men, Sleepy Hollow and The Tree of Life) and more relaxing classical music than you can shake a fist at. Just like in 2001: A Space Odyssey, there are no uninteresting shots in To the Wonder. In both cases, Kubrick and Malick want you to have an emotional experience first and an intellectual one second. The long stretches of music and images without plot progression are intentional, because they want you to feel first and then have extra time to bring your own thoughts to the movie. In 2001, this is exceptionally rewarding -- I’ll ponder existence, space, man’s place in the grand scheme of things, what happens to us after we die, etc. In To the Wonder I trail off and think things like "Does Terrence Malick think HE’S G-D?" (more on that later) and "I have no sympathy for Ben Affleck’s character -- "Boo hoo! Olga OMG Kuyrlenko loves me too much." 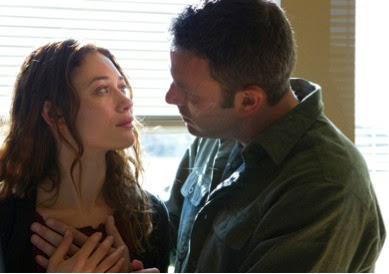 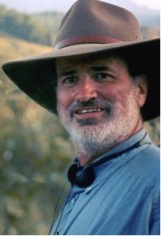 That sounds like a great story for a movie, but Malick messes it up in four ways. A) He doesn’t give enough time to the opening romance, so we don’t know why Neil loves Marina and vice versa. In fact, I don’t know why Neil loves anyone. He doesn’t seem too into the proceedings. More importantly, we rarely have any focused idea why the couple is fighting and unhappy. B) The story is told from the women’s point of view (Kurylenko and McAdams), which robs the story of the personal element. Malick should know how Affleck feels, but he treats him as a cipher while he pontificates what was going through the minds of the women he has romanced and C) The character Neil is obviously the Malick stand-in. The second story of the priest mirrors the romance, so it comes across as Javier Bardem and Olga Kurylenko are the women wondering why their "men" (G-D & Jesus/Ben Affleck & Terrence Malick) don’t love them like "she" loves "him." So Malick has made himself equal to G-D. 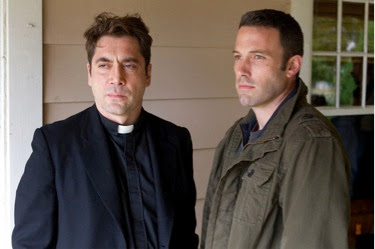 To the Wonder is available On Demand, on iTunes and in limited release in theaters.
Posted by Patrick Bromley at 7:35 AM