Review: Now You See Me 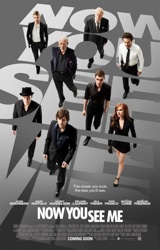 Now You See Me might have been a lot of fun if it wasn't so incredibly stupid.

Louis Leterrier's bank-robbing magician movie is, on its face, preposterous. That should be part of the fun. Instead, Leterrier takes a ridiculous premise and dumbs it down even further, wastes an amazing cast and directs the film into an overheated frenzy of swirling cameras, endless music and total fucking nonsense. This is the kind of movie that gives goofy fun a bad name.

Jesse Eisenberg, Isla Fisher, Woody Harrelson and James Franco's little brother are the Four Horsemen -- street magicians turned hugely successful Las Vegas performers who make a name for themselves by getting an audience member to rob a bank in Paris while still on stage. It's a neat trick, and it catches the attention of FBI agent Dylan Rhodes, just one of the many terrible names in a screenplay that includes a bunch: J. Daniel Atlas, Henley Reeves, Merritt McKinney, Alma Dray, and Jack Wilder among them. Anyway, Rhodes is played by Mark Ruffalo, who is partnered up with a French Interpol Agent (Mélanie Laurent of Inglourious Basterds) to take down the Four Horsemen as they continue to perform massive tricks that climax with them robbing some big corporation. Enter Thaddeus Bradley (See? Terrible.), played by Morgan Freeman, a former magician who now hosts TV specials in which he debunks tricks. Can he put an end to the Horsemen's streak? Is he working with them? Can Rhodes solve the case before they steal again? Can he trust his new partner? Are the Horsemen really magic? I don't care. 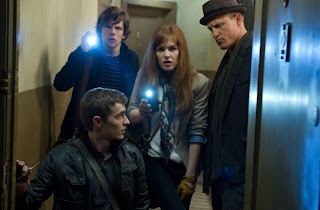 One of Now You See Me's many, many problems is that it doesn't know whose story to tell. It begins by following the Four Horsemen and showing how they formed, but then it's a movie about a cop who is trying to catch them. Or is it? The movie might have been better off making the Horsemen characters we only see and learn about through the other characters; I never thought I would say such a thing, but it might have benefited from more of the overused Rashomon structure, in which the story of the Horsemen is pieced together by those trying to figure out how they did it and why. It doesn't help that the motivations of the magicians make no sense -- there is some lip service as to why they are doing what they are doing, but even that requires a logical leap into the fantastic that the movie isn't even interested in acknowledging. It's hard to root for them when we don't even understand what it is they want.

But maybe we're not supposed to root for the Horsemen. Maybe the movie isn't about them at all. Maybe it's about a plucky French Interpol agent working her first big case in the U.S. Or maybe it's about a self-made celebrity out to debunk the Horsemen's magic. Or is it? The movie is so overstuffed and so determined to keep shifting and twisting that the audience can't ever get its bearings -- not because it's deliberately sophisticated, but because it is incompetent as a narrative. If you want to keep the audience guessing, you'd better make sure they give a shit what the answers are in the first place.

Despite the fantastic cast, nearly every actor in the movie gives one of the worst performances of his or her career. Morgan Freeman and Michael Caine are able to get by sleepwalking, while Jesse Eisenberg continues to prove that he needs the right role to be effective. Mélanie Laurent does her best, but most of her energy appears to be expended on trying to correctly pronounce all of the English words. Only Woody Harrelson makes it out unscathed, but that's because he's always Woody Harrelson. At his worst, he's still Woody Harrelson; at his best, he's incredible. Here he skates by appearing to not give a shit at all. It's the right choice. 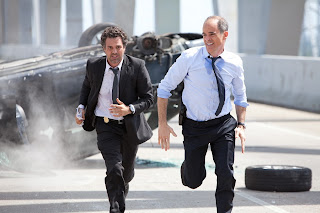 Suffering the worst are Isla Fisher, who is only a supporting role, and Mark Ruffalo, who basically has to carry the entire film. Fisher appears completely miscast -- she's too small both physically and personality-wise to be even remotely believable as someone who commands the Las Vegas stage, and her every line delivery sounds like she's embarrassed to be speaking. Maybe she is. She's terrible in the movie, but redeemed somewhat by the fact that she doesn't have to be in it that much. Mark Ruffalo doesn't have that luxury, giving what I believe is the first truly bad performance I've ever seen him give. He is done no favors by the character he is asked to play -- basically a cop who is a stupid asshole and is wrong in his every instinct and decision. It's as if Die Hard's Paul Gleason was asked to carry a movie. It does not work.

And then there is Leterrier, who began his career as the director of some entertaining nonsense but has graduated to a director of big Hollywood movies, for which he is ill-suited. He remains a filmmaker without much of a personal style, so instead he just continues to ape what better directors have done. In Now You See Me, he's clearly riffing on the Ocean's Eleven series but hasn't Steven Soderbergh's capacity for establishing tone. Leterrier jams the movie with a Bryan Tyler's fizzy horn score, hoping to bombard the audience into thinking the movie is light, breezy fun. But between the oppressiveness of the score and Leterrier's nonstop camera moves, few movies have ever worked this hard to feel like fun.

The screenplay, by talented writers like Ed Solomon (who wrote Men in Black) and Boaz Yakin (writer/director of last year's underrated Safe), is filled with clunky exposition -- a movie like this is bound to consist of a lot of characters explaining shit to each other -- and truly awful dialogue. These are characters who speak as if they know they are in a movie, and a hacky one at that. But the screenplay also gets a lot of the beats wrong. In a movie like this, it's expected that we suspend disbelief. I'm willing to accept that a group of street magicians could stage illusions on this gigantic scale. I cannot accept that a multimillionaire would use his first pet's name as the password to protect his fortune. We'll buy the broad strokes if you can get some of the details right. Now You See Me gets none of that. Of course, the film appears to have been messed with a great deal in post-production; there is a lot of clumsy ADR to make certain plot points clear and a famous character actor appears only in a newspaper photograph, suggesting that perhaps some flashback scenes got cut. Maybe there was a better movie in there somewhere. I have my doubts. 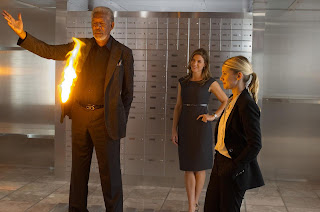 I'll say this for the movie: it isn't boring. It's too long, it makes little sense and talks down to the audience just about every chance it gets, but it certainly is lively -- perhaps too much so. It's a movie that's bad but not dull, and tests one's patience only because of the lengths it's willing to go to insult our intelligence. Now You See Me should have been an easy home run: a mix of a magic movie and a heist movie with a great cast and low expectations. How did they fuck this one up?
Posted by Patrick Bromley at 7:28 AM