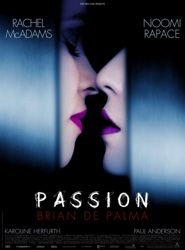 One is rarely indifferent towards Brian De Palma's thrillers; you either hate them or love them in spite of everyone hating them. Body Double is like that. Raising Cain is like that. The Black Dahlia is like that. Femme Fatale is like that. For so much of Passion's running time, I was hoping it was like that. I wanted to like it despite most critics panning it. The movie doesn't always make that easy.

Things start well enough, with a bunch of gorgeous, sterile establishing shots over the credits and a bouncy Pino Dinaggio score that suggests the movie is very aware of its own status as a thriller and intends to have fun with it. No one does that better than De Palma, and the realization that you're back in his hands creates an initial wave of giddiness. A new Brian De Palama thriller! Brilliant photography and carefully orchestrated set pieces? Shocking violence! Shameless eroticism! All the things I want from a movie!

Passion does have all of those things, but in wildly varying degrees. 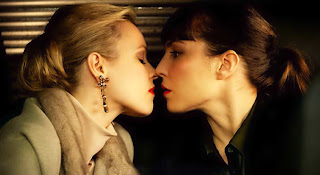 A remake of the 2010 French film Love Crimes, Passion finds advertising big shot Rachel McAdams and her assistant Noomi Rapace thrown into competition with one another after McAdams takes credit for an idea that isn't hers. Before long, they've entered into a game of one-upsmanship in the boardroom and the bedroom that ultimately leads to murder. And...that's it for plot.

There are a lot of problems with Passion, not the least of which is the central performance by Noomi Rapace, an actress who continues to be cast in a lot of American movies despite not being very good in any of them. Hired as the dark, earthy counterpoint to McAdams' porcelain blonde iciness, it seems as though Rapace's work starts and ends with a haircut and a black wardrobe. It's not that she's terrible. At least terrible would be a thing. She just fails to be a factor, not having the vampy fun of McAdams but not grounded enough to pull off the whole "we're in two different movies" conceit. For any of the sexual mindgames to work, the actresses need to have chemistry. We need to think that they really could start kissing at any moment. Best case scenario? We hope that they will. Rapace and McAdams feel less like characters with any kind of relationship or history than two actresses hired by a casting director. For all of its lesbian teasing, Passion is one of De Palma's least erotic films. I assume the title is meant to be ironic. The movie is downright sterile.

There are sequences and shots in the movie that feel like classic De Palma, but appear to be present only because we have come to expect them. There are dual focus shots here because there were dual focus shots in Blow Out. There is a middle section that's all canted angles and slits of steel-blue lighting, like a film school student's idea of what a dream sequence should look like. It's De Palma imitating older, better De Palma. There is, of course, a lengthy split-screen sequence designed to be the movie's centerpiece, but the technique is almost wholly unnecessary. Far from the masterful split screen sequences in Phantom in the Paradise (the bomb in the trunk) or even Snake Eyes (the assassination), the two sides of the image comment on one another in only the clumsiest of ways. Just focusing on the right side would have generated enough suspense. The other half of the screen is used to show the ballet one of the characters is watching, suggesting that a) De Palma didn't know what to put on half the screen, b) De Palma is way too in love with the very obvious metaphor of a "dance" between two people or c) De Palma really likes this particular ballet and shoehorned it into the movie. I think the second two theories are accurate. 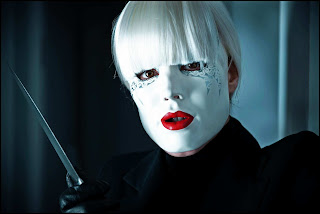 And, of course, the real heartbreaker: what little blood is shed in the movie is done via CGI. This is the man who dumped buckets of red stuff on Carrie White. The man who made John Cassavetes explode 13 consecutive times. How can he resort to pixelated blood, especially when it dulls the impact of arguably the film's most important moment? Say it ain't so, BDP.

A lot of the plot is reliant on tech-talk and corporate culture, and De Palma's screenplay is mostly tone deaf with all of it. Movies consistently run into problems when they require characters to be VERY IMPRESSED by something that is not very impressive, which is why so many movies just avoid actually revealing that thing; for Passion, it's the viral video that Rapace creates for a smartphone that is NOT GREAT but which we are asked to believe dazzles high-level executives worldwide. The rest of the film's corporate speak is not much better, as Rachel McAdams barks things like "I want those figures on my desk by tomorrow!" For a film set in the cutthroat (literally) world of the tech business, the screenplay seems entirely uninterested in understanding the tech business.

So much of Passion is about doubles: characters have twin siblings, scenes play out in front of mirrors, one incredibly important sequence involves a character literally wearing the mask of another character. This, too, is a recurring theme of De Palma's work: Sisters, Body Double, Raising Cain, Obsession, Femme Fatale. Why this is an idea to which the director keeps returning I cannot say, except that he clearly saw Vertigo as a young man and it never left him. Does it ever leave any of us? But the reappearance of this theme raises another question about Passion: can a movie with this much De Palma in it be a "bad" Brian De Palma movie?

Not for me, but that could be the apologist talking. I liked enough of Passion, but I would be lying to call it a complete success. I find myself making excuses for it as a Brian De Palma fan in much the same way I walked out of The Black Dahlia convincing myself that it was a subversive success (a theory which I still hold to be true, and a big part of the reason I don't dare revisit the film). I have enough faith in the director to believe that there must be more "there" there. There are sequences that remind me of everything I love about De Palma, and plotting/thematic patterns that I suspect will improve on repeat viewings. Oh, and the final shot is a great one -- De Palma's rebuke of a motif he invented nearly 40(!) years ago in Carrie.

Is it a movie that's going to appeal to much of an audience outside of hardcore De Palma fans? Probably not, because it plays too much like the director's greatest hits. The screenplay (adapted by De Palma) says very little that hasn't been said before -- there is some attempt at commentary on our current state of living under 24-hour surveillance, but it doesn't add up to much -- leaving the movie mostly an exercise in style. That's the director's strong suit, meaning the movie still hums along with operatic precision and pushes a lot of my De Palma buttons even when it's a lot of empty calories. It's hardly among the director's essential work, but evidence that he can certainly still make an effective thriller with more on its mind than just cheap sex -- not that there's anything wrong with that. He may have lost a step or two, but at least he's still in the race.

What's best about Passion is its utter movie-ness. All of De Palma's thrillers are ultimately about their function as movies -- he doesn't deconstruct reality so much as reveal different versions of the truth. That's what movies do: tell us versions of the truth. In the words of Jean-Luc Godard, "Every cut is a lie."

No one cuts like De Palma.
Posted by Patrick Bromley at 7:36 AM