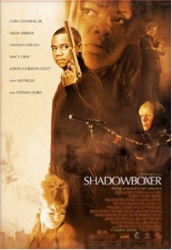 This column contains spoilers for Shadowboxer. Don’t worry about it.

After recommending Lee Daniels’ The Butler on a recent podcast, Patrick asked if I had seen Daniels directorial debut, Shadowboxer. I said I had not. He told me it should literally be the next thing I see. Patrick wasn’t saying it was good but that it was definitely something I should check out. After watching Shadowboxer, I am wondering if this was some sort of payback for my endorsement of Satan’s Little Helper.

The plot in short: Mikey and Rose (Cuba Gooding Jr. and Helen Mirren) are professional contract killers who carry out jobs for a gangster named Clayton (Stephen Dorff). Clayton suspects that his wife, Vicki (Vanessa Ferlito), has been unfaithful so he hires Mikey and Rose to eliminate Vicki -- who happens to be pregnant with Clayton’s son. As Rose gets ready to carry out the contract, Vicki’s water breaks and Rose and Mikey choose not to kill her, but instead deliver her baby, keep both Vicki and her child under their protection and raise the child together as a family. Rose is dying of terminal cancer and also happens to be Mikey’s lover, despite the fact that she raised Mikey since he was a boy similar to what Mikey and Rose are doing for Vicki’s son. Also factoring into the plot are a doctor under the employ of Clayton whose name is Dr. Don (Joseph Gordon-Levitt) who is in a relationship with one of his nurses, who is coincidentally named Precious (played by Mo’Nique). Will this unusual family live their lives happily ever after, or will Clayton re-enter the picture? 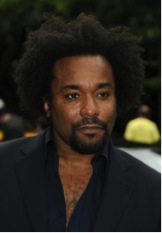 Lee Daniels is a very passionate director. You can tell that, good or bad, he means it. His choices are often fearless. But in the case of Shadowboxer (and The Paperboy, which is unwatchable) his fearlessness should make the audience afraid. After watching Shadowboxer, I did some reading about the movie online and came across a video interview he did during the press tour. He said that when dealing with the studio and the MPAA, you need to "give them this much cock" (he holds his arms out to massive cock size) to get "this much cock" (he hold his fingers to flaccid cock size). I think he was allowed to show more cock then he initially intended. This movie is big cock, figuratively.

So, what is in Lee Daniels’ cock (i.e. what is his style)? Oedipal complexes, sharp objects penetrating butts, random shots of a zebra, an overly busy musical score, overproduced art direction, melodrama, cross dressing and random uses of slow-motion photography. It’s a miracle that the same man who made Shadowboxer made Precious and The Butler. There’s a theory I’ve heard that there are certain movies so bad only a good director could have made it, and I think Shadowboxer falls into that category. Even with two out of his four movies being utterly awful, I don’t doubt Lee Daniels is a good director. He has a point of view and a personality. He is normally good with actors (he clearly can get them to do whatever he wants, as evidenced by the shit he puts Cuba Gooding Jr. through in Shadowboxer) and he knows how to make a movie. His successful movies just prove that he needs to be reined in a little so that he doesn’t indulge his worst tendencies.

Let’s go back to the point of view comment for a second: in reading about Daniels, I learned that he is a gay man who was physically abused as a child. That explains a lot of his choices in Shadowboxer, though it doesn’t justify them to the point of being good for the movie. The movie has a theme of the harm fathers do on their legitimate or surrogate sons and the positive aspects motherly figures can have on those same sons. So, Shadowboxer is coming from a real place, but Daniels was not at the point in his career where he could make that statement in an approachable, effective manner. 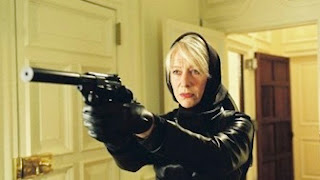 Shadowboxer is more similar to The Paperboy then his other work in that it's really just a pulpy crime movie at heart. In the same interview I mentioned earlier, Daniels said he was influenced by Scarface, The Godfather and The Professional, among other gangster and hit man movies. It’s very obvious that this is the case, because none of the characters in Shadowboxer seem like real people. They are photocopies of characters from other movies that were broad to begin with.

First, let’s address this hit man thing. Why are there so many g-damn hit men in movies? They are hardly ever interesting -- always conflicted and with a heart of gold under the surface. The gangster characters, particularly Stephen Dorff, are snarling goons who seem so volatile and stupid that you question how they ever got their empire to begin with. The genre elements are total trash, but Daniels takes the "this is my first movie" approach and lavishes the story with dunderheaded melodrama and a tone-deaf musical score. The movie closes with a child murdering an adult, promising to "kill them all" if anyone comes for revenge before jumping to end credits music more appropriate for Midnight in Paris.

This movie is fucked up. To paint that picture, I’m just going to share a top 10 list of the most messed up elements in Shadowboxer.

10. Vicki’s son is attending what seems to be an upscale school, but the teacher calls her students in to the classroom by saying "Get your ass in here now." In front of a parent!
9. Mikey and Rose accept their contracts from a bow-tie wearing middle-man in a wheelchair who hands them giant envelopes of information about the next hit. In broad daylight. On a public pier. To further avoid looking conspicuous, Mikey carries a silver metallic briefcase.
8. Mikey shadowboxes about a dozen times during the course of the movie despite never having a boxing fight or it being said that he was once a fighter.
7. Joseph Gordon-Levitt and Mo’Nique are a couple named Dr. Don and Precious.
6. Clayton randomly keeps a single zebra on his front lawn.
5. Rose gives Mikey a bath.
4. Mikey stripteases for Rose.
3. Mikey assassinates someone in drag. The following scene shows him sitting on a corner looking sad while still in drag.
2. Clayton is shown with his weiner in a condom after having sex with a random woman, then shoots three people outside the door for talking while he’s having sex. 1. Mikey has sex with Rose in the woods (the photography makes it look like Edward and Bella having sex in the land of Oz), which is cross-cut with a backstory sequence showing Mikey being beaten by his father and Rose killing Mikey’s father to protect him. Mikey finishes Rose off in the woods -- she comes and he shoots her in the head.

Shadowboxer doesn’t crap on my memory of Precious or The Butler being solid movies, but it does make me aware that Lee Daniels is a filmmaker to be avoided if he’s venturing into genre fare. He doesn’t have the sensibility for it. The main problem with Shadowboxer is not that it’s bad. It’s how it is bad. Anything could happen during the course of the movie, but instead of being exciting and surprising it devolves into a mess of unappealing sameness. I never felt like I was in good hands.
Posted by Patrick Bromley at 7:27 AM