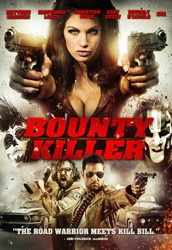 The poster for Bounty Killer makes it look like every DTV action movie clogging up your local Redbox. It's so much better than that.

It's an interesting thing: since the release of Grindhouse in 2007, we've seen dozens of movies that seem to imitate that movie's approach of paying tribute to the sleazy, violent exploitation movies of the 1970s and '80s. Even major studios have gotten in on the act, releasing not one but two Machete movies (itself a Grindhouse spin-off). Not only is this kind of influence incredibly ironic -- Grindhouse was a flop, after all -- but the quality of these knock-offs vary wildly. Most err on the side of terrible. For every Hobo with a Shotgun, there's a Cherry Bomb -- inept, paper-thin showcases of sex and violence that disguise their shortcomings with cheap, DIY spirit.

The more I think about it, the less I suspect that this wave of movies are being in response to Grindhouse. It's more likely that they're being made a) because one way to make a low-budget movie is to call attention to your low budget as a deliberate aesthetic choice or b) they're being made by a generation of filmmakers who grew up on cable TV, VHS tapes, Troma movies, USA Up All Night, John Carpenter, Sam Raimi and The Road Warrior.

Those are but a few of the influences on Bounty Killer, the latest film from director Henry Saine, which plays like someone took tapes of a bunch of the movies I grew up loving and threw them in a blender. Shot in 18 days for about $1 million, there is an incredible amount of energy and ingenuity in Bounty Killer -- Saine has packed a LOT of movie in for such a low budget, staging elaborate set pieces (like an old-fashioned stagecoach chase that replaces the stagecoach with an RV and horses with motorcycles) and tons of funny, violent gunplay. 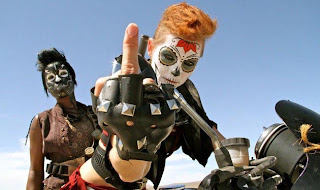 It's the future. Corporate conglomerates have destroyed the world, leaving cities as wastelands where chaos reigns. New rulers are put in place to salvage the dystopia, and one of the first laws of this New World Order is that all white collar criminals are to be hunted down and killed as revenge for their corporate crimes. Enter Drifter (Matthew Marsden, School Boy from 2008's Rambo), a Bounty Killer tasked with racking up the corpses of businessmen (who all wear yellow ties, making them easier to identify). His partner/rival is Mary Death (Christian Pitre), an impossibly sexy assassin who fully embraces her role as a kind of pinup celebrity -- she's the best-known, beautiful face of the Bounty Killers. When a Wanted poster turns up implying that Drifter might have connections to corporate America, Mary sets her sights on taking down as he races to clear his name.

Bounty Killer was originally made as a short film in 2011; actually, it was originally designed as a possibly animated series based on a series of drawings, which were then turned into a short film which was then adapted into a comic book, all by Saine (which helps explain why the movie feels very much like it's based on an independent comic -- it kind of is). The short film also starred Christian Pitre as Mary Death. It's easy to see why Saine would want to expand the short to feature length; not only is there a lot of world built into this concept, but Pitre/Mary Death begs for her very own movie -- and Bounty Killer really is Pitre's movie. Sure, Drifter is the de facto lead, but he's pretty vanilla in a universe this colorful and can't possibly hope to stand up to Pitre when they're on screen together. Saine wisely steers the movie towards Mary Death, understanding that she's the breakout character (and Pitre gives a breakout performance). It would have been very easy to make Mary Death a cardboard construct of big guns, short skirts and slinky one-liners, but Saine and Pitre give the character a surprising amount of depth. As the film continues and Mary Death's backstory is slowly revealed, her relationship with Drifter picks up some actual weight. 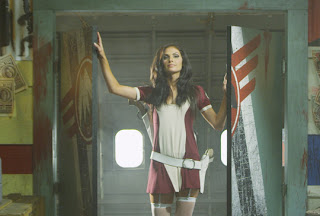 Though the movie sometimes strains against the limitations of the budget -- the action can be choppy and there are a number of explosions that look like they were created in AfterEffects -- it's nothing that distracts from the movie (if you're like me, it becomes part of its charm). That's because Saine knows how to stretch a dollar, making a movie that looks like it cost at least 10 times as much as its actual budget. As this summer has demonstrated, no amount of money can compensate for imagination or invention, and Bounty Killer has both those things in spades. It's in the broad strokes, like the mythology of the Gypsies -- murderous bands of face-painted savages (led by rapper/sitcom star Eve) -- but it's in the little touches, too, like the presence of Bounty Killer assistants, called "gun caddies." Drifter's gun caddy (played by Barak Hardley, star of Saine's first movie The Last Lovecraft) is the source of lot of the movies funniest moments, which is impressive considering just how annoying and unfunny this character could have/should have been. Think Rob Schneider in Judge Dredd. Barak Hardley is no Rob Schneider.

Hopefully that comes across as the compliment it was intended to be.

There are a handful of celebrity cameos in the movie to lend it some star power, including Beverly D'Angelo as a madame, Kristanna Loken as the movie's Big Bad and Gary Busey as a corporate henchman. They're fine and I'm sure they helped raise some money or help the movie out in a couple of territories, but they're almost completely unnecessary. It's very obvious that each of these actors was only available for a day or two, and their scenes rarely add much to the movie. Kristanna Loken's performance is problematic, but she's at least integral to the plot -- plus, she's involved in a few of the movie's best moments. The Gary Busey cameo is the only one I have a real problem with; while Saine doesn't play his appearance for laughs, necessarily, his participation alone tips the movie in an "ironic" direction. Don't be fooled; Bounty Killer is not some self-aware B-movie winking at its own existence. It can be goofy, sure, and it knows what movie it is, but that doesn't mean that Saine isn't playing it straight.

Most importantly, though, is that Saine understands the value of a gag. Movies like this don't add up to much if there aren't any moments you can point to and say "Oh, and remember THIS crazy/funny/violent thing?" Bounty Killer comes up with a new and inspired gore gag every couple of minutes, including the best head-splitting moment since Dead Alive and a fantastic climax set inside an office building. Saine has a lot of fun staging bloodshed and isn't afraid to keep things goopy and wet, but the results usually make us laugh instead of gross us out. As it should be. 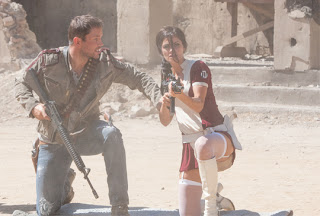 I've seen so many movies that try to do what Bounty Killer does and get it wrong, so it's nice to find something that actually does it right, walking that tricky line between pastiche tribute to the genre cinema of the past and satisfying standalone effort. It's not a movie for everyone -- you have to have a real affection for the kinds of movies that inspired it -- but it is unreasonably entertaining. I laughed and smiled (I would say "giggled," but, you know, fuck Harry Knowles) through most of its running time, and by the time it ended found myself more than ready for the Continued Adventures of Mary Death.

Bounty Killer is currently available on Amazon Instant Video, VOD and in limited theatrical release. It will be released on DVD and Blu-ray on October 29.
Posted by Patrick Bromley at 2:45 PM