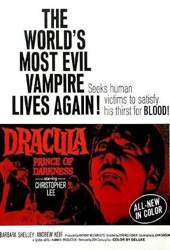 Trying to assess the actual merits of 1966's Dracula, Prince of Darkness is a little like trying to assess the merits of the fourth or fifth film in one of the Universal Monsters sequel cycles -- you're either on board with it or you're not. Not many people watch Lon Cheney Jr. play a mustachioed vampire in Son of Dracula because it's an objectively great movie. They watch it because they love Universal Monster movies, and it happens to be one of them. The same can be said of Hammer horror: outside a handful of truly terrific movies (Curse of Frankenstein is the best that I've seen), what gets us coming back the films again and again is the atmosphere, the violence (there should be a shade of red named after Hammer blood), the cleavage and, most importantly, the actors. Hammer horror movies look and feel like no other. You're either on board with it or you're not.

The third movie in Hammer's Dracula cycle reunites star Christopher Lee (who skipped out on 1960's Brides of Dracula) with director Terence Fisher, the filmmaker most associated with the best of the Hammer films. Essentially ignoring Brides, Prince of Darkness opens with a montage of scenes from Horror of Dracula and acts as a sequel to that movie: four tourists travel to Karlsbad and visit Castle Dracula, where they are welcomed by the Count's servant, Klove (Philip Latham). Unfortunately for them, Klove uses the blood of one of his guests to resurrect Dracula, who returns to drink the blood of the women (Barbara Shelley and Suzan Farmer, so you can't blame him) and turn them into his willing slaves/new brides. You know. Dracula's gotta Dracula. 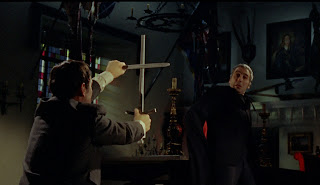 Like several of Hammer's monster movies, Dracula, Prince of Darkness doesn't feature the monster all that much. That's too bad, as Christopher Lee is the best thing about the movie (especially without Peter Cushing around to carry things when he's not on screen). His Dracula is very different from Bela Lugosi's; though he's regal in stature and has the incredible voice, Lee plays the part as silent -- he's a hissing, bloodthirsty animal in a British Lord's frame (the story goes that Lee opted to take out all of his own dialogue because he wasn't happy with it). He feels more dangerous than any past iterations of the character, like he's going to bypass sneaking into your bedroom at night and just rip out your fucking throat where you stand.

The loss of a worthy adversary is what hurts Prince of Darkness most, since neither Francis Matthews or Andrew Keir (playing Father Sandor, the priest responsible for delivering exposition) are a worthy replacement for Peter Cushing's Van Helsing. What the movie then amounts to is a collection of wet blankets, some of whom are killed, some of whom are turned into vampires and the others of whom emerge victorious. Unfortunately, we don't really care. The "young lovers" are always the least interesting characters in any horror movie, and Dracula, Prince of Darkness finds no exception to this rule. It's a movie made up entirely of young lovers, like a late-era Marx Brothers movie with no Marx Brothers. The closest thing the film has to a Van Helsing is Andrew Keir's priest, but he can't even come close. 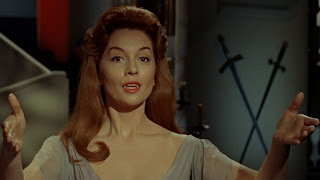 But the film charms in the end, because it has a lot of the stuff we love about Hammer movies: besides the (sparse) presence of Christopher Lee and the beauty of Barbara Shelley and Suzan Farmer, there's the gorgeous production design by Bernard Robinson and art direction by Don Mingaye -- everything feels a little bit like a set on a backlot, and that's just the way it should be. James Bernard's score is heightened and theatrical in the best way. Best of all is Michael Reed's cinematography, mostly because I'm a sucker for the vibrant Technicolor palettes of the '50s and '60s. This is a gorgeous movie (even more so in high def), which helps me overcome the many narrative shortcomings. It's not my favorite Hammer Dracula movie, but it's leagues better than the "disco vampire" depths to which the franchise would sink in just a matter of years with garbage like Dracula A.D. 1972.

Dracula, Prince of Darkness is the first of the Hammer films to get a North American Blu-ray release, courtesy of Millenium Entertainment. It sports an excellent 1080p transfer that erases almost any sign of aging and brings out the best in the eye-popping Techniscope and a commentary track that reunites stars Lee, Farmer, Shelley and Francis Matthews that's a whole lot of fun. Also included is a 30-minute retrospective on Christopher Lee's relationship with Hammer and a new behind-the-scenes documentary. There's also a short piece on the HD restoration, the original trailer and a gallery of stills from the movie. It may not be my favorite Hammer horror film, but the package Millenium has put together is a great one and actually increases my appreciation for the movie.

Scary Movie Month is just two weeks away. You'll want to pick this one up, if for no other reason than so that Millenium can release more Hammer on Blu-ray. 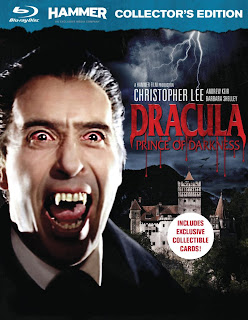 Posted by Patrick Bromley at 11:37 AM