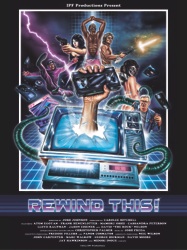 We talk a lot at F This Movie! about nostalgia, about collecting physical media, about expressing our identity through the movies we do and do not own. All of those discussions were going through my head as I watched Rewind This!, the new documentary by Josh Johnson about the rise and fall of VHS (not to be confused with Adjust Your Tracking, another VHS-centered doc currently making the festival rounds and unseen by me).

I was worried in the early goings of the film, as a series of talking heads with ironic glasses and/or hipster mustaches praise VHS and brag about being collectors. Oh shit, I thought, is that what Rewind This! is going to be? An ironic documentary focused on ironic people pleased with themselves for ironically championing an obsolete, now-kitschy format?

The movie is not that at all.

Instead, Rewind This! is a thoughtful and informative film about the history of the VHS format, the ways that it quite literally changed the face of filmmaking (from getting dozens of movies made that otherwise never would have been to forcing filmmakers to reconsider the framing of their shots for when movies would eventually be chopped to 1:33:1 for their video presentations), our relationship with physical media and the way that it's all disappearing out from under us. Part history lesson, part love letter, part memorial, Rewind This! should be essential viewing for any self-respecting movie fan. It's fantastic. 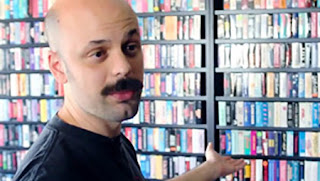 Many of us around these parts came of age in the era of VHS. It's what made us fall in love with movies. In the '80s, when smaller rental stores were still a thing and hadn't been swallowed up by the same two or three corporate chains, there was hardly a movie you could think of to which you wouldn't have access. Quite frankly, we were spoiled -- we don't realize just what a revolution video was to a generation of movie lovers who couldn't watch a movie over and over again unless they found it on TV or bought their own 16mm print. But VHS opened up the world of cinema to everyone, allowing us to rematch our favorites until we could recite them from memory and, more importantly, introducing us to thousands upon thousands of new possibilities. I first saw Reservoir Dogs on video. Same with Streets of Fire and Phantom of the Paradise (in fact, every DePalma movie pre-Mission: Impossible). Many of my favorite movies were discovered on VHS. I have that in common with a lot of the talking heads in Rewind This! who, to a person, are passionate and articulate lovers of movies. Even the hipsters. There is a scene near the end of the movie in which one interview subject very touchingly explains the philosophical weight of the "Be Kind, Rewind" sticker. It's one of my favorite scenes in a movie this year.

Though the quality is clearly inferior to newer formats like DVD and Blu-ray, videotape, like film, is tactile. It can be bent, broken or worn. The actual material tells its own story. As one commenter in the movie points out, when he would get a tape that looked and sounded like shit he knew he was in for something special -- it meant he was watching a copy of a copy of a copy and a lot of people felt it was a movie worth seeing. There's a section in the movie on nudity and the way that VHS made it possible to watch and rewatch the naked parts over and over again, so much so that if a give tape would start to skip or the tracking would suddenly get thrown off, you knew that a nude scene was coming up. It's one of the things I love about Rewind This! -- for all of its intelligent discussion on the transient nature of media, it also finds time to celebrate the kind of juvenile shit that us VHS kids were into. 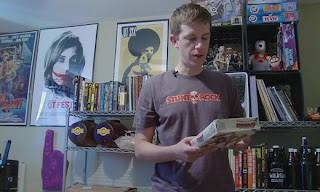 Director Johnson assembles a panel of "experts" to explain the background and extoll the virtues of videotape: filmmakers like Atom Egoyan, Frank Henenlotter (who appears to have become a cool, vulgar Mickey Rooney), Lloyd Kaufman, Yoshinori Chiba and Charles Band are interviewed alongside programmers at the Alamo Drafthouse and Cinefamily, critic Drew McWeeny, horror celebrity Cassandra Petersen, and even independent filmmaker, Chicago mainstay and all-around eccentric David "The Rock" Nelson, who has been shooting and releasing homemade monster movies on VHS since the '90s. Everyone agrees on one thing: VHS was fucking awesome, not because of its quality but because of the way it brought us all closer to the movies we love, movies yet to discover and movies we could never have otherwise seen.

Because that's the thing about the video age: it was the wild west. Distributors and rental outlets were so desperate for content that EVERYTHING was made available. Videos could be rented just based on their incredible cover art, to which Rewind This! spends a few minutes paying tribute. I can still remember the cover art for Microwave Massacre scarring me as a nine-year old scanning the shelves of Video Galaxy, but in that way that I always had to make a point of looking at it; as the documentary points out, there's a very, very good chance that the movie itself would be garbage and not live up to the box cover. But now all these titles are going away. Thousands were lost in the transition from VHS to DVD, even more from DVD to Blu-ray. Every time a new format comes into fashion, the available library is pared further and further down.

Even though it's about a format that's been dead for a nearly decade (the last tape that was mass produced was A History of Violence), Rewind This! couldn't be more timely. It's not just a movie about the end of reign of VHS. It's about where we are at now, not just with physical media dying out but with the way we experience movies changing forever. It's being taken out of our control. We are limited to what we can see by what is made available on streaming or download. Titles can disappear for no reason and with no warning, meaning a movie you own today can be taken away from you tomorrow without your consent. The people interviewed -- and the movie itself -- are sad about that, and rightfully so. 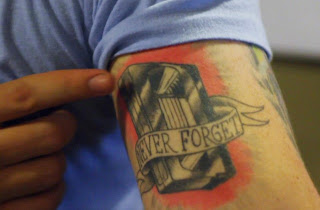 Of course I loved Rewind This!. As movie fans, we are hard-wired to respond this kind of documentary, which is alternately informative and celebratory, and which finds a commonality in all of us as film lovers and collectors. Like the best documentaries, what seems like a "niche" subject expands its scope to be about bigger issues and speaks directly to us. For 90 minutes, Josh Johnson's movie makes us feel heard. Better than that, it makes us feel understood.

Be kind, everyone. Rewind.

Rewind This! is currently available on iTunes, Amazon Instant Video and VOD. It has not, as far as I know, been released on videotape.
Posted by Patrick Bromley at 2:44 PM