Five Movies That Made Me Love Horror 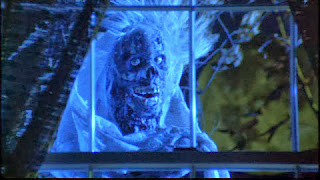 Horror fans aren't born. They're made. Here are five movies that made one of me.

It should be said that I would only count one of the titles on this list as one of my favorite horror movies of all time. The rest are just movies I like, or that I saw at the right time, or that opened my eyes to a bigger world. 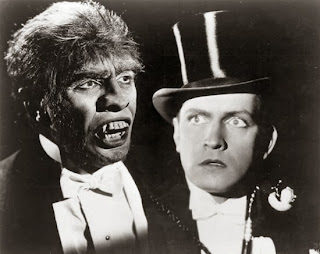 1. Dr. Jekyll & Mr. Hyde (1931, dir. Rouben Mamoulian) I grew up right down the street from our town's public library, so it was very easy to walk over and check out stacks of books at a time. I did this all the time. It helps that I am not athletically inclined. The majority of the books I would check out were about monster movies; there was a series published by Crestwood House that I had checked out on an endless rotation, and another book called Movie Monsters by Thomas G. Aylesworth that I would return only long enough for it to be shelved so I could take it home again. 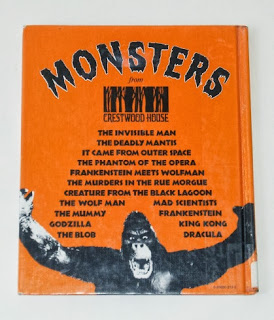 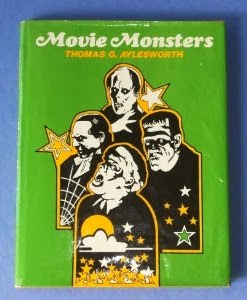 It was these books that made me fall in love with monster movies. Long before I had ever seen a frame of Dracula or The Wolf Man, I was obsessively poring over the pages, memorizing the production stories, learning the names of the actors and -- more than anything -- studying the makeup. The monster I was really drawn to was Wally Westmore's makeup for Mr. Hyde from the 1931 version of Dr. Jekyll & Mr. Hyde starring Frederic March. It looked like some kind of cross between a monkey and a monster. I had to see more, and I couldn't.

The '31 Dr. Jekyll became one of the Holy Grails of horror for me, as it was out of circulation for decades after MGM bought up the rights so they could remake it badly with Spencer Tracy. All I knew of the movie existed in those photos. It wasn't until I found a laserdisc of the movie in the Tower Records cutout bin in the late '90s that I finally got to see it. And guess what? It's one of the best horror movies EVER MADE. Brilliantly directed by Rouben Mamoulian, brilliantly acted by Frederic March and crazy transgressive in the way that only pre-code movies could be, the '31 Dr. Jekyll & Mr. Hyde is way ahead of its time. It's now available on DVD. If you haven't seen it, you have to. 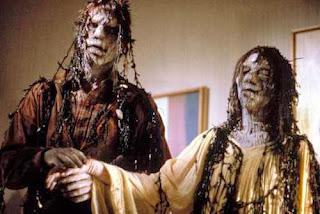 2. Creepshow (1982, dir. George A. Romero) Sometime around the age of 8, my parents decided it would be ok for me to see my first R-rated horror movie. That movie? Creepshow. It was a good pick, because it's scary and violent (though not too violent) but also light and fun. Plus, it had a great message for any eight-year old: Don't Be An Asshole or Monsters Will Kill You.

So my Dad rented the movie, only to discover upon trying to play it that our VCR was broken. He tried to fix it, and when that didn't work, he tried to rent a VCR from 7-11 (this was during that brief period when 7-11 was renting videos -- and video players, apparently). No dice. I ended up with eight-year old horror movie blueballs. I can't remember if it was days or weeks later, but I did see Creepshow and only managed to look away when the cockroaches climbed out of E.G. Marshall. Needless to say, I loved it and continued to love it to this day. It introduced me to George Romero, to Rated R horror, to E.C. Comics and to the lengths a parent will go to show his or her kid a really cool movie. 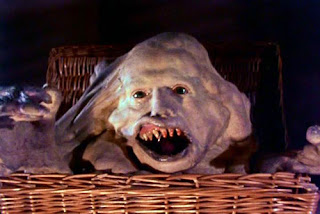 3. Basket Case (1982, dir. Frank Henenlotter) I don't necessarily love Basket Case. It's crazy and entertaining and very good at being what it is -- I don't have a problem with it, but I don't have much of a relationship with it, either. It's on here because it's the first movie I can think of that I saw as a late night viewing on cable that exposed me to an entire other world of horror -- movies that were cheaper, gorier, sometimes sillier and totally unique and wacky. Many of these movies were first seen on USA Up All Night. My family would take two driving vacations a summer, and my siblings and I were allowed to stay up late the night before we left so that we would hopefully sleep in the car. Other movies that could possibly have appeared in this slot include Night of the Creeps, TerrorVision and C.H.U.D. More than any of those, though, Basket Case represents a side of horror that's totally opposite the classy, quite scares of Dracula and Frankenstein. The feeling I got watching Basket Case as a kid is the same feeling so many of us chase with horror movies still today: "I'm not sure I should be seeing this..." 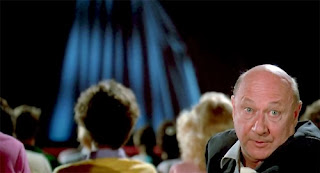 4. Terror in the Aisles (1984, dir. Andrew Kuehn) This is a horror movie clip show that used to show with some regularity on TV in the '80s. Hosted/narrated by Donald Pleasence and Nancy Allen (two names that meant nothing to me the first time I saw it, to give you some idea of just how green I was), it cycles through dozens of iconic moments from horror movies (and some movies that BARELY count as horror). This was my introduction to many a famous moment in horror, from the head exploding in Scanners to the transformation scene in American Werewolf in London to the first appearance of Leatherface in The Texas Chain Saw Massacre. It was like a sampler, showing me just enough of a bunch of movies to make me interested in tracking them down. Long unavailable on anything but VHS, Terror in the Aisles was finally released on DVD a few years back as part of the special features on Universal's Blu-ray of Halloween II. Watching it for the first time in at least 20 years revealed that it is basically a terrible movie -- the narration is stupid, the clips repetitive and arbitrary. It doesn't matter now. What matters is that it got the job done when I was kid, making me want to see a whole bunch more horror movies. So...thanks, Nancy Allen? 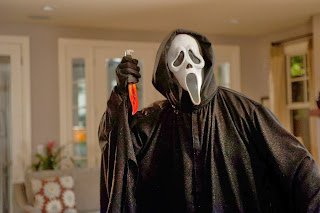 5. Scream (1996, dir. Wes Craven) A friend and I saw Scream the day it opened in 1996 in a mostly-empty movie theater. We both loved it. The '90s had been mostly rough, horror-wise, but here was a movie that celebrated the conventions of horror while still being a kick-ass horror movie. It also ignited a resurgence of the horror genre which has yet to subside; while there were plenty of terrible imitators released in the wake of Scream, the movie still deserves credit for making horror viable again. But the REAL reason that Scream reminded me of why I love horror is because a week or two later I went back to see the movie and it was a completely different experience. Word of mouth had caught on. The movie was a huge hit. Seeing it in a packed theater on a Saturday night with a date who hadn't yet seen it made for one of the best theatrical screenings of my life. The audience laughed and screamed. My date laughed and screamed. It was SO MUCH FUN. After a long drought, that screening was a much-needed reminder that done right, horror movies are the best kind of communal audience experiences.
Posted by Patrick Bromley at 7:48 AM