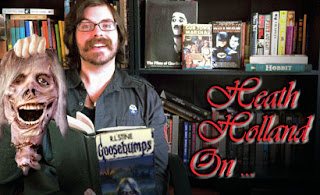 These two films from opposite sides of the tracks were made to be together.

Suck (that’s really what it’s called) and Dark Floors are two horror films that take two very different approaches to horror. Because they both know what kind of movie they are, I think they make a great double feature…if you can find them.

Suck (no, seriously, that’s what it’s called) is a 2009 low budget movie from Canadian actor/director Rob Stefaniuk. The plot involves a small-time rock band (managed by Dave Foley from The Kids in the Hall) who just can’t seem to make a dent in the local music scene. One night after a show, the band’s bass player, Jennifer (Jessica Pare from Mad Men), goes home with another band’s singer named Queeny. Queeny is a vampire played by Dmitri Coats, frontman for Burning Brides. 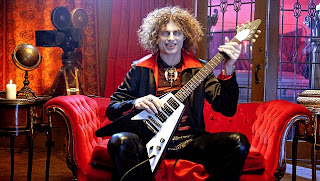 Also appearing in the film is Malcom McDowell as a vampire hunter named Eddie Van Helsing (you see what they did there?), hot on their heels and hungry to avenge the loss of someone he loved. Apparently Malcolm McDowell doesn’t say no to roles these days. His presence here actually does manage to elevate the material a bit. His flashback scenes are lifted from one of his films from the 1970s. It’s kind of awesome.

This was Rob Stefaniuk’s second feature film and it shows. Certainly not everything that is attempted actually works. Like a lot of small horror movies, the concept either exceeds the filmmaker’s reach or simply can’t sustain a 90 minute running time. Suck runs out of steam at a few points and doesn’t quite deliver on the ideas it presents. Still, it tries pretty hard, and the irreverent, tongue-in-cheek tone go a long way to making up for its shortcomings.

The soundtrack is full of genuinely good music that creates a fun, wild atmosphere. In addition to Queeny and his music, we also get songs from David Bowie, Alice Cooper, The Velvet Underground and Iggy and the Stooges. 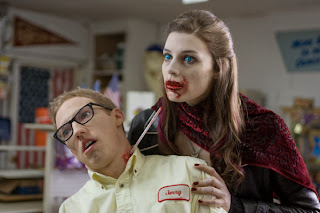 Suck is horror with a healthy dose of camp. There are several stop-motion animation sequences in the film and a lot of very dry, black comedy scenes. You can tell that it really wants to exist in the same rarified air with The Rocky Horror Picture Show, which is an unattainable goal. The surprising result, though, is that it does manage to succeed as being a perfectly acceptable and fun midnight movie. The good thing about trying to replicate the spirit of The Rocky Horror Picture Show is that even when you fail, the results are still pretty entertaining.

Dark Floors is an entirely different beast altogether. It was designed to be a vehicle for the Finnish hard rock band Lordi. Lordi have achieved some success in America, but (like me) are actually huge in Europe. Taking a cue from their heroes, KISS, Lordi have elevated the idea of rock stars playing in makeup to a whole new level and play in full horror-monster costumes. I’m not talking about Slipknot -- I’m talking about Predator-level immersion into silicone and prosthetics. I’m not sure how a band can play covered up in so much foam rubber, but they do a fine job. Each member of Lordi has designed a monster persona that they can update and constantly modify. Their videos are like little slasher horror movies where they both sing their song AND kill hapless victims. Their video for “Blood Red Sandman” is my favorite, perfectly blending kids getting picked off at a cabin in the woods with rock star posturing. Watching their videos and how they take so many influences from horror movies, the band is a perfect candidate for their own horror feature film.

Dark Floors centers around an autistic girl, her father, and a group of strangers trapped inside a haunted hospital. Each floor of the hospital contains a different ghost/monster/member of the band…and that’s really about all there is to it. But it’s quick, breezy, and doesn’t have lofty aspirations; it just wants to showcase the monsters and some fun kills. Taken as just that, it’s enjoyable entertainment with more than a little respect for the larger-than-life monster anti-heroes of the 1980s.

Artistically, the film could really have benefitted from a deeper plot or some tricks up its sleeve, but it doesn’t seem interested in subverting expectations. The members of Lordi appear to love horror so much that they’re content to follow the same clichés and go through the motions. 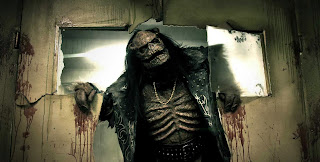 Dark Floors was released theatrically in Finland in early 2008 and later that same year in America as part of the Ghost House Horror DVD series. Like most direct-to-DVD horror, it’s become almost completely forgotten, which is a fate it doesn't deserve. It’s not a breathtaking cinematic achievement, nor does it manage to break any new ground in horror by showing us anything we haven’t seen before. But it’s fun, and it’s made by people who love horror.

Suck and Dark Floors are both solid films made with an obvious wink to the audience to play along and have a good time. Yet both movies seem to have flown under the mainstream radar. They might not deserve to be studied or respected, but they at least deserve to be seen. Together they run less than three hours, making them a perfect rocky-horror double feature. They’re ideal candidates for turning out the lights, hanging out with a few friends and some popcorn and having a rockin’ good time.
Posted by Patrick Bromley at 12:48 PM