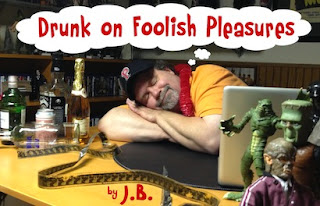 WARNING: This week’s column gets a tad esoteric. Buckle up, F-Heads.

This past Sunday I was lucky enough to attend the semi-annual Chicagoland Antique Advertising, Slot-Machine & Jukebox Show™ at the Pheasant Run Resort in St. Charles, Illinois. According to its website, it is the largest show of its kind in the world.

I will (mostly) confine my comments here to the part of the experience that was movie-related; however, this “Con” is really a treat for lovers of nostalgia, history, and our ever-fading past. It felt at times as if I had tapped an unusually rich vein of my grandpa’s basement. He owned both a malted milk machine and a jukebox!

The Antique Show reminded me of where our beloved movies really started—as one-person-at-a-time, pay-as-you-go amusement devices. One device that many dealers were offering was the Mutoscope, a cheaper and simpler alternative to Thomas Edison’s Kinetoscope of 1888. The Mutoscope was a peepshow, the insides of which housed an enormous flipbook, which was far simpler and cheaper to produce than Edison’s elaborate mechanism driving celluloid film in a continuous loop around endless sprockets. The inside of a Kinetoscope looks like this: 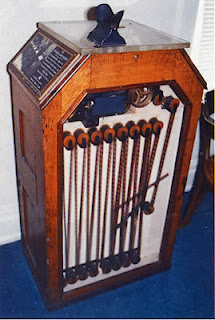 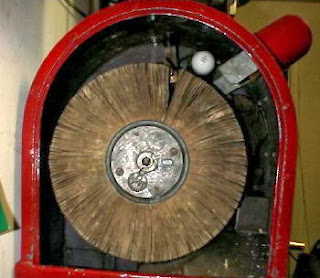 I perused, caressed, cannoodled, or licked (don’t judge me) fifty or sixty Mutoscopes at the show. One particularly enterprising vendor makes his own Mutoscope books. He grabs a short film snippet from YouTube, uses some kind of computer program to break it into separate, printable frames, and cuts the resulting frames out of heavy paper. Then he laminates them and attaches the frames to an empty “spool” that is then placed back inside the Mutsoscope. The result is fantastic—a much clearer picture, a much smoother movement, and a more technologically advanced film than was ever envisioned for the machine.

I watched a short Charlie Chaplin “spool;” his earliest work was made a full twenty-five years after the heyday of the Mutoscope. It was like listening to a high bitrate digital conversion of a 1972 8-Track tape. 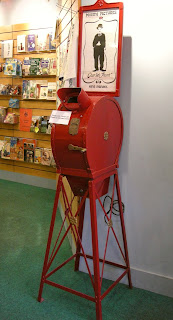 This brought to mind one of my favorite quotes about the nature of cinema. In the documentary The American Nightmare, Professor Tom Gunning of the University of Chicago states that cinema originally promised us all immortality but wound up giving us ghosts. People were promised that their images and motions would be captured on celluloid for all of eternity, but what cinema actually does is capture a mere shadow of a person, a shadow that is condemned to repeat the same actions, words, and gestures for all of eternity.

The same simple actions, repeated over and over for our amusement. For all of eternity.

Penn Gillette of the magic team Penn and Teller once commented that he has  one simple test of any new technology before he will invest his own money in it: is it capable of storing and delivering pornography? If it is, he has concluded, it will be a winner.

The same simple action, repeated over and over for our amusement. It was eye opening to see how many of these early Mutoscope “attractions” were prurient in nature, with titles like “What The Butler Saw” and “In The Girl’s Dormitory.” 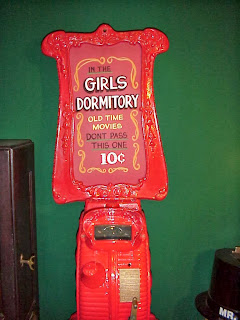 TANGENT: Many vendors also offered restored old-timey restroom condom machines for sale. I have but two questions: WHO? and WHY? Who would buy one of these godforsaken things, even fully restored? And why would they buy one, for a dirty laugh with friends over a remodeled bathroom in a mancave?

NOT REALLY A TANGENT: Why are most Mutoscopes painted red? 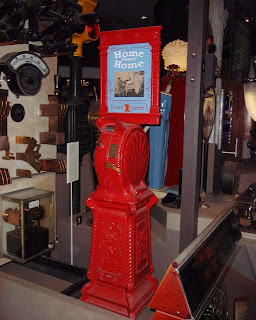 I began to wonder about the future of these peculiar amusement devices and the people who restore and collect them. Will future generations see Mutoscopes merely as outdated appliances, and chuck them into dumpsters with the dented dishwashers and leaky fridges? Will we only be able to see them in museums? Will museums cease to exist because young people see no need to ever leave the house, given that everything comes to them, courtesy of the internets?

Live-streaming online and 4K digital projection: that is the future for movies. I am not a clock-stopper; I believe in progress and technology (I just purchased a 4K TV, and it looks pretty great. Stop being jealous!) Still, I find these devices from before the turn of the last century endlessly fascinating. Mutoscopes may seem quaint, but they have an appealing, they-knew-how-to-build-things-back-then folk art quality to them. In design and ornamentation, no two are alike. They look like a little metal carnival, and they cry out for our nickels and a bit of our attention. I am afraid that the Mutoscope and its brothers, sisters, and bastard cousins – the artifacts that tell the origin story of this thing we love – are about to be consigned to the junk heap of history.

“We walk through history, Doctor Jones. This IS history.”

I did not buy a Mutoscope on Sunday. Maybe I should have.
Posted by Patrick Bromley at 7:48 AM