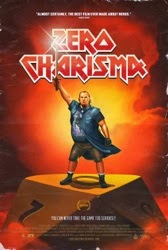 These days, there are more movies than ever being made for nerds. There are way fewer movies being made about nerds -- especially ones as honest as this.

Our current popular culture romanticizes nerdiness in a way that would have seemed unheard of just 10 years ago. Shows about zombies and dragons and fairy tales are among the most popular shows on TV. Every blockbuster released is about comic book super heroes or space battles. The most popular books of the last decade are about vampires and boy wizards. The nerds have won. Hell, Chris Hardwick -- who Devin Faraci once aptly described as the "Ryan Seacrest of geekdom" -- has build an entire career out of being a nerd, hosting every third show on TV and branding his own Nerdist Industries.

Which brings me to Zero Charisma, the debut feature from directors Andrew Matthews and Katie Graham (from a screenplay by Matthews). It's also the first movie to be distributed by Hardwick's Nerdist Industries. There's an irony there, because while Nerdist can be guilty of romanticizing geekdom (even if they do come by it honestly), Zero Charisma plays like the bitter antidote. Those who think it's cool or fun to be a nerd may not be prepared for how dark and difficult Zero Charisma suggests that lifestyle can be to those who really live it. 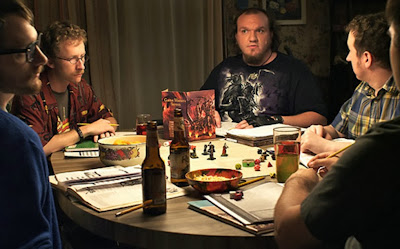 Not that the movie is some sort of nerd pity party. It's a comedy (mostly) that's perfectly willing to celebrate the things that are great about nerddom -- the passion, the joy of losing oneself in hours and hours of gaming with your friends, guzzling liter after liter of soda. But it's also an unflinching look at a person with few to no social skills who knows how to function within the confines of a game but can't relate to people in day to day life. The masterstroke of Zero Charisma is that it doesn't attempt to turn its main character, Scott Weidemeyer, into a cuddly, misunderstood misfit. He is an unapologetic asshole, albeit one who still manages to win our sympathy. Perhaps that's because the audience for this movie knows and understands Scott. The kind of people who would judge or make fun of the character probably aren't watching this movie. Don't worry. They're represented here, too.

Zero Charisma follows Scott Weidemeyer (Sam Eidson), a twenty-something obsessed with his role as the Game Master of a fantasy tabletop roleplaying game. He lives with his grandmother, he works at a sandwich shop, he gets into arguments on a daily basis with those who don't see the world the way he does or, even worse, who don't know as much as him (which is everyone). The only part of his life he seems to enjoy is when he's gaming with his small group of friends, who either like him or tolerate him because the game is just as important to them. When the group loses a member and is replaced by Miles (Garrett Graham), a hipster blogger whom Scott quickly identifies as a "tourist" in his world, things quickly start to go south. The group likes Miles better. He's cool, and his presence begins to usurp Scott's authority. At the same time, Scott's estranged mother has reentered his life and is threatening to disrupt the plans he has with his grandmother. 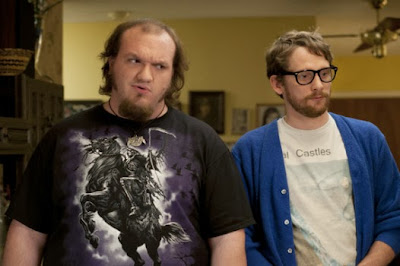 There is much of Scott Weidemeyer that I understand, though I would never be so pandering as to try to convince you that I am Scott Weidemeyer. There is a game of nerd one-upsmanship taking place in the online film community these days, where everyone is trying to establish that he or she has more credibility by virtue of being a bigger nerd -- again, part of the romanticism of nerd culture. I recognize Scott's passion. I can relate to his desire to retreat into a fantasy world. These things endear him to me. But I have always been the kind of nerd that can hide it pretty well -- not that I'm ashamed of my nerdiness, but that I'm still able to function in day to day life and interact with people in a way that the abrasive Scott Weidemeyer cannot. What I like best about Zero Charisma is that it neither excuses nor apologizes for Scott's personality, merely presenting him warts and all. And there are a lot of warts.

The decision to focus almost entirely on Scott is a good one, too, as the movie could very easily have turned into a nerd vs. hipster "contest" movie with too obvious a villain -- there is a quick party montage that's one of the best and most succinct takedowns of hipsterism I have ever seen. Miles is a good character and Graham (who is channeling James Franco, intentionally or otherwise) plays him well, even if the direction he eventually takes makes it pretty clear what side the filmmakers are on. Not all of the hipsters are monsters; Miles' girlfriend (played by Katie Folger of Grow Up, Tony Phillips, a lovely actress who needs to be in every movie) is sweet and patient without being a complete pushover. Even Miles doesn't initially start playing the game ironically or to mock it, even if a big part of his reasoning is because he's impressed with himself for doing so. We live in the age of everyone being impressed with themselves for everything they do, and it's nice to see a movie that gets that without being too heavy-handed about the observation. 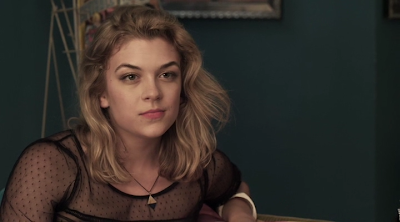 The character Sam Eidson creates makes for an interesting chicken/egg debate: is Scott's personality so prickly and off-putting because of his single-minded passion for tabletop gaming, or was he drawn to tabletop gaming because it's a hobby that supports his difficult personality? Co-director Matthews' screenplay offers some explanation for Scott's difficulties functioning -- his home life was far from perfect -- but it never wants us to pity him or overlook the fact that he can be very difficult to love. But growth is possible, and Zero Charisma is hopeful about our ability to better ourselves.

Zero Charisma is a terrific character study -- the kind of small movie worth seeking out on VOD (it's available now). It may not be one of my favorite movies of the year (not every movie can be), but it's one of the first movies I've ever seen that really nails a specific kind of person. Sometimes, that's all we can ask a movie to do -- to find a slice of underrepresented humanity and reflect it back to us accurately. Here's a movie that does that. We don't have to like Sam Eidson, but at least we can try and understand him.

Zero Charisma is currently playing in limited release and is available on VOD and iTunes.
Posted by Patrick Bromley at 7:52 AM