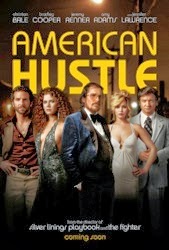 American Hustle is a crazy mess of a movie, but one I’m really starting to like. It’s over-directed, overacted and exhausting but also consistently funny, ambitious and pretty provocative. I haven’t had such a hard time pinning down a movie in quite a while. It actually kept me up most of the night I saw it and I am eager to see it again.

Being away from it for about 24 hours now, I’m starting to think the manic tone and unwieldy structure of American Hustle is part of writer-director David O. Russell’s point with the movie. It’s about small-time operators (con-men, FBI grunts, non-glitzy politicians, stay-at-home wives) who delude themselves into thinking that they are larger than their lives, so shouldn’t a movie containing those characters follow suit in its tone? In story, American Hustle is akin to something like Matchstick Men,but the stylistic choices Russell decides upon make the movie feel closer to Casino.

The plot in brief: Con man Irving Rosenfeld (Christian Bale) and his partner/mistress Sydney Prosser (Amy Adams) get busted and are forced to work with FBI agent Richie DiMaso (Bradley Cooper) to clear their criminal records. To do that, Irving and Sydney have to take down corrupt New Jersey politicians including Carmine Polito (Jeremy Renner) and some even more shady associates. The already dangerous situation escalates and is exacerbated by Irving’s young, fly-in-the-ointment wife Rosalyn (Jennifer Lawrence). 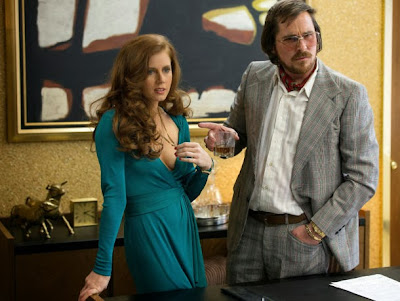 The positives in American Hustle outweigh the negatives, but there are a few problem spots. The production design, costuming and especially the hairstyles are so garish that they become a distraction at a certain point. It’s the late '70s in New York and New Jersey, so some of the tackiness of the time is reasonable, but it’s so over-the-top that it took a good minute or two to acclimate to what the actors are wearing in certain scenes before I was able to settle in -- especially in the cases of Amy Adams’ revealing wardrobes or Bradley Cooper’s curly hair. Also, Russell goes fucking crazy with the soundtrack in this movie. There are a number of scenes that would benefit from quieter moments, but the actors are fighting over a soundtrack similar to Martin Scorsese’s oppressive music cues in some of Mean Streets.

As for what’s good, the performances are first and foremost what works about the movie. Christian Bale unsurprisingly got me to completely believe he’s an overweight, balding con artist and makes the interesting choice of being the calm in the storm, along with his co-star Amy Adams. Adams gives one of my two favorite performances in the movie as a woman who makes up her identity out of whole cloth. Her courtship with Bale (which makes up the early part of the movie) is very sweet and gives the rest of American Hustle the heart it so desperately needs to combat with the overwhelming style. Rounding out the cast, Bradley Cooper is very good as Richie, even more so when you see his character’s arc realized. It’s a very funny and maybe even brave performance.

His counterpart in some of the movie’s best scenes is comedian Louis C.K. (giving my other favorite performance in American Hustle), who plays Cooper’s superior. Their conversations are the funniest parts of American Hustle and the two have really good chemistry bouncing off one another. Jeremy Renner is solid and sympathetic in a role with only an average amount of screen time. Finally, the scarily talented Jennifer Lawrence gives an out-of-control comedic performance that is equal parts fantastic and overbearing. It’s a movie star turn for sure, basically coming in like a tornado and leaving you grinning while you think “I like her” to yourself. The performance matches the neurotic character as written and, along with Cooper's manic energy, she’s probably the most of-the-piece in terms of the tone Russell is going for. 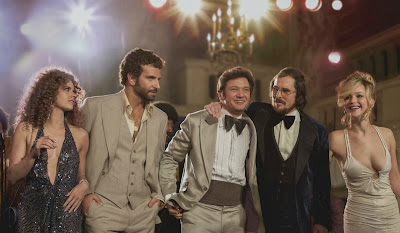 I admire that Russell is trying something new with American Hustle. He could have easily repeated the success of his last two movies by focusing on character relationships amidst formula scenarios (albeit to tremendous success), but he doesn’t do that here. He is swinging for the fences and, while not entirely successful, his movie feels alive and propulsive. I also admire what it’s trying to say about people living in false identities they created for themselves and fighting like crazy to continue living the lie. It could be as simple as appearing to have hair when you’re bald, or as complex as creating an entirely false persona of British elegance.

I wanted to love American Hustle right off the bat, as I did with The Fighter and Silver Linings Playbook, but I know I need more time to warm up to this one. That’s fine by me because I don’t mind putting in the time when the product is this entertaining. 2013 is a year of very few great movies. There are many (including The Spectacular Now and Enough Said) that achieve greatness at some moments and drive me crazy at others. American Hustle resides in that camp. I don’t know if it will make my top 10 movies of the year, but it has some of the best movie moments of 2013. That is worth noting and appreciating.
Posted by Patrick Bromley at 7:58 AM