This Ringo never drummed for The Beatles, but he was one of the fastest guns in all of spaghetti westerns. As the theme song tells us, “Ringo had an angel face, but whenever Ringo loved, Ringo fought.”

I’m crazy for spaghetti westerns. I go absolutely nuts for them, and I find myself tracking down the best possible DVD transfers that I can get my hands on. They’re just so collectible. There were only a certain number of them made during a particular window of time. While you can still see movies inspired by spaghetti westerns, the actual historical spaghetti westerns themselves are a thing of the past, meaning there’s a finite number of them. It’s something you can pursue and collect and actually reach an end point. Like Pokemon (or whatever the kids are collecting these days), you can collect them all. And I don’t know if it’s the cold outside or the fact that we’re in the theatrical dead season, but I’ve really been feeling the fever lately. The west is calling me. Or in this case, Spain and Italy.

In the pantheon of notable spaghetti westerns, there are several tiers of quality and influence. At the very top you’ll find the works of Sergio Leone: movies like The Good, The Bad, and the Ugly and Once Upon a Time in the West stand head and shoulders above all their peers. Below that is a lesser tier, but one that is also pretty outstanding. It’s at this level that you find films like the original Django and The Big Gundown. Directors like Sergio Corbucci and Sergio Sollima join Sergio Leone to form a trio of Sergios responsible for some of the finest westerns ever made. 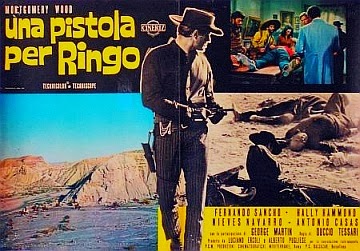 But below that there is a third one, where MOST spaghetti westerns live. These are the films that were financially and artistically successful but that never quite rose to the heights of popularity of the movies in the top two tiers. It’s here that you’ll find the two main entries in the Ringo series. There were other movies that used the name Ringo during the Italian western boom, but only the first two are considered the real thing. I recently watched them in a double feature and had a blast with them. I recommend you watch them both. Here’s why.

A Pistol For Ringo (1965) was directed by Duccio Tessari, who had found some recognition in Europe for co-writing A Fistful of Dollars with Sergio Leone, as well as for his contributions to sword and sandal fad of the late ‘50s and early ‘60s. It was there he collaborated with a stuntman-turned-actor named Giuliano Gemma, who he hired here to play the gunslinger Ringo.

Giuliano Gemma is billed here as Montgomery Wood (a fine American name for a fine Italian actor), a handsome, clean-shaven blond dude who goes by the nickname “Angel Face.” He’s about as far as you can get from Eastwood’s Man with No Name. In A Pistol for Ringo, Ringo is SUPER chatty and all smiles. He doesn’t drink alcohol, but chugs milk at the bar instead. Sometimes you wish Ringo would shut up, but he never does. He just keeps on chatting it up with anyone in frame with him, looking all handsome and stuff. I think his teeth even glisten in the sun, like a commercial for Crest toothpaste.

But this Aryan cowboy is the fastest gun around, and within the first couple of minutes of the movie he guns down four foes DURING A GAME OF HOPSCOTCH. You just passed your badass certification exam, Mr. Ringo. Here’s your membership card. And a glass of milk, because we know how you roll. 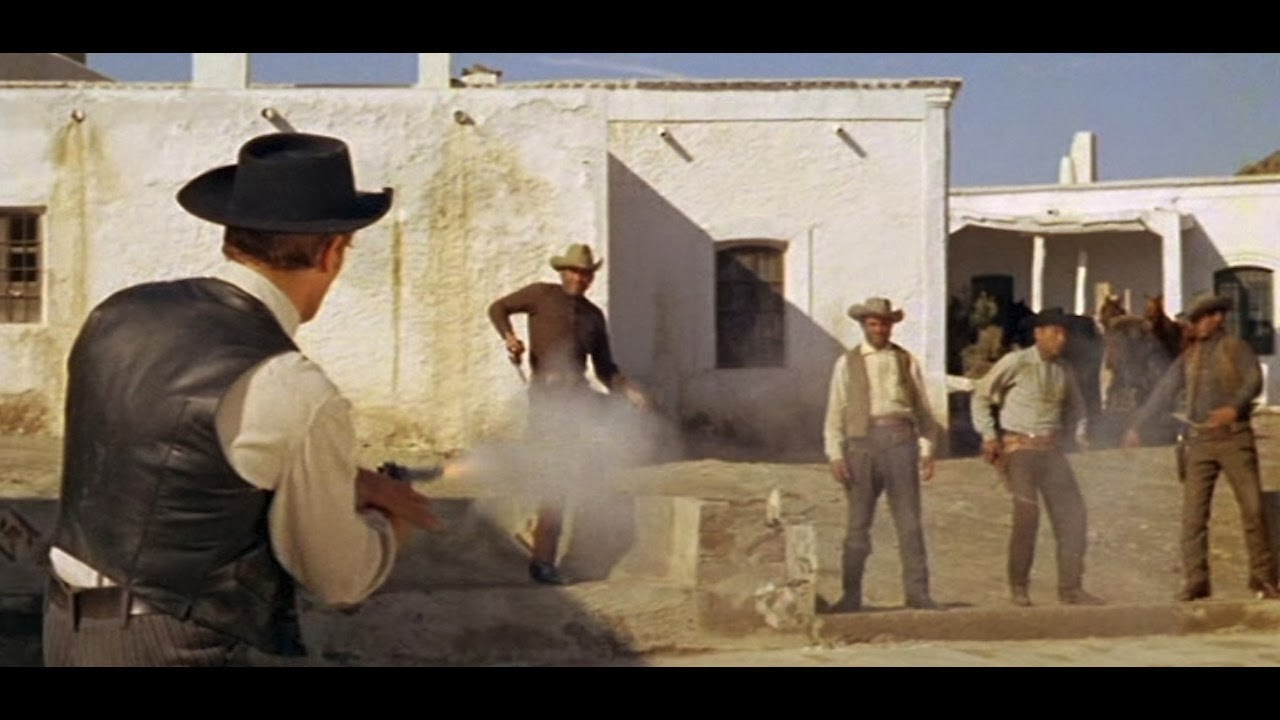 I’ll leave the vagueries of the plot out of this column (it’s a bit like Fistful of Dollars with Ringo playing two sides) and instead focus on two things that make this a really interesting entry into the Euro-western genre. The first is that this film is more or less a comedy. I mean, it’s a comedy in which innocent hostages are shot like animals, but a comedy nonetheless. And secondly, the film is set at Christmas time, which is something I can’t recall ever seeing in another western, period. I’m sure there are others out there, but this one was a first for me. So there are lots of people wishing a Merry Christmas as they walk by the screen, and it’s kind of weird to see Christmas trees in a western.

Because Giuliano Gemma was a stunt man before he was a leading man, he’s got some pretty nice skills. There’s a particularly cool scene where he dismounts from a galloping horse in a long tracking shot. You see the horse going pretty frickin’ fast, you see the dude on the horse, then he just kind of hops off and runs up to a guy and starts a conversation, all in a one-shot, like that’s just something people do. It’s impressive. Skills, man. Skills.

The legendary Ennio Morricone gives the film a very traditional score. I suppose this is where I should also mention that A Pistol for Ringo is a very old-fashioned film and doesn’t have the pop flair of most spaghetti westerns. There’s not a lot of rock and roll to the movie; Tessari seems to have older American influences, and wants to ape those for this initial outing. People who know more about these things than I do have said that he mimics John Ford’s famous shots, but I can only tell you that the movie has a lush score and plays out like a comedy/drama (where innocent hostages are shot like animals). It definitely feels very much apart from the more violent, gritty Euro Westerns being produced during the time. It feels quaint and old fashioned, like an American western from the 1940s or '50s. But, again, with hostages being shot like animals.

On it’s own, A Pistol for Ringo is fun, if largely forgettable. But it made a lot of money in 1965. Though it was shot AFTER A Fistful of Dollars(1964), it hit America two years BEFORE that movie did (1967), so it had a pretty good run, enough to justify a sequel. People were all like “Say, this Angel Face fella sure is a swell do-gooder, even if he does kill folks while playin’ hopscotch! That’s the hero we need for Lyndon Johnson’s America!” And that’s where it gets interesting.

As with most European sequels, The Return of Ringo uses entirely the same cast, the same director and the same locations as its predecessor, but goes for something very different. Whereas A Pistol for Ringo was a comedy, The Return of Ringo is a gritty revenge film. Where Gemma was chatty, blonde and handsome in the former, he’s silent, stoic, and rugged in the latter. It’s really something.

The Return of Ringo has the title character returning home from the Civil War a broken man. He discovers that his village has been overtaken by Mexican bandits who have killed his parents. His wife is going to be married against her will to one of the Mexican outlaws. They think Ringo is dead, so he goes undercover as a Mexican (which is as racist as it sounds, but it kind of works within the movie) to infiltrate the gang and destroy them from within when the time is right.

The Return of Ringo is grim (though still not overtly violent), and is miles away from the first film’s tone. Morricone’s score is EPIC in every sense of the word, and it’s what you want from him, though still playing more with traditional Hollywood western motifs instead of the whip-cracks and electric guitars we’d associate him with in Leone’s work. There’s even a culminating moment where the score rises to a crescendo and horns blare. It’s a GREAT score.

I came away from this movie with a deep appreciation for Giuliano Gemma. After A Pistol for Ringo, I had him pegged for an affable, charming hero type, but The Return of Ringo allows him to give a completely different performance. Seriously, none of the traits he exhibits in the first movie are in the second. It almost feels like a different actor, and I mean that in the best possible way. He showed a lot of range. I’ll be pursuing his other films. And Return of Ringo totally elevates the first movie because you can see how far outside the lines Tessari was coloring. And for the same director and group of actors to turn in two movies that feel so profoundly different from each other implies a ton of talent and ability.

The Return of Ringo is the film for which Duccio Tessari is remembered, but when viewed on itss own it can be easy to overlook his achievement. It’s only in light of watching both films that you can truly appreciate what he does in the sequel.

For a long time these movies were unavailable in America, or were only available in those sets that have a dozen movies in stretched aspect ratios and washed out fifth generation copies. There was a version of A Pistol for Ringo on YouTube for a while, but it was in Italian only and didn’t contain subtitles. Last summer, Timeless Media (a subsidiary of Shout! Factory) released a four-film set that contained both of the Tessari/Gemma films, plus one of the bastard films that used Ringo’s name in the title but didn’t involve either Tessari or Gemma. Those discs feature the best transfer available in America up to date, which is not anamorphic nor what you’d expect from a legitimate release. However, there’s a Region 2 DVD with a pristine, near-reference quality for both of these films. Even better: both films are now on YouTube in their widescreen versions looking pretty fantastic and in English. As of this writing, you could be watching both movies right now. For free.

If you like westerns and I have failed to persuade you to watch these, maybe it will help you to know that both films frequently rank very highly on “Best Of’ lists for the genre. If that doesn’t do it, I should also tell you that Quentin Tarantino placed both of these in his top 20 Spaghetti Westerns list. Going back to my tier system, I still believe that these belong on that third tier. There are many better spaghetti westerns out there that are absolutely essential viewing, but Ringo definitely deserve a spot at the bar, just a few seats down from The Man With No Name and Django.
Posted by Patrick Bromley at 12:06 PM

Email ThisBlogThis!Share to TwitterShare to FacebookShare to Pinterest
Labels: a pistol for ringo, heath holland on, quentin tarantino, spaghetti westerns, the return of ringo, westerns