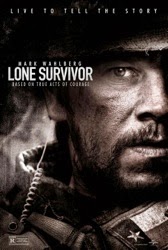 This is a tough one, so promise to hear me out.

Maybe I can't have an opinion on Peter Berg's latest movie, Lone Survivor, based on Marcus Luttrell's book. This movie was not made for me. This movie was made for the men and women of the armed forces, as it is a tribute to them that's ultimately concerned with getting every detail right -- not just of the mission that ultimately went wrong, but of the way they speak, interact, follow protocol, everything. Berg is in love with the military, and Lone Survivor is a love letter told in fetishistic detail.

Mark Wahlberg stars as Luttrell, one of four Navy SEALS deployed on Operation Red Wings, a failed 2005 attempt to capture or kill Taliban leader Ahmad Shah during the war in Afghanistan. Shortly after dropping onto a mountain, the team (also consisting of Taylor Kitsch, Emile Hirsh and Ben Foster) comes under attack and has to fight off a small army of Taliban fighters. If you are unsure how it turns out, look no further than the title.

I find myself in a terrible position talking about this movie, as it is impossible to be critical of Lone Survivor and not sound like I am being critical of the real-life men who died in the mission or the military at large. I am not. They -- like everyone in the military -- have my utmost respect. My unease with the movie is only in the telling, not in what is being told. 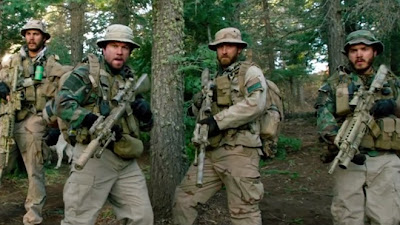 I just don't know what movie this is supposed to be. Perhaps it's the marketing to which I'm objecting, which keeps positioning the movie as an inspirational story of bravery and heroism (even the one sheet sells it as "Based on True Acts of Courage"). To me it's a tragedy. These men should not have died. A lot of people die on both sides, in fact, and for what? This is not me questioning the war in Afghanistan. That's a different conversation. What I'm saying is that the way Lone Survivor is being marketed is very different than the movie that exists.

What is it that Berg wants to achieve? I assume it's to tell as large a population as possible (and it is a large population; the movie grossed a stunning $38 million its opening weekend) what happened during Operation Red Wing. Luttrell himself has said that more people will see the movie than will ever read his book. My issue is that Berg treats it all like an action movie procedural, focusing more on the bullets that are fired than on the people firing them. I can understand a version of Lone Survivor that truly tries to put a human face on the three Americans who fought and died on that mountain in 2005. They deserve it. But aside from a few quick lines that attempt to sketch them out (like how Hirsch, playing Danny Dietz, is preoccupied with choosing paint colors), the movie makes little attempt to get to know its characters. It prefers the mission. 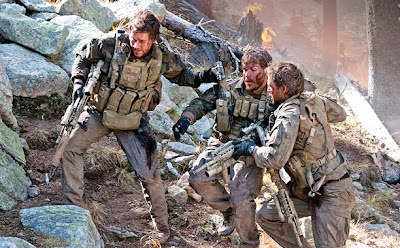 And therein lies more stickiness, because as Truffaut once said, it's impossible to make an anti-war film without making war look exciting. Berg certainly attempts to strip away some of the romanticism -- the firefights feel dangerous and terrifying, and the combat is brutal (there are multiple falls down the side of a mountain that look like the most painful thing you've ever seen). But he also can't help shooting it like an action movie, so we get the cool guitar score by Explosions in the Sky (a Berg favorite since Friday Night Lights) and our heroes get lots of slow motion moments. While the Taliban remain faceless bodies who burst into squibs when shot, the SEALS get slow motion Terrence Malick "movie" deaths. For all of Lone Survivor's attempts to create harrowing, realistic combat (in its best moments recalling the opening of Saving Private Ryan), it still insists on presenting war as cinematic. Not exciting, but cinematic.

Lone Survivor is a well-made movie. The cast is strong and Berg is a very talented filmmaker. But he has made a film that feels confused, as his obsession with the military (and if you don't believe me, just watch how he turned the board game movie Battleship into crazy armed forces porn) can sometimes cloud the choices he makes. For the people that need this movie -- those who have fought in wars or have lost loved ones in combat -- I'm glad it exists. The rest of us may not get out of it what Berg wants; part docudrama, part propaganda piece, Lone Survivor tells the sad account of 19 American and countless Afghani deaths as an action movie much more concerned with the "what" than the "who." 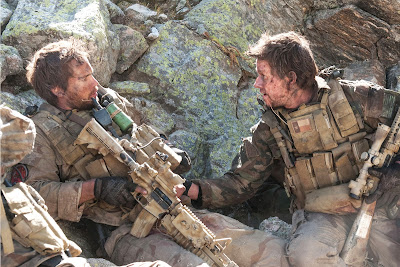 Posted by Patrick Bromley at 12:11 PM