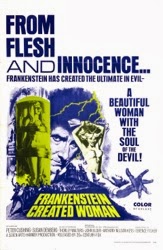 This is one of my favorite Hammer movies yet.

What a pleasant surprise 1967's Frankenstein Created Woman, newly released on Blu-ray by Millennium Entertainment, turned out to be. Directed by the great Terence Fisher, who did all of Hammer's best films, it stands out by being different from every other movie the studio made -- and not just because Frankenstein's monster is female this time. Also, "monster" is hardly the word I'd use. 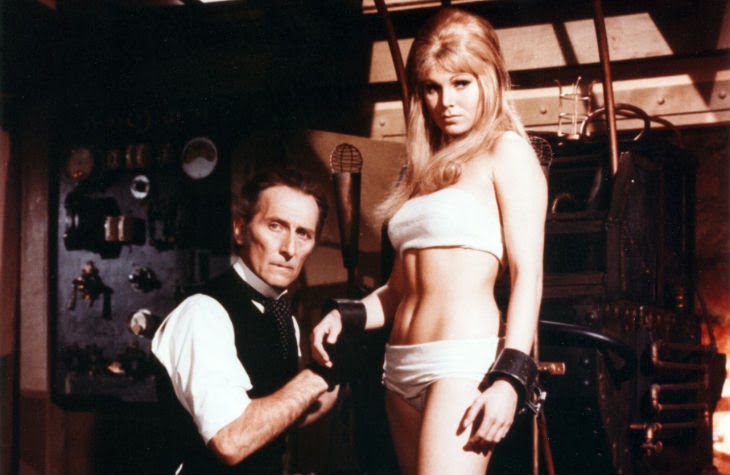 Peter Cushing once again plays Baron Victor Frankenstein, who opens the film by experimenting on himself: he allows himself to die for exactly 60 minutes to see if his soul will leave his body (he's the original Flatliner). To celebrate the success of his experiment, he's sends his assistant Hans (Robert Morris) to the local inn to buy a bottle of champagne. It's there that Hans' lover, the partially paralyzed and disfigured innkeeper's daughter Christina (Susan Denberg) is mercilessly mocked by three rich assholes who stop in for a drink. Hans loses his temper and fights them. The rich assholes retaliate by murdering the Christina's father and framing Hans, who is executed for the crime. A heartbroken Christina throws herself into the river, giving Frankenstein an idea: can he put the soul of the recently-deceased Hans into the recently-deceased Christina? And if he succeeds, what kind of bloodthirsty monster will it create?

One of the fascinating aspects of Hammer's first (only?) werewolf movie, 1957's Curse of the Werewolf, is just how much time it spends on backstory before getting to any werewolf stuff -- the movie literally starts 15 years before the Oliver Reed character is even conceived, much less born. There's a crazy begger, an evil Marques, a mute woman, rape, murder, imprisonment and a guy dancing for chicken. This is before Leon (Reed) is born, before we see him grow into an adult, before he ever turns into a werewolf. Where that movie chooses to start its story is crazy. It's also my favorite stuff in the movie.

Frankenstein Created Woman appears to take a page from Curse of the Werewolf, spending a ton of time on backstory before it gets into the any of the sort of plot we've come to expect. The difference this time is that it's not prologue only tangentially related to the plot; after a short opening in which we see Hans' father executed, all of the major players are introduced. It still takes a long time (like, more than two-thirds of a 90-minute film) for Frankenstein to make a monster, but at least its time spent with the characters that drive the story. Just like with Curse, it's all this background character stuff that's the most compelling in the movie; once it becomes a more traditional monster movie, it's easy to see where everything is going. Though to be fair, any film in which a woman is ordered to kill by a decapitated head she carries around with her can hardy be called "traditional." 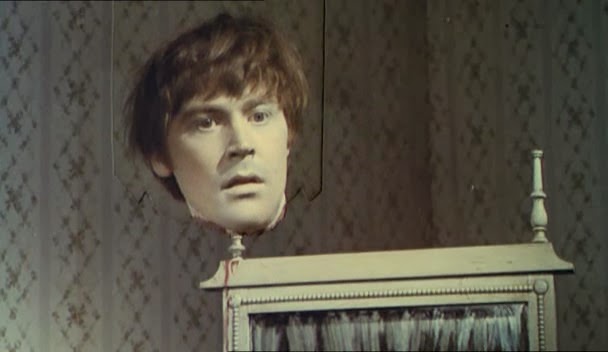 In case you haven't already pieced it together, Frankenstein Created Woman is a crazy movie. It hides its craziness well, though, passing itself off with the ornate production design and stately Britishness of so many Hammer films (one of the best things about Hammer is that they seem to produce costume dramas, but behind all the bodices and cravats is a ton of transgressive stuff). It's only when you scratch the surface that you realize just how nutty it is. There's already something goofy about a movie the declares the death of God embracing the concept of The Soul, suggesting that it not only exists but can survive death. It's as though screenwriter Anthony Hinds knew that the audience was used to accepting the traditional building-a-monster myth of the Frankenstein story and set out to tell a story that required even further suspension of disbelief. That it works is due in large part to Peter Cushing's performance; he's utterly matter-of-fact about the existence of the soul.

But the craziness is everywhere in the movie as soon as you start to actually break down anything that happens. Why, for example, is Christina disfigured in life but the cured and physically beautiful once she becomes Frankenstein's creation? Is the film trying to say something about monsters? That the Christina that looks "monstrous" is sweet and gentle but the one who is beautiful is a monster on the inside? Aside from that dichotomy, there is no actual commentary.

Better still, why establish that Hans' father was a murderer in the film's prologue, which shows a young Hans watching his father beheaded in the guillotine? It seems to set up that Hans himself will be a murderer -- that the murder gene was passed down to him and he can snap at any minute. Only (SPOILERS) he's not a murderer. He gets angry and fights with the rich assholes because he's defending the honor of the woman he loves, ultimately being executed for a crime he DID NOT COMMIT. When his soul is transferred into Christina, she's not driven to murder because she's possessed by a killer. The Hans/Christina hybrid is just looking for revenge. 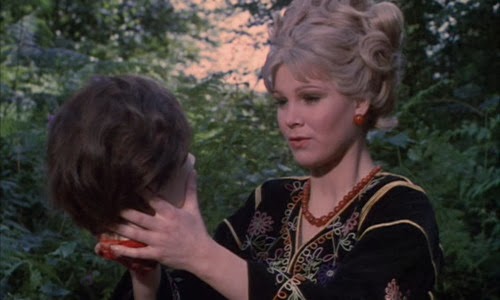 Despite the title, this is barely a horror movie. It's violent to be sure (lots of that special Hammer shade of blood) and there is a Frankenstein character who does create a monster, but it's not of the built-from-parts-of-dead-people variety. It's just soul transference (he says as though that were a common thing), making Frankenstein Created Woman a kind of gothic body swap movie -- like Dream a Little Dream if Corey Feldman were carrying around Jason Robards disembodied head. It's different enough from every other variation on Frankenstein to keep things interesting and just fucking crazy enough to be a lot of fun.

Frankenstein Created Woman casts a spell. Arthur Grant's photography is once again beautiful (he also shot Curse of the Werewolf) and James Bernard's score is hypnotic. The movie is not anything I expected it to be, and it's all the better for it.
Posted by Patrick Bromley at 7:50 AM